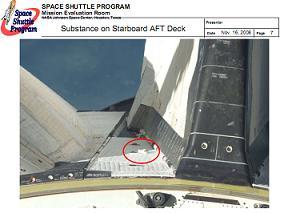 The “Leonardo” Multi-Purpose Logistics Module (MPLM) has been transferred from Endeavour’s payload bay to Node 2 of the International Space Station (ISS) on Flight Day 4 of STS-126. Meanwhile, images of Endeavour’s External Tank (ET-129) show what may be the cleanest even tank – with only around three small areas of foam loss, with Endeavour already cleared from Focused Inspection requirements.

STS-126 is proceeding without issue, and is currently slightly ahead of the timeline. A smooth transition for the MPLM to the ISS was vital, to allow the crew to begin their series of transfers that will play a major role in providing equipment for the future six person crew on the Station.

“MPLM Docking to Node 2 Nadir: MPLM mated to Node 2 Nadir for the first time on ULF-2 (STS-126). The system functionality is the same as when berthed to Node 1,” noted an associated Flight Readiness Review (FRR) presentation.

“All procedures and flight rules have been updated to account for the change in location. Lessons learned from previous MPLM flights (were) reviewed and updated in the MPLM procedures to capture any changes/workarounds required.”

Seven tons of cargo was packed into the MPLM, which also included the utilization of the aft endcone, making STS-126 the heaviest logistics flight in shuttle history.

“MPLM and Stowage first time to berth MPLM to Node 2 Nadir. First flight of a completely full (16 racks) MPLM. First flight of MPLM Aft Endcone Stowage,” noted the mission firsts in the FRR presentation, which also noted that additional items will be returned from the ISS after the docked stage.

The transfer of items from Endeavour and the installed MPLM will take up a large part of the mission, which will prove to be challenging to the crew. However, managers recently cited the maturity of the STS-126 crew to ably pace themselves to complete the required tasks.

The Mission Management Team (MMT) are continuing to evaluate the huge array of imagery gained on Endeavour’s ascent on Friday, via FD2 and FD3 inspections, with several items still being worked by the Damage Assessment Team (DAT).

Items of interest include a couple of areas of minor – almost cosmetic – damage to the aft of Endeavour, such as OMS Pod tiles and the SSME (Space Shuttle Main Engine) dome heat shield. They are likely to be cleared.

Importantly, no damage has been observed on Endeavour’s critical TPS systems, as evaluations into RPM imagery (selection available in L2) continue.

The first area to be cleared was the starboard side of the vehicle – which was required ahead of MPLM unberthing, due to clearance issues with the OBSS (Orbiter Boom Sensor System), had a Focused Inspection been required.

“All RPM imagery has been downlinked and is being reviewed by the Damage Assessment Team (DAT). In addition, the DAT has been reviewing the SRMS survey imagery,” noted information on Monday. “The Orbiter Project Office (OPO) cleared the starboard side of the vehicle and gave Flight Control a go for MPLM unberthing on FD 4.

“The Reinforced Carbon-Carbon (RCC) Leading Edge Subsystem (LESS) had no focused inspection (FI) requirements for the starboard or port wings or the nose-cap. The DAT is analyzing the imagery to formally clear the regions of interest for the FD 4 OPO (Orbiter Project Office) meeting.

“The Thermal Protection System (TPS) had no FI (Focused Inspection) candidates on the starboard side. There are some protruding gap fillers at various locations, tile coating damage near the Left-Hand (LH) External Tank (ET) door tile with shallow damage and a broken dome heat shield tile.

“The DAT is continuing the analysis process and is confident that these areas will be cleared.” 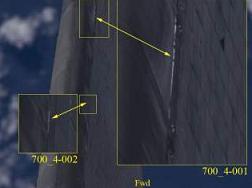 One gap filler referenced has been observed to be slightly protruding from below a RCC panel. It’s specific location is not yet documented. Another – less protruding – gap filler is also observed further down the wing.

While these will likely be cleared for re-entry, such a process may take slightly longer than most areas, due to the computational models required for how the gap fillers will ‘perform’ during re-entry. However, as of FD4, Endeavour has been cleared from any requirement of a Focused Inspection – a sign of how clean the orbiter is of damage.

The lack of any damage to Endeavour’s RCC panels and underbelly is thanks to what appears to be an amazing performance by ET-129’s TPS. Images taken from Endeavour’s umbilical well show a pristine tank, with only three very minor areas of foam loss.

A huge amount of improvements to the ET by engineers at Lockheed Martin’s Michoud Assembly Facility (MAF) since Return To Flight appear to be paying off, with no major foam loss from the tanks since STS-121.

Modifications will continue to take place on the tanks – although some items have been cancelled due to the vastly improved performance of late – with the end goal of making the final tank to fly with the shuttle the safest ever.