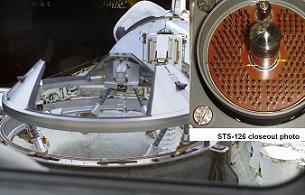 STS-126’s S0007 launch countdown operations have reached another milestone, with the retraction of the Rotating Service Structure (RSS), ahead of tanking on Friday morning. Processing continues to be issue-free, bar the late approval to fly ‘as-is’ with two bent pins on Orbiter Docking System (ODS) connector.

Final operations ahead of tanking have been taking place during Thursday, which included checks on Endeavour’s SSME’s (Space Shuttle Main Engines) and the activation of communication systems.

RSS retract operations began around 15 minutes ahead of schedule. While tanking is set to begin at 10:30 local time.

The latest issues was related to two male pins on one connector (184 pin X4 connector), which were observed as slightly bent a few days ago. This became a Cat II constraint – before finally receiving approval for flight on Thursday. 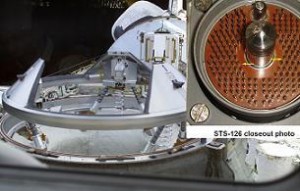 There four connectors equally spaced around the outer circumference of the ODS, although only about a dozen of the pins in each connector are active to transfer power and data (indicator) functions between the shuttle and the ISS when docked.

The function of the connectors come into affect when the orbiter docks with the ISS. A set of hooks clamp the connector (male) on the orbiter – with the female hardware – on the ISS – tightly together. This occurs after soft mate when the hooks activate to tightly clamp the vehicles together. The X-connectors make a hard mate during this operation.

The two pins in question are likely to be forced back into alignment, as the two vehicles are mated to hard mate. Analysis that cleared the issue to fly showed that no loss of operation would occur, even if the two pins were broken off during mating.

One other operation that took place ahead of RSS retract was the “late” stowage of items in Endeavour’s middeck, such as sensitive science experiments that will ride uphill with Endeavour.

The middeck payloads consist of the Commercial Generic Bioprocessing Apparatus Science Insert (CSI), which is an educational experiments for students.

“CSI-02 has examined seed germination in microgravity (gravitropism and phototropism) and crystal growth formation,” noted one presentation. “CSI-03 will be examining the complete life cycle of the painted lady butterfly and the ability of an orb-weaving spider to live in space.”

“NLP-Vaccine-2: contains pathogenetic organisms and is using spaceflight to develop potential vaccines for the prevention of infections on Earth.