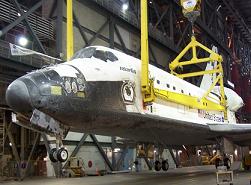 The three day launch countdown for STS-126 has begun, marking the start of S0007 operations – which will hopefully conclude with the launch of Endeavour at 7:55pm local time on Friday. Meanwhile, Atlantis has been towed back to her Orbiter Processing Facility (OPF-1), as a result of the rescheduling of STS-125.

Endeavour is issue free, following the confirmation that the Integrated Display Processing (CRT2 MEDS 1553) problem has been cleared for flight.

“The problem is not expected to impact flight ops since it only occurs at MDU power up, and MDU operation has not been affected. Currently, there are no Cat I constraints, and 34 Cat II constraints.”

The only concern at present is the weather that is expected in the local area around launch time, although this remains favorable. Should there be a delay to the November 14 launch date several mission options may come into play, relating to the arrival of the Russian Progress resupply vehicle (31P) – which is due to launch to the ISS later this month.

“The MMT (Mission Management Team) Prebrief was conducted (with) the discussion focused on potential decisions that may be required during the mission,” noted the latest MOD 8th Floor memo.

“The Progress 31P loiter plan allows STS-126 to launch as late as 11/21 and still allow one day between nominal undock and 31P docking. Use of the FD4 (Flight Day 4)pane on “two-pane” days was discussed. There is only FD3 capability on the nominal launch day of November 14 so this discussion only comes into play for a launch delay.

“If launch is scrubbed, the current plan is to use the FD4 pane if required to get off the pad on November 15th. ISS may request a one day mission extension if required to accomplish important sampling activities to support go/no-go decisions for six person crew. This decision could come as late as FD10 depending on how the mission is progressing.

“The focused inspection decision timeline is slightly unique for this mission since some locations on the starboard wingtip cannot be inspected after the MPLM is installed due to insufficient clearance with the SRMS/OBSS (Shuttle Remote Manipulator System/Orbiter Boom Sensor System).

An additional note related to the sensors on the Wing Leading Edge – known as the WLE IDS (Impact Detection System) which has registered a number of hits to the wing on orbit – though most aren’t actual impacts. This is due to the sensitivity of the system, which has since been refined.

“The Orbiter project also reviewed their new screening criteria for Wing Leading Edge sensor indications, which will reduce the number of false positives.”

Endeavour’s crew, led by Commander Chris Ferguson, also arrived at the Kennedy Space Center on Tuesday, following a T-38 ride from their home base in Houston.

Meanwhiile, Atlantis – now having to wait until at least May, 09, for an opportunity to fly on the flagship mission of servicing Hubble – has completed de-stack operations from her ET-127 stack, for a return to the home comforts of OPF-1.

Following demate operations over the past few days, Atlantis was lifted over into the transfer aisle of the Vehicle Assembly Building (VAB), in preparation for being towed back to OPF-1 – as opposed to being placed on the OTS (Orbiter Transporter System).

Engineers lowered Atlantis’ landing gear via a ground control unit – which is also used in the OPF to raise and lower the gear for checkouts and final retraction, via an interface box in the cabin which plugs into the gear control system. This is connected via a long cable through an open panel in the hatch.