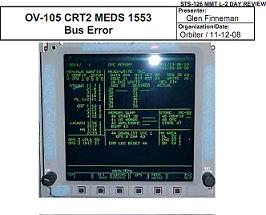 A loose washer on a ground support carrier plate is the only reported issue, as Endeavour heads towards launch day – in an amazingly issue-free S0007 launch countdown for STS-126. This follows a review of outstanding paperwork during the Mission Management Team (MMT) L-2 meeting.

Loading of Endeavour’s Power Reactant Storage and Distributation systems was completed in the early hours of Thursday morning, with the rest of the day being utilized for SSME (Space Shuttle Main Engine) preps – which began at 6am local time.

It is usual for a number of GSE (Ground Support Equipment) issues to arise during this stage of the countdown. However, as per Thursday’s morning report, only a loose washer on a Ground Umbilical Carrier Plate (GUCP) warranted a mention.

“PRSD was complete at 0323. LO2 / LH2 preps for Vehicle Loading currently In-Work, will be work throughout the day. SSME final preps will be In-Work at 0600 and will continue through the day,” noted Thursday processing information.

Other notes of reference relate to the alternative landing site, via weather latest and a number of broken lights on the runway at Edwards Air Force Base’s Dryden facility.

“Dryden update: All red lenses on the 6500 ft. and 7500 ft. PAPIs have shattered,” noted one example. “Spare lenses located at KSC and are being shipped overnight. We should be installing them Thursday afternoon (11/13).”

Such is the nature of STS-126’s smooth countdown, no L-1 brief is required by the MMT. This follows an issue-free L-2 MMT brief, which reviewed a number of previously documented notes of interest – all of which have been cleared.

A large amount of the L-2 MMT documentation (11 presentations in total – and available on L2) referenced the recent report – via a large Program Requirements Control Board) presentation – about the singular lack of a government inspector being used to certify the wiring vendors’ report, as per wiring used on the SSMEs, SRBs etc. Purely a paperwork issue that has since been resolved.

Other presentations dealt with recent issues on Endeavour, such as the Integrated Display Processor issue (CRT2 MEDS 1553), which has also been cleared for flying ‘as-is’.

“IDP error log indicates error due to “busy bit” in MDU status response and not the result of a 1553 bus transmission error. Function of IDP and CRT unaffected by the message.”

Because the issue only occurs during a specific power up sequence, the risk of the display being lost during flight is small – due to the unit remaining powered up during the mission. Engineers will troubleshoot the problem once Endeavour is back in her Orbiter Processing Facility (OPF), post flight.

“Flight Rationale: Error only occurs during a particular power on sequence that is used exclusively during ground processing. Error message is nuisance only, transient / self-clearing, is transparent to the crew, and does not impact hardware functionality. Adequate redundancy exists for worst case failure causing complete loss of this CRT MDU slot

“Recommendation: Accept observed signature for STS-126 and defer further troubleshooting to next flow.”

The largest L-2 MMT presentation was dedicated to an issue noted on the previous flight – STS-124 – which outlined the problem with Discovery’s multiplexer-demultiplexer (MDM) flight aft 2 (FA2) – which was replaced ahead of flight, after causing an off-nominal 2-1-1 spilt of the orbiter’s GPCs (General Purpose Computers). 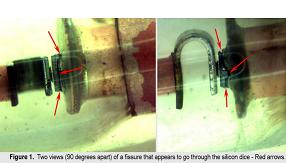 The 51 page presentation included numerous images of the electronics – even at the microscopic level – showing the failed diode in amazing detail.

“The failure resulted in a data processing system (DPS) redundant set split of the general purpose computers (GPCs). Root cause found to be failed diode on the SMIA (serial multiplexer interface adapter).

Flight rationale was already in place for STS-126, which has been backed up by the lack of related issues during the same stage of the processing flow for Endeavour.

“Flight rationale for STS-126: 1N3600 diode failure trend is low. Total of 17 failures all lots, all vendors for 1N3600. MDMs are powered on during any vehicle power up so more likely to see a failure occurrence on the ground than in flight,” added the presentation.

Upcoming milestones for STS-126 include the retraction of the Rotating Service Structure (RSS) at around 23:30 local time on Thursday night, with tanking of External Tank (ET-129) due to begin around 10:30 local time on Friday.