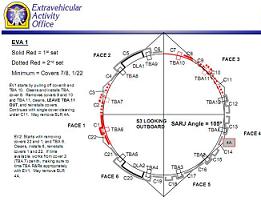 Spacewalkers Heidemarie Stefanyshyn-Piper (EV1), and Stephen Bowen (EV2) have completed the first of four EVAs planned for STS-126, which are centered around replacing the Trundle Bearing Assemblies (TBAs) – along with cleaning and lubricating tasks – on the troublesome starboard SARJ (Solar Alpha Rotary Joint).

An issue was worked ahead of the EVA, with issues noted with the Pan Tilt Unit (PTU) camera on the joint of the SRMS/OBSS (Shuttle Remote Manipulator/Orbiter Boom Sensor System). The camera is used to observe – among other items – EVAs and Late Inspections.

“We have begun looking at camera views that could be used to view the OBSS ITVC in the SARJ Cleaning, MPLM viewing, and Undock positions. So far, the Undock position seems to have the best viewing opportunities, but it is also very close to Late Inspection.

“We will continue to look at possible targets at which to point the camera in the different positions that could be used to help determine any offset in the PTU.”

Prior to the start of EVA-1, the PTV was put through a test, and appeared to work as required. Further evaluations will follow over the coming days. Engineers already believe they have a candidate for the issue.

“It was also noted that there are ties on the PTU cables for this flight, where on STS-122 there were no ties, and the cable moved freely during the pan/tilt reset manuever. It is not clear whether this tie could be impeding the PTU movement.

“(EV) verified that this tie was added due to concerns that the free moving cables could get caught during manuevers (this was witnessed during ground testing) and cause drag issues on the PTU.

“Ground testing indicated that the ties did not impede the PTU range of motion; however, (EV) said it is possible that shifting caused during ascent could have caused some cable movement. Further testing would be needed to determine if the cable ties are a factor.”

Flight Day 5 saw the spacewalkers perform the first of four planned EVAs, which involved the transfer the Nitrogen Tank Assembly from ISS to the payload bay, the transfer a spare part for the External Thermal Control System to ISS, and begin work on the Starboard Solar Alpha Rotary Joint (SARJ).

This work will continue over the course of the remaining EVAs, with the second on Thursday, the third on Saturday, and the fourth and final EVA will be conducted on Monday. 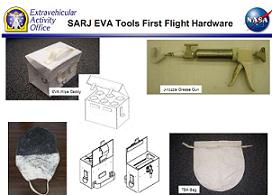 During EVA-1, the starboard SARJ was successfully cleaned and lubricated in the required locations for this spacewalk, while several Trundle Bearing Assemblies were also replaced. The spacewalkers used special tools to carry out the task, including a grease gun and a scrapper.

It appears that one of the grease guns used by Stefanyshyn-Piper leaked grease into her tool bag. While efforts were made to clean excess grease from her EMU gloves, a tool kit liberated from the bag, before floating away into space.

Stefanyshyn-Piper – although she can’t be blamed due to the grease incident before the bag floated away – apologized upon arriving back into the airlock after the near-seven hour EVA. However, controllers on the ground immediately praised the duo for their hard work.

EVA 2 will involve the relocation of the 2 CETA carts from the starboard side of the truss to the port side in preparation for SSRMS install of the S6 set of solar arrays on 15A. SARJ cleaning will continue, while the snare cables of the A side of the SSRMS will be lubricated to help ensure that the snares are completely out of the capture path for future HTV operations.