A series of Ares I Thrust Oscillation (TO) meetings have concluded with the decision to recommend baselining Ares I’s Tuned Mass Absorber (TMA) on the aft of the vehicle as a passive – as opposed to active – system, as the latest analysis – which has included human tests – reduce TO as a potential LOV/C (Loss of Vehicle and Crew) event to 1 in 150,000. Notes also reference that TO may not even affect Orion on two out of three launches, according to the latest computational data.

Also known as “Resonant Burning” – described as vortices that shed within the solid rocket motors during combustion due to the shearing of internal flow at propellant discontinuities – the issue relates to when the frequency of thrust oscillations is coincident with the acoustic modes of the motor cavity.

When pressure oscillations drive resonant modes in the vehicle structure, these oscillations are capable of rendering the astronauts incapacitated, or worse.

This was the major concern, that crew health was at risk during the few seconds TO occurs late in first stage flight. However, via recent engineering work that has created several options to mitigate TO on Ares I’s first stage reaching the crew seated in Orion, this risk has – it’s claimed – been eliminated.

This left engineers with the challenge of ensuring the mitigation techniques countered any potential issues of crew function – in other words, that TO would not hinder the crew from carrying out manual commands during the four to five seconds of a TO event during first stage.

Currently two engineering options have been baselined into the vehicle, with a third likely to be added during next year’s Ares I Delta PDR (Preliminary Design Review).

One is a set of “shock absorbers” that will be added to the aft skirt of Ares I. Known in some documentation as the Skirt TOA (Tuned Oscillating Arrays) Concept, but commonly known as the Tuned Mass Absorbers (TMA) concept, 16 actuators are placed around the circumference of the aft to counter the oscillations.

This was classed as an active system – one which would react to the oscillations as required, with the contingency of still being able to mitigate a large amount of TO, should one or more actuators failed.

This has since moved to a passive system, following the series of meetings that concluded last week.

Some engineers at the Marshall Space Flight Center (MSFC) are still arguing for an active system, with findings heading to NASA HQ this week for review by NASA administrator Mike Griffin, who is continuing to be ‘hands on’ with Ares I/Orion’s development.

The final decision will be important, due to the passive system holding less mass penalties on the vehicle than the active concept, along with an indication into the current level of confidence that TO is losing its footing as a major problem for Ares I.

The second area of mitigation is at the interstage are of Ares I. 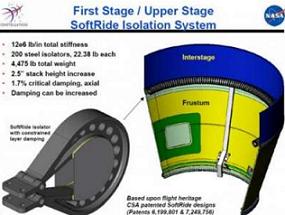 This concept is called the SoftRide Isolator – a set of 200 brackets, weighing a total of two tons, that fit around the circumference of the joint between the frustum and interstage.

Notes of concern were raised a few months ago, relating to their ability to mitigate the oscillations as planned, and that they could exacerbate potential vehicle buckling at the interstage. This was know as “local bending moment due to load eccentricity”.

This led to a redesign of the isolators to “reduce or eliminate” that threat. Work is continuing on the design, though it remains baselined as one of the main elements of TO mitigation at this time.

The third option – which was deferred until 2009 in order to avoid a delay to August’s main PDR for Ares I – relates to isolating the crew seats from most of the remaining oscillations that could ride up the vehicle from the first stage.

This remains on the cards for being added to Orion in 2009, following its references in the latest meetings, which backs up the documentation from Orion’s Lockheed Martin engineers that the isolation ‘crate’ will become a “Change Request” in 2009 – which they complained was yet another change to the vehicle, causing problems with their wish to work with a stable design.

Notes from the meetings (listed on L2) make for interesting reading, with most of the previous engineering overviews showing wide-scale concerns about both the effect of TO on the vehicle, and issues with the planned mitigation techniques. Notes from previous meetings have almost been completely detached from the overly positive overviews given by Ares I managers at media briefings.

However, the latest meeting shows a sea change towards the positive, following an overview of analysis work that has been carried out over the last few months.

It is now understood that there is close to an engineering consensus that the combined mass absorbers on the aft, in combination with the interstage isolator are deemed as capable of “doing the job”.

That job is to ensure crew health remains within requirements when TO occurs during late first stage flight, and within the limits of crew function. The latest risk number of 1 in 150,000 relates to an incident where the crew have to carry out a manual function in Orion, during the five seconds of a TO event.

Engineers found that the only time a manual command would be required at this stage of flight would be via the need to manually abort the mission. Given the onboard computers handle such aborts, the manual command would only be required during a severe system failure – such as an automated failure of Orion’s flight computers – thus reducing the likelihood yet further.

“Evaluations on the ‘probabilistic’ analysis looked at the flight time sequence, and the probability that TO will occur,” notes from the meeting add. “(We) looked at the probability of what event will be likely to occur that would required the crew to react, to a potential abort scenario they have to respond manually. In the final analysis, most of tasks can be/will be done faster and more reliably by computer.”

The analysis also showed that TO may only “occur” – or affect Orion – once in every three flights. This in itself is a major finding, though there is a counter argument that claims that this points towards the computational models – known as “Monte Carlo runs” – suffering from inaccuracies.

On crew function, human tests were carried out on the ability of a crew member being able to carry out a manual function during a TO event. These tests have been carried out at NASA Ames, to determine “what is the TO ‘g’ level that the crew are unable to function at.”

This involved a “two group test”. One group consisted of 16 civilian volunteers with age matching the crew. The second group was made up of around six astronauts.

The crew member was tested in Ames’ centrifuge for 145 second to see if they can read displays on a mock up Orion computer readout – located an arm’s length away, at a font size of 2, 10, 14, whilst being put through simulated g force thrust oscillations.

The results showed that at 10 font, crew incurs reading error of 5 percent at 0.3g, and 10 percent at 1.0g, which added confidence that crew function would not be seriously hindered during various levels of expected TO post-mitigation.

The conclusion, based on this latest set of results, has reduced TO as a threat to the development of the Ares I vehicle to a rank of 35th of the risk matrix list. Previously it was consistently in the top three.

More work is required over the coming year, with a requirement to decipher data to see if engineers can separate g-load vs. time vs. frequency for more wide-ranging results. Additional crew test data will also be carried out as required. 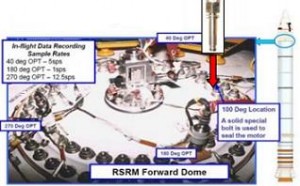 Ultimately, the first real data point engineers will have at their disposal will come via the test flight of the five segment Ares I-Y in 2011.

Additional data will be forthcoming in the interim period, with additional booster instrumentation flying on downstream shuttle flights, along with ATK RSRM test fires in Utah, and the four segment Ares I-X launch in either July or October, 09.

L2 members: All documentation – from which the above article has quoted snippets – is available in full in the related L2 sections, now over 4000 gbs in size, which includes the world’s largest collection of  unrestricted Constellation documentation and video outside of NASA computers.