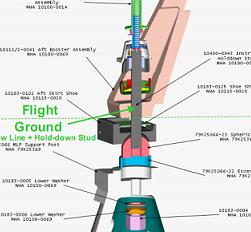 The Shuttle Carrier Aircraft (SCA) has returned Endeavour to Florida on Friday, following a cross country ferry trip that has seen large crowds greet the duo in Texas and Louisiana. Meanwhile, shuttle managers have completed a post mission IFA (In Flight Anomaly) review of STS-126, with highlights including information on a holddown post issue.

Large crowds and numerous youtube videos of the SCA and Endeavour pairing have marked their trip from Edwards Air Force Base, which took in a brief stop at Fort Bliss’ Biggs Airfield, Texas, before heading for an overnight stay at Fort Worth, Texas on Wednesday.

The second leg ended with another overnight stay on Thursday in Barksdale, Louisiana – following a slight detour via the Johnson Space Center (JSC), where the duo circled the Houston base around five times, providing a stunning sight to workers congregated in the parking lots.

The decision to carry out the flyby of JSC was left to the last minute, so as to ensure acceptable weather conditions in the local area. The event was part of NASA’s 50th Anniversary celebrations, and was the first visit by a SCA/Orbiter duo since Challenger paid a visit to Houston in 1983.

Original plans pointed towards Endeavour and the SCA arriving back at the Shuttle Landing Facility (SLF) on Thursday, before a weather front blocked their path. An overnight stay in Barksdale then became the plan, ahead of the Friday departure that concluded with a landing in Florida in the afternoon.

Meanwhile, Thursday marked the final major engineering overview of STS-126, via the post flight IFA review – which involves the presentation of over 12 documents (all available to download on L2) outlining every aspect of the mission and any noted anomalies.

These reviews range from EVAs to flight software, launch/ascent issues to the performance of the External Tank and so on – most of which will be collated into articles on this site over the next few weeks.

The first issue of note relates to the time of ignition, T-0 – classed as the “Holddown Post (HDP) #3 Debris Containment System (DCS) Failure,” which received references as part of the Solid Rocket Booster IFA review presentation.

There are four holddown posts (studs) on each booster, with each stud 28 inches long and 3.5 inches in diameter.

The stud has a frangible nut at the top end, which contains two NASA Standard Detonators (NSD), which are fired at the time of SRB ignition, breaking the nut and releases the connection between the vehicle and the post.

Interestingly, this was the first launch with the newly modified holddown bolts – first aimed at STS-125, before that mission was delayed until 2009 – although it is not clear if that is related to the incident noted on the IFA presentation. 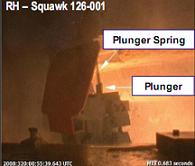 The event, which led to some of the debris from the holddown post liberating away from the containment system – which avoids such debris from potentially striking the vehicle during lift-off – was last seen on the STS-56 launch.

The SRB Blast Container (BC) Debris Containment System (DCS) has the purpose to contain frangible nut debris when the stud travels aft with plunger after frangible nut fractures. 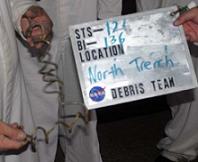 As to where the debris travelled, engineers found parts of the 2.5lb plunger spring in the north flame trench, which highlighted the force that can transport such debris. However, there was no evidence of it travelling towards the vehicle during launch.

Engineers will carry out a full investigation over the coming week, via the safety board and the all-power PRCB (Program Requirements Control Board), following the establishment of a fault tree established, which may recommend a redesign of the system ahead of STS-119 next year.

Other items of interest with the boosters – known as “squawks” were listed as “Suspect Sea Water Activated Release (SWAR) Failed to Release x4” – which has been seen on most recent flights, and is a known issue with no mission impact.

The others are listed as “foreign material” found on a hydraulics unit – again no issue, and “Auxiliary Power Unit (APU) Magnetic Pickup Unit (MPU) Electrical Connector Rotation,” which also has been closed as an item if IFA interest.

Endeavour and her SCA piggyback ride arrive in Louisiana, via JSC flyover