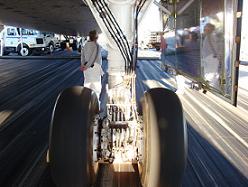 Engineers are working through post flight deservicing tasks on Endeavour at Dryden Flight Research Facility (DFRC)/Edwards Air Force Base, with opening engineering images and notes pointing towards an extremely clean vehicle, following Sunday’s landing in California. Images of Endeavour’s Window 6 “thermal pane” – which suffered from a MMOD strike on orbit – show the damage did not spread during re-entry.

Endeavour was towed to the Mate/Demate facility – which is used for deservicing the orbiter, and for lifting orbiters on to the back of the SCA (Shuttle Carrier Aircraft) – late on Sunday local time.

A couple of issues were noted with the opening procedures. notably with the process of transferring power from Endeavour’s Fuel Cells to ground power at the Mate/Demate facility. However, that was expected to be resolved without a timeline hit to S5022 operations.

The opening report on the condition of Endeavour has already been created, which backs up Mission Management Team (MMT) chair Leroy Cain’s praise for what he believes could may be the “cleanest” orbiter ever, due to the lack of any notable TPS (Thermal Protection System) damage.

Opening evaluations into the landing gear point to good performance during landing – despite the shorter runway Endeavour touched down on. 800 feet of runway still remained when the orbiter’s wheels stopped.

The runway report is the fourth milestone check of the orbiter’s TPS, following Flight Day 2 inspections via the OBSS (Orbiter Boom Sensor System), Flight Day 3’s RPM (Rbar Pitch Maneuver) images taken from the International Space Station (ISS), and Flight Day 15’s Late Inspections, which finally clear the orbiter for re-entry. The lack of damage is mainly thanks to the performance of Endeavour’s External Tank (ET-129). which suffered hardly any foam loss during ascent.

“Overall the vehicle looked very clean. No further degradation to the damages noted in RPM photos was observed,” noted the runway report on L2. “Approximately 5 tiles had damages greater than 1.0 inch

“One location of protruding Ames gap filler (as noted on orbit RPM images) was found. Ames was protruding approximately 0.5”. No noticeable local overtemp or change from the on-orbit photo.

In total, only about 10 areas – all matching the RPM photography – were listed in the runway report on TPS damage, which is extremely low compared to most flights. Only a handful of areas received some notes of interest, notable on the OMS (Orbital Manuvering System) Pods.

The main area of interest related to how Endeavour’s Window 6 (Pilot side) performed during the return, following the MMOD hit on orbit. While the damage was only to the first of the there panes each window has, thus was safe to re-enter with, extensive analysis was performed by engineers on the ground.

The worst case scenario related to the damage spreading, resulting in small fragments liberating from the window and potentially impacting the aft of the orbiter. 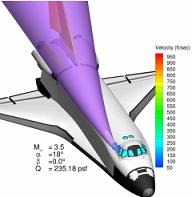 “Impacts are possible along upper surface from window to vertical tail. Maximum impact velocity on tail approximately 1100 ft/sec,” noted the Window 6 MMOD Debris Transport presentation on L2, published on FD13. “At higher Mach numbers and angles of attack impacts are limited to tail.”

This process of working to the worst case scenario is a regular feature of NASA’s safety regime, ensuring every possibility is understood, and that such situations have a factor of safety margin inbuilt.

This was still deemed as no threat to safety, due to the time on re-entry (late in the landing phase) this could have potentially occurred, and the small probability of the thermal pane cracking via the high pressures of re-entry.

As observed in several post landing photographs of the MMOD damage, the window did not crack, with only a small amount of thermal expansion of the damage around the hole caused by the MMOD.

“MMOD damage on Window 6 did not appear to propagate during reentry,” confirmed associated notes. The window will be replaced – as is normal – during post flight processing, when Endeavour returns to her Orbiter Processing Facility (OPF-2).

Endeavour will spend around five more days in California, before heading back to Florida on top of the SCA. A timeline and a flight path – which will involve several stopovers en route – is yet to be finalized, though the SCA/Endeavour pairing is expected to depart for the cross country trip on Sunday.

L2 members: All documentation – from which the above article has quoted snippets – is available in full in the related L2 sections, now over 4000 gbs in size.
STS-126. MMODTPS
1
FacebookTwitterPinterestEmail
previous article