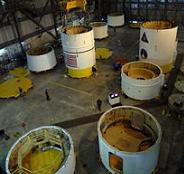 Endeavour has finally arrived back to the home comforts of her Orbiter Processing Facility (OPF-2), following her highly successful STS-126 mission. Meanwhile, the pace shows no sign in letting up, with Discovery now powered down for the final time, as she prepares to rollover to the Vehicle Assembly Building (VAB) early in January, ahead of February’s STS-119 mission.

Deservicing will continue on Endeavour, following her cross country ferry trip on top of the SCA (Shuttle Carrier Aircraft), as part of launch preparations for her next mission, STS-127.

The orbiter will undergo jacking and levelling for her stay inside the OPF, normally followed by the offloading of her cryogenics – however, most of the deservicing operations have been completed out at Dryden, following her Californian landing.

An extensive mapping of her Thermal Protection System (TPS) will be carried out over the next week or so, ahead of any required repairs. Thanks to the extremely clean flight of Endeavour, most of the orbiter’s heatshield will not require any extensive work. A Flow Control Valve troubleshooting plan will also be put in-work within the next few days.

STS-127 will complete assembly of the Kibo Laboratory complex, on a launch date tracking mid June, 09, for a 15 day mission with five baselined EVAs. Aside from installing the Japanese Experiment Module – Exposed Facility (JEM-EF), Endeavour’s crew will be tasked with replacing six batteries on the P6 truss.

That mission is part of a very busy 2009, which will hopefully complete five shuttle missions – intersected by the test launch of the Ares I-X launch vehicle, as previewed by shuttle manager John Shannon.

“If you like the space business, next summer is going to be amazing! We will have launches for STS-125/HST-SM4, STS-127/2JA and STS-128/17A within a three month period, and the Ares I-X launch will be somewhere in the middle of all of this,” noted Mr Shannon on the Shuttle Stand-up/Integration report on L2.

“Thanks again to everyone for all your hard work on STS-126. This was a tremendous job all the way around, with a very long and successful flight!”

First up in 2009 is the February 12th launch of Discovery on STS-119. Preparations have been proceeding to plan, with the Payload Bay Doors (PLBDs) closed for rollover – which will take place on January 7.

A major boost to the processing flow timeline for Discovery was the ahead of schedule shipping of a new RCC (Reinforced Carbon Carbon) panel (10R) from Lockheed Martin.

Due to the slight differences between the three orbiters in NASA’s fleet, simply swapping hardware between the vehicles is not always desirable, as was the case with Discovery’s replacement panel on her right wing.

Although a backup plan was available for using a donated panel from one of Discovery’s sisters, Lockheed engineers worked around the clock to fabricate a new RCC panel for Discovery, two months ahead of the projected early January delivery estimate. This replacement panel has now been installed, following fit checks.

“Final Orbiter OPF power down completed on Friday. Rollover to the VAB is still planned for 1/7/09,” noted the latest processing information on L2. “Aft structural leak test and orbiter compartment positive pressure test were completed. The main landing gear was lowered to be configured for final gear retract.

“Reaction Control System (RCS) Thruster L2D and L3D drying will pick up today and continue into next week. Crew module side hatch closure for rollover is scheduled for Monday.”

Over in the VAB’s High Bay 3 (HB3), Orbiter Mate Preps are in-work with the awaiting External Tank (ET-127) – which was originally set to fly with Atlantis on STS-125 – and the twin Solid Rocket Boosters (SRBs), known as Booster Integration set BI-135 and Reusable Solid Rocket Motor set RSRM-103.

The VAB is a busy place of late, with Ares I-X hardware taking shape in High Bay 4 (HB4). The test flight is currently scheduled for NET (No Earlier Than) July 11, 09.

“In HB-4, Upper Stage (US) processing continues. The forward skirt extension for Ares 1-X was received last week. The module is in the work stand and has been received and inspected. Work will begin soon,” noted the stand-up, with further details provided by processing reports.

“Ares I-X: US-7 mate to US-6 has not been torque yet, there is a gap that is out of tolerance. Personal are working it. IS-1 / IS-2 (Interstage) Deferred Work: DFI (Development Flight Instrumentation) Harness and Sensor Install and Hook-up in work.

“US-5 Alignment Pins for the mate, mated moved to today, fit checked and installed, go for mate.”

The launch date for Ares I-X will depend largely on the decision set to take place soon on whether Pad 39B – which Ares I-X requires – is still needed for STS-125’s rescue mission requirement, STS-400 LON (Launch On Need) with Endeavour.

Should a decision favor using Pad 39A for both STS-125 and STS-400 (pad to pad plan), the July launch date will become more favorable for Ares I-X, with modifications taking place on 39B almost immediately. Should 39B remain a requirement for STS-400, Ares I-X may be threatened with a delay to October, 09.

Also taking place in the VAB’s High Bay 2 (HB2), ET-130 – now the tank that will fly with Atlantis on STS-125’s mission to the Hubble Space Telescope – is being checked over in the aptly named Checkout Cell, following its recent arrival from the Michoud Assembly Facility (MAF).

All indications point to a very clean tank, following its shipping from New Orleans.

“ET-130 has been received and inspected. The tank is very clean,” noted processing information. “Processing and installation continues with the ground umbilical carrier plate.”

Processing timelines for STS-125’s current launch date of May 12, 09, are tracking rollover for Atlantis from OPF-1 on March 26, followed by rollout to Pad 39A on April 2. This was confirmed on the recent Delta (Delta) Launch Site Flow Review by shuttle managers.

“There were no issues with the STS-125 Delta (Delta) Launch Site Flow Review. The APU QD (Auxiliary Power Unit Quick Disconnect) heater mod is one of the mods being implemented on OV-104 (Atlantis) this flow,” noted MOD’s 8th Floor News on L2.

“R&R due to suspect diodes in FA1 and EIU2 is also being considered but not yet approved. Orbiter Rollout to the VAB is scheduled on 3/26 and rollout to the pad on 4/2.”

With the delay to STS-125, due to Hubble’s troubles, engineers have been taking the opportunity to fine tune certain elements of Atlantis’ hardware, including the ATVC (Ascent Thrust Vector Control) box, which had notable issues ahead of her previous mission, STS-122.

The space shuttle Ascent Thrust Vector Control (ATVC) portion of the flight control system directs the thrust of the three SSMEs and the two SRB nozzles to control attitude and trajectory during lift-off and ascent.

Other work taking place involves refined work on Atlantis’ TPS, following the inconvenience of being destacked from ET-127 post-mission delay.

The downstream manifest continues to remain fluid, with the milestone of the Shuttle Extension plan set to head to Congress in February. All indications point to a favourable plan to add at least two years to the shuttle manifest, which may include at least five new missions.