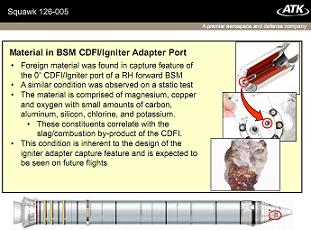 As NASA’s triumphant 2008 year comes to a close – a year that saw four Space Shuttle construction flights to the International Space Station (ISS) – engineers around the United States are working hard to ensure a safe and successful 2009, starting with the launch of Discovery’s STS-119 mission in February, via lessons learned from STS-126.

Among the items scrutinized after last month’s STS-126 mission were the twin Reusable Solid Rocket Motors (RSRM), with all information pointing to an In-Flight Anomaly (IFA) free flight for this critical vehicle component.

“All RSRM countdown parameters were within LCC/OMRS limits and within family,” notes the RSRM presentation, available for download on L2. “Performance of both RSRM motors and all ATK BSMs were within family and met all CEI limits.”

However, four squawks have been identified, two on each RSRM, including Scratches in the Dovetail Groove of the 270” OPT and Corrosion on Igniter Chamber of the Left Hand RSRM and Material in BSM CDFI/Igniter Adaptor Port and Abnormal Wash Erosion on Nozzle Nose Cap on the Right Hand RSRM.

The first LH RSRM squawk noted by the Program Requirements Control Board (PRCB) presentation relates to three scratches on the dovetail (secondary) O-ring groove of the 270-degree OPT.

“Scratches were in a diagonal orientation extending from the outboard groove bottom radius but did not cross the entire O-ring footprint area,” notes the presentation.

The scratches were found by using a 5-mil brass shim; however, engineers were unable to characterize the depth of the scratches or determine if raised pieces of metal were present during initial disassembly and inspections at Cape Canaveral.

The presentation goes on to say that the scratches were caused during the assembly of the LH RSRM and were no concern for flight.

The RSRM presentation states that a “review of process suggests that solvent used during cleaning in assembly may have been left behind when joint was mated leading to the corrosion.”

Previous tests by engineers reveal that “wet holes don’t affect bolt torque.” As a result, there is no expected, or observed, effect on RSRM performance. 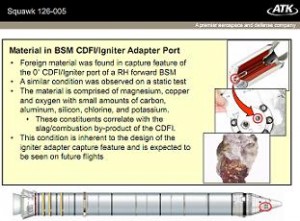 For the other RSRM, the first squawk noted by the PRCB for the RH SRB is material in the BSM CDFI/Igniter adapter port.

“Foreign material was found in capture feature of the 0” CDFI/Igniter port of a RH forward BSM,” notes the PRCB presentation.

Analysis of the material shows that it consists mainly of magnesium, copper and oxygen with small amounts of carbon, aluminum, silicon, chlorine, and potassium.

A similar substance has been observed previously on static test RSRM in Utah.

“These constituents correlate with the slag/combustion by-product of the CDFI,” notes the presentation.

According to the PRCB, the condition is inherent to the design of the igniter adapter capture feature. Furthermore, the presentation notes that this material build-up is expected on future flights.

The final squawk, and the only one that may be elevated to an IFA after further analysis, is abnormal wash erosion on the nozzle nose cap.

“Abnormal wash erosion was observed on the OD surface of the RH Nose Cap.”

This type of erosion has been seen on previous flights and static tests. A further investigation of this issue will be conducted in Utah during the nozzle disassembly process which will begin after the start of the new year.