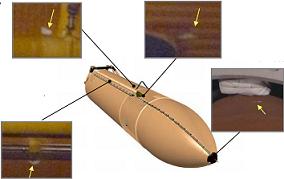 Four missions, four clean tanks – that’s what the 2008 report card notes for the Michoud Assembly Facility (MAF), with the last mission of the year – STS-126 with ET-129 – proving to be the best performing tank since Return To Flight (RTF).

Ever since the tragedy of STS-107, the main focus on shuttle safety has been concentrated on reducing foam and ice liberation from the External Tanks, primarily during first stage – and early second stage – ascent.

2008 has marked a breakthrough year for MAF, with tank performance improving mission on mission, thanks to a variety of mitigation techniques that have been implemented at the New Orleans facility.

Most of those engineering changes to the TPS (Thermal Protection System) foam has been centred around the removal of as much foam as possible from the tank in areas that could liberate and strike the vehicle – most notably from the Ice/Frost Ramps that run down the side of the tanks.

With the post ET separation photography confirming the least amount of lost TPS on post RTF record, only three minor areas of TPS loss – backed up by an extremely clean orbiter, with no notable TPS damage suffered by Endeavour – ET confidence has been added ahead of the Flight Readiness Review (FRR) season for STS-119.

All areas of foam loss are understood, and relate to either cryopumping during ascent – a known condition, or small areas of manufacturing damage suffered due to “high traffic” of engineers working in certain areas of the tank.

Each area of interest gained expansive notes and data in the IFA presentation, before being closed as “known conditions”.

The tanks will always lose a certain amount of foam during ascent, and – as per former shuttle manager Wayne Hale’s comments on one of his many ET presentations – foam loss will never be zero.

However, with a few minor areas of additional modification due to be implemented on downstream tanks, the threat to orbiter safety has been – and will continue to be – greatly reduced, thanks to the fine efforts of the ET engineering community.

Bryant added that MMT (Mission Management Team) chair LeRoy Cain, said of ET-129 “This is just flat (out) amazing,” when given the overview of the tank’s performance.

“LeRoy asked me to give kudos to our workforce; he was that pleased with the tank’s performance, (and) hence the condition of the Orbiter.”

Bryant also added that in a post-launch performance review one week after lift=off, observers noted that the ET electrical and propulsion systems performed as expected pre-launch and post-launch. The structural and Thermal Protection Systems also performed nominally post-launch.

STS-126 was Bryant’s debut launch as ET manager, which is one of the longest shifts on L-1, due to the early tanking of the ET and the obvious need to monitor the performance of the ECO (Engine Cut Off) sensors during that procedure.

Despite this, Mr Bryant noted he wasn’t nervous – thanks to assistance from Lockheed Martin’s highly regarded ET head Wanda Sigur and Chief Engineer Jeff Pilet – as the countdown proceeded down to the T-9 minute poll. 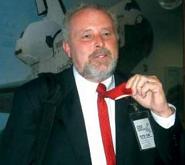 “Wanda checked in with me often, and actually I wasn’t that nervous. You’ve trained for this. You have great people around you doing their jobs,” he added. “Chief Engineer Jeff Pilet was, as usual, on top of things and kept me apprised of the tank’s condition and the Launch Support team. The Mission Support Room and Huntsville Operations Support Center were also on their game.

“When MMT Chairman LeRoy Cain conducted the roll call before coming out of the 9-minute hold, he called us first and I was able to confidently say, ‘Lockheed Martin (ET) is GO for launch.'”

As per NASA tradition a tie cutting ceremony was performed for Bryant’s first successful launch in his new position.

Other MAF challenges during 2008 related to being able to ship the tanks to Florida in time to support the manifest. At one point, several tanks were over a month down on their required shipping dates, before MAF managers utilized the results of several Technical Interchange Meetings (TIMs), along with additional shifts for the workforce.

Before the delay to STS-125, all the tanks were back on schedule. And while the 2008 manifest remains fluid, 2009 has been relieved of all schedule concerns thanks to the hard work of the past 12 months.

Two tanks are currently in residence at the Kennedy Space Center (KSC) – ET-127, previously set to fly with STS-125, but now flying with Discovery on February’s STS-119 mission, and ET-130 – which recently arrived to take the place as the Hubble Servicing Mission ET, should STS-125 remain on target for a May, 2009 launch.

At MAF, five tanks are undergoing major production, which reaches into the 2010 shuttle schedule. All these tanks are either on or ahead of schedule, which is the first time a set of downstream tanks have had their shipping date pressure removed from the equation since RTF. 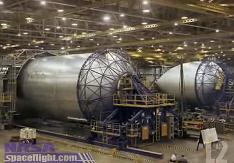 “ET-131 (STS-127): The ET is in final assembly flow, with all operations proceeding nominally,” noted the Lockheed Martin/MAF status on ET production, on L2. “Will probably work only a couple of days during holiday outage. Still checking the February 22 date for delivery of tank.

“ET-132 (STS-128): The ET is in final assembly flow, with all operations proceeding nominally. Tank was laid down out of Cell A. Has been moved into Final Assembly 3; allows them to get into some dual tank flow.

“ET-135 (Currently STS-131) LOX tank was moved into Cell K. After cleaning, exterior of tank has been primed. Doing inspections on that priming now.

“ET-136 (Currently STS-132): Hydrogen tank moved out for proof testing. This will take about five to seven days, and then it will move into post-proof inspections (now completed).”

In a few months time, MAF expect to know the outcome of the Shuttle Extension status, which currently calls for at least five additional External Tanks to be built.

As part of the assessment, MAF managers have worked their funding requirements and floorspace plan, the latter relating to required handover of space to the Constellation program. Their results are understood to be favorable in support of an extension.