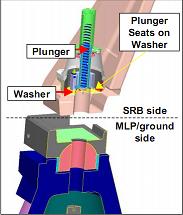 Engineers will meet in the middle of January to push forward with a redesign of the Holddown Post (HDP) Debris Containment System (DCS), in time for the launch of STS-119 – following an investigation into a debris incident during STS-126’s launch.

Four holddown posts (studs) surround each booster, with each stud 28 inches long and 3.5 inches in diameter.

The stud has a frangible nut at the top end, which contains two NASA Standard Detonators (NSD), which are fired at the time of SRB ignition, breaking the nut and releasing the connection between the vehicle and the post.

Debris from that release is captured in the DCS, which avoids the debris potentially impacting the vehicle.

However, the DCS suffered a failure during STS-126’s launch, where the post’s plunger, spring and blast container debris liberated, which is unacceptable due to the risk such an event has for the vehicle.

Photography of the liberated debris included a large spring from the holddown post, which was found by engineers in the north flame trench at Pad 39A.

“Initial postflight inspection of MLP hardware and blast container hardware complete for HDP #3: No anomalies with aft skirt holddown post bore location. No evidence of stud hangup,” summarized the findings by ground teams that arrived for inspection of Pad 39A.

While on-going work is taking place as to what level of debris threats such liberations may have on the vehicle, engineers have already put forward a redesign option, which is expected to be taken in time for the modification to debut on STS-119’s boosters. 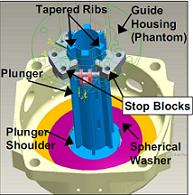 These stainless steel stop blocks will replace the current anti-rotation device, which would result in the plunger travelling half an inch in into washer bore, if stop block engages due to total plunger failure.

Successful pull tests have already been carried out on the stop blocks, although this is part of an ongoing test plan that will confirm design certification and allow for implementation on STS-119’s boosters.

The effort of testing and certification is all heading towards two decision dates in January – the first relating to an engineering summit on moving forward with the design for STS-119, and the need date relating to the implementation deadline on STS-119’s stack at the pad.

“It will be discussed at SSP PRCB (Space Shuttle Program, Program Requirements Control Board). The final decision will be made January 13 as to how STS-119 stack will be handled.”

“Recommendation: Proceed with design and certification as proposed for DCS stop block modification.” 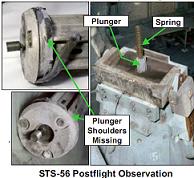 Such incidents with the holddown posts are rare, with the only previous recorded anomaly that mirrors the STS-126 event occurring back in 1993 with STS-56.

Stud hang ups on the holddown posts was the other issue that was recently addressed, which resulted in the debuting of a modification on STS-126 – initially set to debut on STS-125, before the Hubble mission slipped to May, 2009. It is not referenced as a potential cause of the anomaly with the DCS.