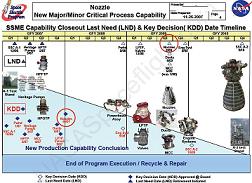 Constellation engineers are carrying out an evaluation process into a potential option of going back to the SSME (Space Shuttle Main Engine) on the Ares V first stage, which in turn would allow a return to a five segment Solid Rocket Boosters on the giant vehicle.

The program has initiated a study to look at the feasibility of maintaining the SSME after shuttle retirement, for potential use with Constellation, in turn allowing a move that would also hold benefits for spares support requirements in the event of a shuttle extension.

Currently, the Ares V baseline is a 10m core stage with six RS-68B engines and 5.5 segment solid boosters derived from Ares I. The upper stage is 10m in diameter with a single J2-X engine. However, the program is looking for additional margin on lunar exploration missions, and to trim the budget at the same time. This effort resulted in numerous studies to refine the Ares V vehicle.

The original 2005 ESAS (Exploration Systems Architecture Study) Cargo Launch Vehicle (CaLV or Ares V) was an 8.4m core with five expendable SSME’s, two 5 segment SRBs, and two J2-S engines on the upper stage. This originally mirrored a more powerful version of what was known as the “Magnum” vehicle in the July 2005 AIAA Joint Propulsion Conference Document.

The CaLV was to share the SSME with the Crew Launch Vehicle (CLV or Ares I), which would use it as its upper stage power plant.

After the expendable SSME was found to be too difficult to airstart on the CLV upper stage, and also too expensive to be used on the CaLV core stage, Constellation adopted a single J2-X for both upper stages, with Ares V utilizing the RS-68 on a 10m core (a more powerful “Longfellow” type vehicle).

Constellation is now interested in re-evaluating the SSME option for the Ares V core, with five or six expendable SSMEs, and two 5 segment SRB’s powering the new variant, should the option be selected.

The switch back to the $50-$60 million per engine SSME would be traded against the development costs of the 5.5 segment booster and modification of the $20 million RS-68B for Ares V.

A documented reference to the SSME potentially living on post-shuttle was recently revealed via a note of pre-emption on a shuttle memo in December, which initially did not give clarification on its potential requirement, until sources passed on clarification of its Ares V relevance.

“A study on retaining flight ready block II engines/LRUs (Line Replaceable Unit) and the flight capability after Shuttle retirement was discussed,” noted the memo on L2. “This preserves the option of using SSME assets as risk mitigation for Cx (Constellation) and other NASA or external flight and test applications. This presentation identified the items that would need to be retained.

“A potential location for storage is the engine processing facility which is attached to OPF-3 (Orbiter Processing Facility) but OPF-3 is later scheduled for demolition. SSME and Ground Ops need to study this in further detail. The PRCB (Program Requirements Control Board) agreed the study should be pursued.”

Should shuttle receive an additional two years worth of flights – which is deemed as the favored option – one additional SSME will be built and added to the current manifest of engines.

The additional requirements will be based on spares supports, with the shutdown of SSME contractor assets now frozen until a decision on the retirement date is finalized, as required in the recent Senate Bill that included the protection of shuttle extension. Plans to shutdown the key hardware elements of the SSME had been ongoing up to that point.

Notably, an expanded production capability would be required to support the number of SSME’s that would be needed for Constellation, should the option be taken. Past studies have estimated the cost of building a new production line at roughly $500 million.

When the engine has been looked at in the past for expendable use, it has been estimated that the complexity of the engine can be reduced by eliminating the reuse requirement. This would drive down costs by reducing the number of parts, simplifying the manufacturing, and eliminating the labor required per engine for post flight servicing. All of this will factor in to the decision to go with RS-68B and 5.5 segment SRB or SSME and 5 seg SRB.

With the potential shuttle extension, the SSME will be used by the shuttle far longer than originally anticipated. The infrastructure to support the SSME is already in place at KSC, and the personnel are already trained and equipped to handle the SSME.

With the potential for a shorter gap between the decommissioning of the shuttle and the first tests of Ares V it may be possible to retain the capability to fly the SSME, which is an option that was previously not on the table.

Another major factor that the study is likely to consider is that the SSME may be better suited to mitigating the plume impingement and base heating issues on Ares V, which is currently a major issue that is being worked on Ares V.

The exhaust plumes of six RS-68 engines, combined with the two SRBs, interact to reduce the efficiency of the engines, and cause extreme heating on the base of the core stage. 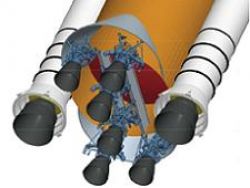 This has led to an ongoing evaluation into the realignment of engine placement on the base of the Ares V, with several options still being studied.

The regenerative nozzle of the SSME may have an advantage over the ablative RS-68 by providing a more resistant nozzle in the extreme environment of the core stage cluster.

The regenerative nozzle protects both the inside and the outside of the nozzle, versus the ablative nozzle which is designed to deal with heat from only the inside. In a cluster of engines, the nozzle must withstand both the heat from its own exhaust in addition to the outside exhaust plumes of the other engines in the cluster.

Because of the regenerative nozzle, the SSME may be more resilient to plume interaction and base heating in this area.

Although a change back to the SSME is not believed to be imminent, the study into a potential switch will likely be completed by early 2009.

At that time, Constellation program engineers will know if the shuttle manifest has been extended past 2010, and if the plume impingement issue with the RS-68s is still a troublesome factor – all of which will play into the hands of favoring a lifeline to the workhorse engine that has proved to be a huge success over the 25 years-plus use on the space shuttle.

L2 members: All documentation – from which the above article has quoted snippets – is available in full in the related L2 sections, now over 4000 gbs in size, which includes the world’s largest collection of  unrestricted Constellation documentation and video outside of NASA computers.