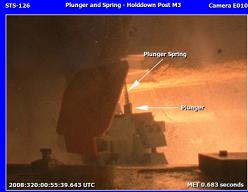 Among the various reviews conducted, the PRCB heard reports from the Kennedy Space Center (KSC) on countdown and post-launch anomalies, as well as presentations from Systems Engineering & Integration (SE&I) and Pratt and Whitney Rocketdyne on Endeavour’s performance during ascent.

As part of the complete pre-launch and post-launch activities at KSC, a total of 42 items met the criteria for classification as In-Flight Anomalies (IFAs) for STS-126. Of these 42 items, only two were presented in-depth to the PRCB, the Orbiter Access Arm (OAA) White Room side hatch clearance door issue and the LOX (Liquid Oxygen) Tail Service Mast (TSM) door issue.

As noted by the KSC IFA presentation, available for download on L2, “During launch countdown the Orbiter Access Arm White Room side hatch clearance door was left unsecured.”

While the Launch Team was able to determine that a handrail inside the White Room would prevent the door from contacting Endeavour in the event that the OAA had to be extended back into place near Endeavour’s side hatch later in the countdown, “White Room safety railing on the door was found bent post launch.”

As always, an extensive review was conducted in order to identify areas of improvement for White Room closeout procedures.

“Several areas for improvement identified and will be incorporated for STS-119 including reorganizing the S0007 procedure into sequential steps centered on work areas,” notes the KSC IFA review.

Other areas for improvement include real time use of buy copy of White Room securing paper, providing additional time for a final closeout walk down of the White Room, and emphasizing the responsibilities of each Closeout Crew member as part of a check and balance system.

The second KSC IFA presented to the PRCB related to the LOX TSM door on the Mobile Launch Platform (MLP). Engineering cameras on the MLP captured the service door swinging open at T+4.5 seconds.

The presentation states that “During post launch inspections the door roller chain sprocket was found misaligned and loose and the upper hinge was found bent due to plume impingement.”

As such, two forward actions have been assigned to improve door latching procedures for STS-119 in February. The first procedural change relates to the call out of the tool being used to close the door.

Additionally, “Enhance procedure to call out specific number of revolutions of tool to ensure that door dogs are properly engaged,” notes the KSC presentation.

Moreover, the KSC IFA presentation lists the remaining 40 items identified during the post-launch walk down of the launch pad. Among the items noted include a wooden bristle brush found underneath the west flame deflector and several large pieces of rust found on various levels of the Fixed Service Structure.

Also noted in the KSC IFA presentation were 12 Ground Support Equipment (GSE) IFAs. Of these, three require forward action prior to STS-119.

During post-launch evaluations, the RF verification failure was traced to a MILA (Merritt Island Launch Annex) reconfiguration issue. Enhanced KSC procedures will be adopted prior to STS-119 to ensure that this problem does not reoccur.

The third and final GSE item requiring action before STS-119 is the Inertial Reference Alignment Management System (IRAMS) software. During the STS-126 countdown, the IRAMS software did not perform after GMT clock rollover to the following day. “Software sensitivity between application and SDC during GMT rollover has been identified and will be corrected before STS-119,” adds the IFA review document.

In addition to the KSC IFA presentation, the PRCB also heard presentations regarding Endeavour’s ascent from Systems Engineering and Integration (SE&I) and from Pratt & Whitney Rocketdyne, the company in charge of maintaining the SSMEs.

The failure has been traced to an unrelated change in the OI-33 software which debuted on Endeavour/STS-126. The failure to send GCIL commands resulted in an “inadvertent data shift affecting Payload Signal Processor port moding… and Ku automatic handover commanding,” notes the presentation.

Despite the fact that this failure was not a problem for Endeavour and her crew, SE&I made a point of mentioning in their IFA presentation that certain flight software generic problems have the ability to cause loss of command and control of the vehicle.

In addition to this IFA, two issues with the Solid Rocket Booster (SRB) Hold Down Posts (HDPs) were discussed by the PRCB at the IFA review meeting.

The first issue relates to the presence of multiple pieces of debris shortly after the detonation of the NASA Standard Initiators (NSI) on the SRB hold down bolts.

“Debris ejected from the area of the Debris Containment System (DCS) of HDPs #1,2,5,6,&7 during NSI firing,” the PRCB presentation notes.

The second HDP issue discussed in the presentation is the DCS on HDP#3 for the SRB aft skirt.

“Hold Down Post M3 plunger and spring extended through DCS bore hole during liftoff,” notes the IFA presentation. “Plunger and spring released from SRB aft skirt and remained on the ground.”

These two types of debris are not covered by the current risk assessment baseline. As such, they are presently classed as potential ascent debris risks to the Space Shuttle; however, assessments are underway to determine if this debris source does indeed represent a debris threat to the Space Shuttle during the first few seconds of liftoff.

Also of note for SE&I was the ice debris liberation from the area around Endeavour’s LH2 (Liquid Hydrogen) T-0 umbilical plate 26.6 seconds after liftoff. 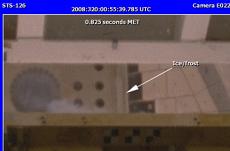 “Ice was observed to liberate from the (left hand) side of the Orbiter aft fuselage TPS (Thermal Protection System) at T+27 seconds,” notes the SE&I presentation. “Imagery taken inside the LH2 TSM after T-0 but prior to bonnet closure indicated ice on the Orbiter TPS between the Orbiter LH2 T-0 Carrier Plate and the (left hand) OMS Pod.”

Ice buildup has not been observed in this area of the vehicle before, nor was it expected by the Orbiter Project Office (OPO). Furthermore, this area is not visible by ground cameras prior to liftoff.

As such, ice buildup and liberation from this area of the vehicle is not currently accounted for in the risk assessment for launch debris.

Finally, the last items presented to the PRCB by SE&I were the anomalies of the Main Propulsion System (MPS).

During the 2nd stage of ascent – after SRB separation – a gaseous hydrogen pressure Flow Control Valve (FCV) opened without being commanded to do so.

While the anomaly did not have an impact on ascent performance, simply resulting in an improper MPS configuration during SSME operation, it is a constraint to STS-119 as engineers will have to determine whether the anomaly was the result of the FCV itself, or, more seriously, the result of a fault with Endeavour’s wiring.

As noted by the extensive IFA review, any failure of the GH2 FCV is a 1R/2 condition. Now that Endeavour is back in her Orbiter Processing Facility a radio graphical analysis, as well as x-ray and visual analyses, will be performed prior to SSME removal to try to isolate the problem to either the FCV or Endeavour’s wiring.

Additionally, the Mission Evaluation Room (MER) identified two further MPS issues during Endeavour’s flight that are still under evaluation and, as of now, not classed as part of the Integrated IFA list.

These two issues include an unexpected helium pneumatic pressure decay and the loss of a “closed” indication from LH2 pre-valve valve#1.

“During ascent, MPS helium pneumatic bottle (drives MPS valves) had pressure decay of 140psi,” notes the presentation. “This is greater than expected thermal effects of 20-60psi.”

The pressure readings stabilized after Endeavour was transitioned for on-orbit operations and the decay was later traced to a leak in the internal helium system.

Additionally, the LH2 pre-valve issue relates to the loss of the “closed” indication on valve#1. “Shortly after Main Engine Cutoff, closed indication for the center hydrogen pre-valve was lost. Should have shown closed.”

Nevertheless, the valve does appear to have functioned properly and the anomaly did not impact that remainder of Endeavour’s mission.

All the same, all three of Endeavour’s SSMEs functioned properly, with Pratt & Whitney Rocketdyne reported no IFAs.

“All SSME observations are encompassed by previous flight and/or test experience and identified as no impact,” notes the SSME presentation available for download on L2.

Additionally, all three engines performed as predicted with the modified Control Mixture Ratio (CMR) of 6.048mru. The previous CMR had been 6.032mru.

A fleet-wide mitigation plan for the decreasing OBMR will debut on STS-119 next year.