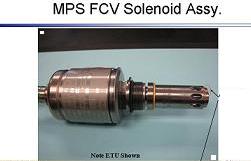 Shuttle Discovery has completed her three mile journey from the Vehicle Assembly Building (VAB) to Pad 39A, as preparations for STS-119 start to ramp up for the February 12 launch target – which includes the building of flight rationale for the three replacement Flow Control Valves (FCVs) that will be installed into Discovery.

Discovery departed from the VAB at 5:17am for the trip on top of the transporter crawler and Mobile Launch Platform (MLP), in what proved to be a visually stunning rollout, as dawn broke over the Florida coastline.

The trip – which began following the clearance of a few minor issues – was troublefree, arriving at Pad 39A around midday.

Engineers were already busy preparing for the arrival of Discovery, with Pad Validation work picking up, along with waves of LOX tankers arriving to support the launch – targeted for less than a month’s time.

“Pad 39A: LOX replenishment was completed yesterday with 4 waves of tankers.”

Also starting this week is the opening Flight Readiness Review (FRR) – one of several stages – to confirm the shuttle and her teams at the Kennedy Space Center (KSC) and Johnson Space Center (JSC) are ready to support the February 12 launch date.

“Great start to the New Year – with Discovery is now mated to the stack – and rollout to Pad A,” noted the latest MOD level 8th Floor News report on L2.

“The FRR process is in full swing with the MOD FRR on 1/16 and many of the other SSP Elements and Organizations conducting their internal FRRs in the next few weeks leading up to the SSP Level II FRR on 1/21 and 1/22, JSC Center Director Pre-FRR on 1/30, and Agency Level I FRR on 2/3.”

One of the main items that will be discussed at the FRRs is the issue found on Endeavour during the previous missions (STS-126) – relating to the Flow Control Valves (FCVs), which was previously reported by this site. Engineers will replace Discovery’s three FCVs at the pad, with flight rationale being worked on by engineers at JSC.

“Good progress is being made by the folks working the STS-126 MPS (Main Propulsion System) Flow Control Valve anomaly,” added the 8th Floor report. “The valves from Atlantis/OV104 and Endeavor/OV105 (including the anomalous valve with cracked poppet) and three spare valves have been inspected.

“The results indicate the failure was caused by high cycle fatigue. However, this poppet is not subjected to high number of cycles. Therefore, the team is trying to determine the source of the high cycle fatigue – potentially environment induced or induced during the manufacturing process.

“The community continues to work this issue and are working toward having acceptable flight rationale for STS-119/15A.”

It is expected that Discovery/119 will receive the required flight rationale at the FRRs, due to the extensive checks that have taken place on the three FCVs that will be installed into Discovery at the Pad.

The other challenge is to ensure another valves are deemed to be in pristine condition for installation into Endeavour – given she will be supporting Discovery as the LON (Launch On Need) orbiter. 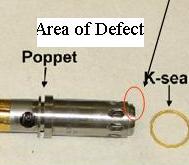 “Internal pneumatic leak seen on STS-126 has been isolated to check-valve #4 More testing will be performed. After valve is removed, it will undergo failure analysis,” added JSC’s Orbiter department on the latest Shuttle Stand-up/Integration report on L2.

“All poppets on the spare valves have been scanned by electron microscope after dye penetrant was applied.

“Results show all three spares good, with no cracks. Equipment is back with vendor to be reassembled.

“This Wednesday is OPO (Orbiter Project Office) level Pre-FRR for STS-119. During that meeting, the flight rationale for the FCV will be discussed.”