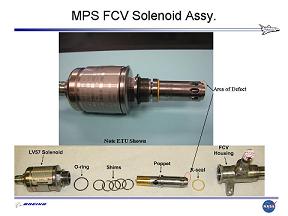 The giant S6 integrated truss segment is set to be installed into Discovery’s payload bay over the weekend, as the shuttle continues to press through the opening stages of the S0009 pad flow. Meanwhile, the Flow Control Valve (FCV) issue has been classed as the only constraint to launch, as engineers work through flight rationale ahead of STS-119’s February 12 launch target.

Discovery is enjoying a relatively smooth flow, with only the weather threatening to push processing off the current timeline. Contingency time is built into the schedule, should it be required.

“S0009 continues well along the scheduled timeline, however due to some weather concerns, parts of the procedure may slip into the weekend,” noted processing information on L2. “Some milestones completed yesterday include: LO2 and LH2 pad to MLP (Mobile Launch Platform) mates and leak checks, LO2 and LH2 vent valve actuation test and hard wire checkouts, ET/IT and nose cone GN2 purge tests.”

Processing will continue to press ahead over the weekend, highlighted by the payload’s transition from the PCR (Payload Checkout Room) to the Payload Bay of Discovery.

“Engine FRT (Flight Readiness Test), aerosurface FRT, ball seal leak checks, and He signature testing is in work and will continue into the weekend,” added processing information. “Configured to install the payload; will be doing that this Saturday and Sunday.

“Over the weekend, will be installing the blank off plates. That will get us configured to remove Flow Control Valves (FCV) this coming Monday. Preparations for the TCDT (Terminal Countdown Demonstration Test) CTS (Call To Stations) scheduled for Tuesday.”

The latest processing issue was a concern relating to the SSME (Space Shuttle Main Engine) controllers, which – it was feared – were exposed to damaging X-rays, which were being taken as part of the FCV investigation.

“SSME (Pratt & Whitney Rocketdyne/KSC): There were some X-rays being taken of GH2 lines for FCV investigation. Learned they did not follow proper procedure to cover SSME controllers with lead blankets they normally use,” added the latest Shuttle Stand-up/Integration report on L2. “As a result, have submitted request to power up SSME controllers this morning for some troubleshooting.

“First thing want to do is a memory dump to see if memory is altered at all. Getting with Honeywell to see if are any other special tests or commands they could issue to controllers to make sure they were not injured by X-ray. This will all be documented on a PR (Problem Report).”

Those retests have since been carried out, with good results – thus clearing the concern the X-rays did impact on the engine controllers.

“X-rays performed in the aft which may have been done without adequate shielding protection for SSME Main Engine Controllers (SSMEC) Problem: Troubleshooting was performed to aid in the verification of the integrity of the SSMECs by comparing the EEPROM dumps with the compare tapes,” added processing notes. “Analysis showed no errors.”

On the FCV issue itself, work is proceeding towards the removal of Discovery’s three valves, ahead of their replacement with three spares, which suffered an incident via cleaning, though not deemed serious. This continues to be the number one item as managers move into the Flight Readiness Reviews (FRRs).

“On the FCVs, will work closely with (fabricator) Vacco as they resolve the staining after the dye penetrant and cleaning,” noted United Space Alliance (USA) Logistics. “Have a January 31 drop dead date from Ground Ops to support mission.

“Will work with Vacco to see if can authorize premium overtime or whatever can do to get back on track to support date. Are probably yellow now on delivery.”

The need for overtime to get the spares delivered to KSC on time is due to the noted incident with the cleaning of the valves, which has slowed down the timeline.

“Orbiter is slowing down on delivery of assets to KSC to install for STS-119 because of an incident that happened when cleaning dye penetrants from the poppets. Deionized water was used,” added the stand-up. “This material is somewhat sensitive to oxidation, and the deionized water has to be dried off.

“That process was not performed as it should have been, so there are some stains on the poppets, with the worst stains on the three spares they want to fly on STS-119. Believe have cleaning technique that will remove a small amount of material from poppet, but will be acceptable from a flow balance standpoint. Will do this over next couple of days.”

The main focus is on ensuring there is flight rationale with the spare valves, following the STS-126 incident, that does not rule out a problem that is risked on all such valves. Part of that flight rationale requires engineers to evaluate what could be the worst case scenario during ascent.

Those risks, one which is understood to be a LOV/C event (Loss Of Vehicle and Crew), need to be weighed against probability – which would be very low, as is the case the numerous LOV/C events a shuttle risks during ascent.

“Been looking at failure modes and scenarios, and when could get into trouble with possible venting on tank,” added the JSC’s Orbiter department. “Most scenarios would require two failures, but some could cause problems. More work is to be done.

“Also is work going on to understand if are environments present that can give high cycle count needed for the high cycle fatigue. Investigation indicates did have a high cycle heat failure. Team is scrubbing environment and doing some CFD modeling.

“Have been working on a technique called OJAY that allows them to look at oxide deposits on the fracture face. Have preliminary indication on the four different fracture surfaces (happened as crack progressed) of different amounts of oxide on each surface. This might suggest the fractures took place over more than one flight, progressing over time.

“There are some potential problems with this technique, so have many experts looking over the data again. If they could show that this was the case, it would help give some rationale for flight. Flight rationale will be built on risk acceptance of a low failure rate, and for most failure modes, we can tolerate the results.

“Looked at spare poppets and say they look as good as new and are good to fly.”

JSC’s Orbiter Project department are also involved, and held the Orbiter Project Office (OPO) FRR ahead of the main FRRs, classing the FCV issue as the one constraint to flight at present, due to the potential of a Critical One failure during ascent.

“With the two process escapes this week, have told team to slow down. OPO FRR have one constraint for flight, FCVs. This story will continue to evolve as we get closer to flight.

“Had great support from MSFC (Marshall Space Flight Center) on understanding acoustic environment. Have the experts that work knife edge seal to see if this is an acoustic environment phenomenon. On flammability issue, everyone considers venting to be a Crit 1 failure mode.”

The topic will receive its biggest review at the SSP (Space Shuttle Program) FRR next week, which is held over two days, before heading to the Agency level FRR the following week – which sets the launch date. By then, managers have a better understanding on the schedule timeline, which will hopefully of concluded the replacement of the valves on Discovery.