NASA’s Program Requirements Control Board (PRCB) has revealed that the Computed Tomography (CT) system, located at the Santa Susana Field Lab (SSFL) in Canoga Park, CA – the largest CT system in the US – will be shutdown, pending the shuttle extension decision.

Use of the facility, based on a 2010 retirement of the shuttle fleet, has already ended for the NASA-owned, Boeing-operated facility, that is maintained on Boeing-owned Area IV of the SSLF, which was once a prolific rocket and nuclear reactor test facility.

“Acquisition for the CT capability was made in 1989. CT system is the largest in the United States. No equivalent system is available within US,” overviewed the mid-December PRCB presentation on L2. “Major upgrades to the CT system were completed in 2006.”

The Californian facility also played a historic role in the testing and development of the Saturn V’s F1 first stage, and J-2 liquid oxygen/hydrogen upper stage, engines for Rocketdyne, as part of a rich rocketry history that ranges back to military ballistic missiles not long after World War II.

However, the facility is more infamously known as the site of the US’ first commercial nuclear-power producing reactor, as part of the Sodium Reactor Experiment (SRE), which came online in April 1957, before the first meltdown of a power-producing reactor in the US on July 13, 1959, ended its nuclear role.

The CT system at the facility has played an important role in recent shuttle related investigations, with such systems used on the ECO (Engine Cut Off) sensor issues ahead of STS-122 – which focused on the connections on the LH2 feedthrough connector, leading to a solution that has proven to be resounding success. 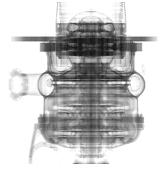 “CT system provides the capability to non-intrusively investigate a part or component up to 108” diameter,” added the presentation.

“Provides accurate, high-resolution 3-D representations of the part or component.”

It was most recently used on the ongoing RCC (Reinforced Carbon Carbon) panel investigation, after a Tiger Team was established to determine the circumstances behind an issue where the RCC’s Silicon Carbide (SiC) coating can flake away, and to find out what methods should be used to test the panels and how to go about getting replacement panels for future missions.

The focus of Tiger Team is based upon concern about a loss of critical SiC coating, which could result in the loss of crew and vehicle. To reduce the risk, the Space Shuttle Program (SSP) inspects, removes and replaces panels with a line scan magnitude (Wf) of 0.2. That criteria has resulted in 10 panels being removed from the fleet.

The involvement of the CT facility in the investigation ended back in September, marking the end of the system’s use on the shuttle program.

“The CT system was most currently utilized by the Orbiter Project to investigate RCC panels. These activities were completed 9/30/2008. NASA has utilized the CT system in support of the International Space Station (ISS) and Space Shuttle Program (SSP),” added the presentation.

“Examples of how the CT system has been used: Gimbals. High and Low Pressure Oxidizer Turbo Pump (HPOTP/LPOTP) Components and High Pressure Fuel Turbo Pumps (HPFTP) Components on the Space Shuttle Main Engines, and the Orbital Maneuvering System (OMS). Orbiter use of the CT System ended 9/30/2008.”

Efforts appear to have taken place on finding other customers for the CT facility, without success, which has led to the decision to place it through the Transition and Retirement route, which will result in its disposal.

However, the presentation ends with a possible stay of execution for the facility, based on the upcoming decision on extending the shuttle program by up to five years – though two years is more likely.

“Impact of the SSP Extension Study has not been accounted for (though) no funding is currently available to support this effort.”

However, it is unclear if an extension of the shuttle would still require the facility to be in a ready state, as is the case with a number of other specialized facilities. Other facilities – such as part of the Arc Jet facility in Houston – are going through special funding reviews for their roles during the transition to the Constellation program.

The Arc Jet facilities won’t be shut down due to their key role in TPS (Thermal Protection System) testing, which will be required for Orion’s heatshield development – which has already begun, and will continue during the transition.

The main focus on protecting assets in the event of a shuttle extension remain focused on hardware and spares, mainly at contractor facilities such as the Michoud Assembly Facility (MAF) in New Orleans.