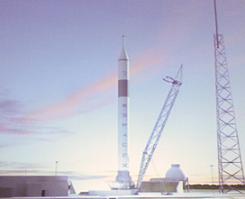 SpaceX chief Elon Musk has spoke of his desire to make Falcon 9 the first fully reusable launch vehicle, which he would “love” to include a flyback first stage. Musk also noted he is aiming for Falcon 9 to launch in under 60 minutes from the moment they leave their hangers.

Musk was speaking to an audience at the AIAA Aerospace Sciences Meeting a few days ago, in a speech entitled “The Future of Space Launch: Where We’re Going and How to Get There.”

SpaceX is coming off the back of an encouraging conclusion to 2008, with the successful Flight 4 of their Falcon I launch vehicle, and progress towards the 2009 flight of their Falcon 9 launch vehicle. Space X also won 46 percent of NASA’s $.3.5 billion dollar Commercial Resupply Services (CRS) contract.

“2008 was a pretty busy year for SpaceX,” said Musk, using videos and slides ahead of a Q&A session. “We finally got into orbit and we’ve completed most of our development of our Falcon 9 schedule – which to give you a comparison; Falcon I can carry half a ton payload to orbit and Falcon 9 can carry 11 tons. It’s a pretty big step up in scale.”

The Falcon 9 vehicle will make its debut launch from Cape Canaveral, lifting off from a pad that was formerly used for the Titan 4 launch vehicles. Although it will take a number of flights, Musk has a goal of being able to roll out the F9, erect at the pad, tank, complete checkouts of the vehicle and launch in under 60 minutes. (Image left: SpaceX Falcon 9 Manned)

“The Falcon 9 tanks are all friction stir weld – and the F9 is largest fully friction stir welded structure in the world. The 180 feet long vehicle is assembled horizontally and the rolls out to the pad to be placed vertical for launch,” he noted.

“One of the goals I have for the Falcon 9 – which will take us many launches to achieve – is to have the vehicle out of the hanger and into the air in under 60 minutes.”

The launch date for Falcon 9’s debut remains fluid, although the vehicle itself is not the determining factor in trying to make a summer launch, claims Musk.

“We’re hoping for a summer launch of the Falcon 9, though I predict that is pending (based on) the development of its payload.” 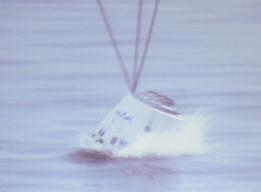 Musk went on to speak about the Dragon capsule that will fly with the manned version of the Falcon 9, noting that SpaceX are looking to enable the vehicle to land anywhere in the world, by adding land landing capability. (Image Left: SpaceX Dragon splashdown).

NASA’s Orion lost nominal land landing capabilities via one of its numerous mass saving exercises – causes by performance shortfalls with the Ares I launch vehicle.

“There’s no major difference in appearance between the manned and unmanned version of Falcon 9, apart from the Launch Escape Tower (and the Dragon spacecraft for human passengers),” Musk noted.

“Dragon is designed for water landing, but could go to land landing later via airbags or a pneumatic piston that pulls on the chute. With that capability you can land almost anywhere, but currently the nominal landing site is just off the coast of California.”

A large part of the speech – the audio (50 minutes) and over 50 slides from the presentation are available on L2’s SpaceX subsection (only click if you are a L2 member) – was dedicated towards SpaceX’s full reusability ambitions, with hints towards using Falcon 1 as a test bed for “beefing up” protection on the stages to allow for reuse, before the full capability is added to the Falcon 9.

“The big thing that has to happen in space transportation is reusability. People sometimes use the Space Shuttle as an example, and say well gee, the Space Shuttle is so expensive and that was intended to be mostly reusable and doesn’t that prove that reusability is a bad idea?  I think that it’s really silly to extrapolate on a single data point.”

“Even if you make the vehicle very efficient, and create the most optimal trajectory, you are still only getting two to three percent of your launch mass to orbit.

“You have to make recovery systems robust enough to withstand re-entry and that is a very difficult problem – no one has really solved that problem yet. At SpaceX we’re trying to make the first stage reusable.

“With Falcon I’s fourth launch, the first stage got cooked, so we’re going to beef up the Thermal Protection System (TPS). By flight six we think it’s highly likely we’ll recover the first stage, and when we get it back we’ll see what survived through re-entry, and what got fried, and carry on with the process.

“That’s just to make the first stage reusable, it’ll be even harder with the second stage – which has got to have a full heatshield, it’ll have to have deorbit propulsion and communication.”

Musk also spoke about his wish to enable the first stage with flyback capability, but added that he would require a large sum of cash to achieve that goal.

“Any pound you use for reusability and re-entry (on the second stage) is a pound subtracted directly from payload, whereas first stage it’s a five to one ratio. This is a problem we’re trying to solve incrementally, but most exciting thing I’ve love to do is a flyback first stage. We’re just missing the billion dollars of capital it would take to try to do that.

“But that’s what SpaceX is aspiring to try and make this work, and I think if we show some progress and success, it would inspire other companies and other countries to try it as well.

“However, the goal for Falcon 9 is that it ends up being the first fully-reusable launch vehicle.” (Image Left: Inside Dragon capsule during ascent and Falcon 9 injecting Dragon into orbit).

Part 2 of Elon’s speech will follow in the coming days, in which he speaks on SpaceX’s association with NASA, the colonization of Mars, downstream satellite contracts, how suborbital is “little league”, and how he “wishes to affect the world in a positive way.”