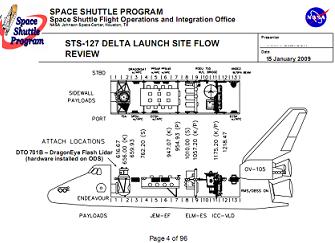 With Space Shuttle Endeavour now well into her OPF (Orbiter Processing Facility) flow for her triple duty requirements as LON (Launch On Need) vehicle for STS-119 and STS-125 and her primary mission on STS-127, the Program Requirements Control Board (PRCB) has completed the Delta Launch Site Requirements Review (DLSRR) for STS-127, a critical step toward the mission’s eventual launch.

While STS-127’s launch date currently remains in a fluid state until the STS-125/HST SM4’s launch date is finalized in the coming weeks, technicians around the United States are preserving all options regarding the mission’s launch, which could occur anytime between May 15 to mid July.

Current milestone charts indicate that Endeavour’s turnaround flow will end on April 14 when she will be mated to her External Tank. 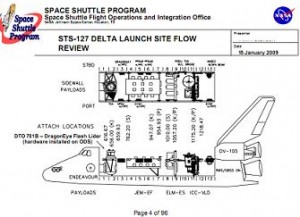 Also, according to the January 8 Milestone Interface Chart, Endeavour’s tank – ET-131 – will arrive on dock at KSC on March 1, and is undergoing no processing issues – according to reports from the Michoud Assembly Facility (MAF) in New Orleans.

STS-127 will be the 23rd flight of Endeavour and the fourth and final scheduled flight of the OI-33 operating software – which first debuted on Endeavour’s STS-126 mission last November. 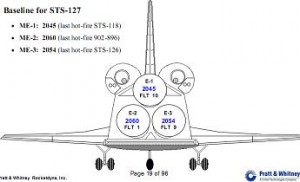 With this information in hand, mission planners have determined that Endeavour’s Ascent Performance Margin will be 1,190lbs assessed for launch on May 15.

The fastener removal is a necessary modification based on the requirement to fly Multiple Headset Adapters on future missions.

Moreover, the update to the mission kit is in regard to the Bay 4 Longeron bridges for the JEM-EF.

“Bay 4 longeron bridges V073-340103-001 and -002 are required for JEM-EF on STS-127. The only flight pair is manifested to support the forward end of Super Lightweight Integrated Carrier (SLIC) currently installed on (Atlantis for) STS-125,” notes the DLSRR presentation.

The delay to STS-125 is directly effecting the installation of the Bay 4 bridges into Endeavour.

“Second ‘original build’ pair (of Bay 4 bridges) was flown on and recovered after STS-107 but has been deemed unusable.”

The Orbiter Project Office (OPO) has currently set into motion two options to mitigate this issue. The first is to modify a set of Bay 3 Longeron Bridges made from Titanium. The second is to build a new set of Bay 4 bridges from Aluminum. 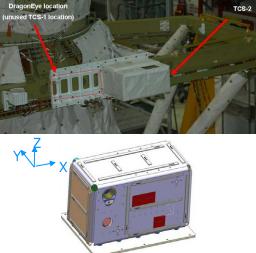 “SpaceX DE is one of two leading candidates for investigation of a flash Light Intensification Detection and Ranging (LIDAR) relative navigation sensor for the SpaceX Dragon vehicle,” notes the PRCB presentation.

The DragonEye DTO will be mounted to the Trajectory Control System-1 (TCS-1) carrier assembly on Endeavour’s ODS starboard location. TCS-2 is mounted to the port location.

For Endeavour’s Thermal Protection System (TPS), 36 cavities were identified at the time the DLSRR was conducted; however, the presentation estimates that a total of 107 TPS removals will be necessary during the orbiter’s flow.

Currently, OPF workers are tracking two potential concerns: the delivery of three good Flow Control Valves (FCVs) for Endeavour (expected to be delivered within a month’s time) and the delivery date of ANDE-2.

The PRCB DLSRR presentation goes on to note that if Endeavour should be required for LON operations for STS-119, “the STS-127 Reconfiguration Engineering Products will be updated by the Engineering Order To Follow (EOTF) process.”

For STS-400, “a Program Configuration Waiver will be submitted in March 2009 to document the differences between STS-400 and STS-127 and allow the launch of STS-400 without a MECSLSI update.”