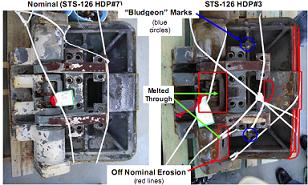 An assessment into the holddown post failure on STS-126’s launch has found that debris that is not captured by the Debris Containment System (DCS) is capable of impacting the vehicle during launch. A solution to STS-126’s anomaly is currently being certified for STS-119.

The Holddown Post (HDP) #3 Debris Containment System (DCS) failure has already led to an agreed redesign of the system, as reported by this site last week.

However, with STS-119 just five weeks away, the need for the modified solution to containing debris during the release of the four holddown posts (studs) on each booster has gained importance, following the findings of a Debris Risk Assessment study, which was created in late December – with refinements to the findings continuing until the end of this week. 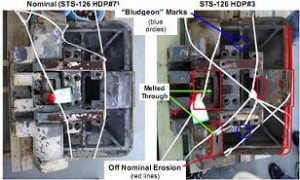 “Objective: Provide assessment of risk to SSV (Space Shuttle Vehicle) from debris liberated by anomaly experienced on HDP#3 on STS-126,” opened the presentation on the assessment’s findings, available on L2.

An integrated team was assembled to carry out the study, which included the MSFC (Marshall Space Flight Center) Lift Off Debris Team, who provided lift off debris expertise and flow field information, along with a team specific to the Reusable Solid Rocket Motors (RSRM).

They were joined by the “USA Graybeards” – engineers that have been involved with Kennedy Space Center systems since the start of the shuttle program and in some cases as far back as the Apollo era. A number of these “graybeards” are currently helping Constellation engineers through their design issues with the Ares vehicles.

“Assignment: Provide a physics based credible and conservative (bounding) debris trajectory analysis that determines if a STS-126 type failed HDP creates debris that threatens the SSV at lift off,” the presentation continued. “Based on the analysis result, provide a quantitative risk assessment.”

Two categories of debris sources were considered, opening with debris from an unseated blast shield cover, and a spring in pieces of different sizes or whole spring – the latter being the largest liberation of debris from STS-126’s event, after it was later found in the north trench at Pad 39A. Plunger pieces of different sizes or whole, and non-metallic shims were also considered in this opening scenario.

The second category referenced debris sources from the RSRB Hold Down Post bore hole, such as plunger pieces and frangible nut pieces, among other items.

Several elements of the opening assessment findings were completed by mid December, such as a “successful TIM (Technical Interchange Meeting) with the Graybeard team, leading to both nominal and failed hold down post system physical characteristics and detailed kinematics explanation being completed, along with the identification of the local geometry near the hold down post.

Other items such as the effect of 2-RSRB plume interaction “needs to be defined to account for possible fluid dynamic mechanism to transport debris toward SSV,” which is set to be completed before the January 13 engineering summit meeting, which will be well ahead of the deadline of January 27 for the installation of the modified DCS on STS-119’s boosters.

The need for a solution to be certified in time for the next launch is made clear by the resulting findings of the assessment study, which shows debris from the holddown posts to be an impact threat on the vehicle. 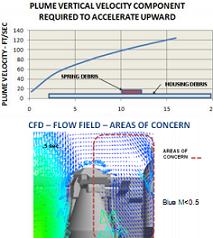 “This in turn imparts horizontal delta V to the debris and the plume and debris impact local H/W redirecting these another 90 deg toward the SSV…but now the plume energy diminishes but the debris has picked up enough velocity (approx 40fps) and might reach the SSV.

“RSRB plume excites spring causing it to break, and becomes debris for above scenario. Debris is propelled down and out, does a 180 deg turn via the flow-field, and has adequate upwards velocity (rebound plus plume-fountain effect) to impact SSV. Debris is propelled away from the vehicle downstream of the RSRB flame trench

“Other: Debris starts outside the plume with initial upwards velocity to impact SSV. Debris liberated from RSRB HDP bore hole is entrained into the plume boundary forcing the debris to impact the MLP H/W with enough energy to rebound and travel up to the SSV.” 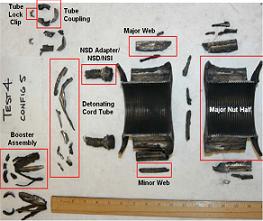 The physical threat to the vehicle relates to either large pieces of debris – such as the large metal spring found in the north trench after STS-126 – or small sharp fragments of metal – such as tube lock clips – potentially impacting an OMS Pod, a SSME (Space Shuttle Main Engine), an aft Reaction Control System (RSC) “venier” thruster, or part of the vehicle’s TPS (Thermal Protection System).

An impact, such as one referenced at 40 foot per second, might not cause damage to the vehicle, as the vehicle is also racing off the pad.

However, engineers will assess the threat to the greatest detail to ensure a full understanding of the issue, should the certification of the modified DCS fail to be approved in time for STS-119.

That risk is also reduced by flight history, with only one other comparable event with the holddown post DCS occurring over the history of the shuttle program – that being in 1993 with STS-56 – which has no notes of vehicle damage being sustained.

With the full assessment study findings set to be completed – as early as this Friday – ahead of the engineering summit, and the expected certification of the modified DCS, STS-119 should be fully protected from the holddown post debris threat, thanks to expansive process that shuttle engineers carry out on every anomaly recorded on the previous mission.