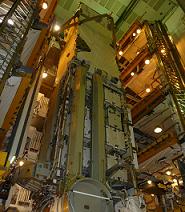 Shuttle Discovery has departed from the Vehicle Assembly Building (VAB) at 5am Wednesday morning, for a dawn crawl to Pad 39A ahead of STS-119’s launch next month. There she will join her payload, which has been installed into the Payload Changeout Room (PCR).

Platforms that have surrounded Discovery and the stack were removed in steps, ahead of the crawler transporter picking up the duo on top of the Mobile Launch Platform in the early hours of Wednesday.

A problem during the mating of the LH2 umbilicals did not cause a schedule impact to Discovery’s operations inside the VAB. As previously thought, the issue was not with the External Tank (ET-127), but on the orbiter side.

As a result, Discovery’s LH2 umbilical hydraulic actuator will be removed and replaced once Discovery arrives at the pad.

“OV-103 (STS-119): Continuing external inspections of orbiter/tank/boosters in conjunction with work-platform retraction. Plan is to roll to pad at 04:00 on Wednesday,” noted the latest Shuttle Stand-up/Integration report on L2. Discovery left the VAB at 5:17am.

“Completed orbiter structural mate and umbilical mate this weekend. Discovered an issue with LH2 umbilical hydraulic actuator; will be doing R&R at the pad.”

Discovery’s huge payload of the fourth starboard Integrated Truss Segment (S6) arrived at the pad on Monday and has been installed into the PCR. It is set to be installed into Discovery’s payload bay on Saturday.

“Payload transfer to the Payload Change-out Room (PCR) is complete and the canister has been lowered and transported to the CRF,” added processing information.

Prior to rollout, a heater controller in the MLP was added to the list of items that will require R&R out at the launch pad. Along with the LH2 umbilical hydraulic actuator, all three of Discovery’s Flow Control Valves (FCVs) will be replaced.

“During GN2 Heater setups with the heater set point set at 0 deg F, the tank temp increased from 68 to 100 deg F upon activation of the SCR1 heater. There should have been no temperature increase,” noted processing information on L2.

The controller is used via the GN2 that is heated prior to being used to purge the engines during tanking operations. This issue has occurred before with these heaters and the controller’s replacement will only take a short amount of time.

One of the last tests of the shuttle stack in the VAB was S0008 – known as the Shuttle Interface Test – which was successful. However, a couple of minor issues were added to the processing reports.

“New issue was taken Monday during the ET/TPS digital camera system functional test for a lack of communication between the GSE laptop and the ET separation camera. Laptop was replaced and the problem cleared; testing is complete.

“New issue during securing for RCS (Reaction Control System) heater activation, the 22D200 power supply was deactivated while engineers were troubleshooting the GN2 heater, resulting in loss of DC power to the heater. Power was re-established troubleshooting continued.”

Over at the Johnson Space Center (JSC), a series of pre-Flight Readiness Review (FRR) meetings are taking place with orbiter related departments, with the first major event of the FRR season (the MOD FRR), taking place throughout the day on January 16.

L2 members: All documentation – from which the above article has quoted snippets – is available in full in the related L2 sections, now over 4000 gbs in size.
STS-119
0
FacebookTwitterPinterestEmail
previous article