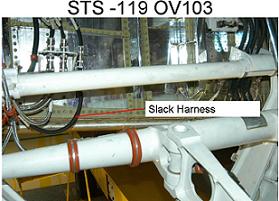 Mating operations have moved past the soft mate phase inside the Vehicle Assembly Facility (VAB), following Discovery’s milestone of rollover ahead of next month’s STS-119. The main issue under discussion is the need to replace the orbiter’s three Flow Control Valve (FCV) which will be carried out at Pad 39A after next week’s rollout.

Discovery arrived in the VAB on Wednesday afternoon, before being transitioned over to High Bay 3 (HB-3) for mating operations with ET-127. S0008, otherwise known as the Shuttle Interface Test, will take place on Sunday, ahead of rollout to 39A on Wednesday.

“Discovery lifted over the HB-3 transom and positioned for mate to ET. Soft-mate of the aft Orbiter/ET attach points (through Thursday, ahead of hard mate). S0008 Shuttle Interface Test: Call to Stations is planned for 0100 EST, Sunday morning. STS-119 rollout to Pad A is planned for Wednesday 14 Jan.”

Discovery’s rollover was delayed by nearly half a day, mainly due to a late requirement to change a tire that was deemed to have lost pressure, and the observation of a wiring harness that was seen to be contacting a surface in the right Main Landing Gear Door (MLGD) – which had the potential of being “pinched” in the mechanism.

The wire bundle that was causing the concern is located in the upper right corner of the wheel well. There are numerous hydraulic lines in the well for the gear retract actuator and the brakes – routed at different locations.

“During Main Landing Gear Door (MLGD) retraction, the convoluted tubing of a wiring harness contacted the smooth surface of the right MLGD,” a processing on L2 explained.

“Following evaluation by (various engineering groups) it was determined that this configuration has been present in OV-103 for at least two launches and the TPS gap measurements show that the harness could not be caught in the door.

“Photos and assessment of OV-104 (Atlantis) and OV-105 (Endeavour) confirm that the slack in the harness is not sufficient enough to become caught in other landing gear mechanisms.

“The convoluted tubing covering the harness will protect from chafing due to contact with the door surface. The cable will be tested in the VAB after first power up of the vehicle.”

While engineering meetings are taking place at the end of the week on the holddown post Debris Containment System (DCS), the main issue under evaluation relates to the requirement to replace all three of Discovery’s FCVs.

The FCV in question relate to the Main Propulsion System (MPS) and the SSMEs (Space Shuttle Main Engines) during thrusting periods. In each SSME, gaseous hydrogen from the low-pressure fuel turbopump is directed through two check valves to two orifices and a flow control valve for each engine.

If the tank pressure is greater than 35 psia, the pressure is relieved through the liquid hydrogen tank’s vent and relief valve. If the pressure falls below 32 psia, the LH 2 ullage press switch on panel R2 is positioned from auto to open , which will cause all three flow control valves to go to full open and remain in the full-open position.

An issue with one of the FCVs was observed on Endeavour during STS-126 launch, leading to the examination of Endeavour’s three FCVs once she returned into her Orbiter Processing Facility (OPF) to determine if they were the cause of the anomaly – or if the problem was with Endeavour’s wiring.

While the anomaly did not have an impact on ascent performance, simply resulting in an improper MPS configuration during SSME operation, any failure of the GH2 FCV is a 1R/2 condition.

Analysis over the holiday period has shown that the issue is with the FCV itself, therefore engineers are removing all the FCVs from the fleet to inspect them at the manufacture for the damage.

“Many folks across Agency have been working on FCV problem over holidays. Got failed valve out of OV-105 (Endeavour). All the valves must be sent to Vacco for disassembly; they are the original vendor and the only ones certified to assemble and disassemble the valve,” noted JSC Orbiter’s expansive notes on the Shuttle Stand-up/Integration report (L2).

“Vacco disassembled it, took the poppet out, sent it to Huntington Beach for examination, scanning electron microscope and NDE (Non Destructive Evaluation) techniques. Are pretty sure what they are seeing is a failure due to high-cycle fatigue. You don’t get the typical striation like in some other materials, but you can see some little half-moon indications.

As part of the investigation, six FCVs have been removed – from Endeavour and Atlantis – for evaluation, with three spare valves heading back to the Kennedy Space Center (KSC) to be installed into Discovery around three days after she arrives at Pad 39A.

“Did get the other flight valves out of OV-105 (the two that didn’t fail), and the three out of OV-104,” added JSC Orbiter. “Those have all been sent to Vacco and disassembled. Inspected the poppets at Huntington Beach with the sim and dye pin techniques. None of those have cracks. There are three spare valves as well that will be getting shipped out from Logistics, through Vacco and will do NDE on them.”

Installing the three valves into Discovery is not a major issue for the February 12 launch target, rather the need to ensure flight rationale is in place for the replacement valves that are required for the fleet – notably on Discovery and the Launch On Need vehicle for STS-119 (Endeavour) – is the challenge.

“The challenge is to find six good valves to fly, three for the flight vehicle and three for the LON vehicle, out of the 11 valves that they have left in inventory,” added Orbiter JSC. “Right now, do not have the capability to build up and assemble new valves from parts because they do not have a certified test stand. The vendor is working on putting that together, but that is probably 3-4 months away.

“There is a lot of work going on to try and develop flight rationale. Part of that is looking at how tolerant are we to this particular failure. Ultimately, our flight rationale will probably have some component of risk acceptance in it.”

The Orbiter Project – a separate group of engineers at the Johnson Space Center (JSC) – added that the two inch line, which is associated with the failed valve on Endeavour, will also be removed for evaluation.

“On the FCV, the team has done a fabulous job working over holidays. Are now in process of trying to understand flow environment inside the valve,” added the Orbiter Project via notes on L2. “Had two similar failures in ATP when preparing the three valves for Endeavour in early 1990s.