Discovery is scheduled to receive the replacement Flow Control Valves (FCVs) over the weekend, ahead of a key flight rationale meeting at the Agency level Flight Readiness Review (FRR) next week. Meanwhile, a small bird managed to find its way into the Payload Bay of Endeavour.

Processing at the pad remains on schedule for the February 12 launch target, with closeouts for flight continuing on the vehicle.

Only one issue of note is being worked, relating to Orbiter Electrical engineering noting a failed HI-POT TEST at pin x of 54P111, MEC (Main Engine Controller) 1 Interface. This was classed as a constraint for call-to-stations for Final Ordnance Installation.

A “High-Pot” test generally involves applying a much higher than normal voltage (kilovolts) to signal wires, and measuring the resulting current that is drawn from the test equipment.

Using a much higher voltage than normal on the signal line stresses the insulation of the wire with the intent to test its ability to prevent signal currents flowing where they should not flow.

The test discovered a hole in the shielding inside the connector back-shell. However, a resolution was being worked during Friday, after the connector was repaired, ahead of a retest.

With the shipment of the three replacement FCVs from fabricator Vacco to the Kennedy Space Center (KSC), engineers are waiting on the expected green light to proceed with the installation over the weekend.

Weekend work on the shuttle out at Pad 39A is scheduled to be completely focused on the replacement of the valves, while flight rationale – based on “risk acceptance” – is built ahead of the Agency level FRR next week.

“Have been working very hard on FCV topic to determine failure parameters. Want to determine if flow is sensitive to orientation of sleeve or different sizes of poppets,” noted the latest Shuttle Stand-up/Integration report on L2.

“Work continues to define environment and sizes of particles that could be released from poppet, as well as size of an original crack that could result in failure due to high-cycle fatigue.

“Concerning FCV issue, rationale for flight will be based on risk acceptance. This will be presented at FRR next week.”

Modifications to the Debris Containment System (DCS) on the Solid Rocket Booster (SRB) holddown posts out at Pad 39A have been completed. The modification was called for ahead of STS-119, following a debris event during STS-126’s launch.

The STS-126 event relates to the presence of multiple pieces of debris shortly after the detonation of the NASA Standard Initiators (NSI) on the SRB hold down bolts, classed as “Debris ejected from the area of the Debris Containment System (DCS) of HDPs (Holddown Posts) 1,2,5,6, and7 during NSI firing,”

The second HDP issue was classed as the most serious, relating to the DCS on HDP 3, which saw the plunger and spring extended through DCS bore hole during lift-off, resulting in the plunger and spring releasing from SRB aft skirt. The spring – a large piece of debris – was later found in the north flame trench.

Following a large investigation, engineers deemed the debris incidents as a potential threat for impacting the vehicle during the opening couple of seconds of launch. As a result, a redesign was called for – which was successfully worked in just a matter of weeks.

Engineers took just two days to carry out the modification as only the upper blast container assemblies that hold the plunger/spring/pawls/stop-blocks was in need of replacement.

Over in OPF-2 (Orbiter Processing Facility), Endeavour – processing for her primary mission of STS-127 – made a new friend in the form of a bird that managed to find its way into the Payload Bay of the orbiter. 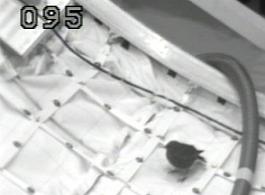 The visitor was spotted on closed circuit cameras, much the amusement of engineers when they first saw the report on the log entries.

“Bird reported in midbody, reports it as a common bird and is described as smaller than a crow, bigger than a sparrow,” noted the log, which was acquired by L2 processing information. “Trying to locate a hawk to remove intruder bird. Bird possibly in the midbody and underneath the liner someplace.”

“On another front. Forward monitor has a one-time entry pass for the bird if needed,” joked the following entry, before being retorted by the original reporter, “I am not making this up. Bird sitting on blanket next to GSE (Ground Support Equipment) keel approx 6ft aft of ODS (Orbiter Docking System). (Can be seen on) Camera 95…just staring at us “

The unbadged visitor’s one time tour of Endeavour was soon put to an end, with the log ending: “The Bird has now been escorted out of the Bay.”