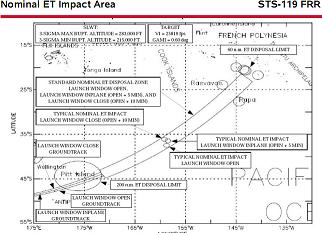 With Space Shuttle Discovery enjoying a smooth and relatively issue free processing flow at Launch Pad 39A, NASA managers have completed two of the three mandatory Flight Readiness Reviews (FRRs) that will clear Discovery and her seven member crew for launch in mid February.

Among the various items discussed by the FRR included a detailed look at Discovery’s flight and mission plan as well as International Space Station (ISS) requirements prior to Discovery’s arrival on Flight Day 3 (FD-3).

To ensure that the tight choreography of launch and docking operations to the ISS remains on schedule, and that Soyuz and Shuttle do not interfere with one another, the ISS with will perform a series of two rendezvous phasing burns using the currently-docked Progress 31’s engines.

These two burns, the first of which was completed on January 15, will adjust the ISS’s by a total of 4.6 meters per second.

In addition to this reboost, the MOD has concluded that a mated reboost of the ISS using Discovery will not be required.

“There is not a requirement for mated reboost and propellant has not been protected for it. Current prop margins do not show the Orbiter has the capability for it.”

Nevertheless, should the necessary propellant become available real-time during the mission, a mated reboost can be performed within the mission timeline. 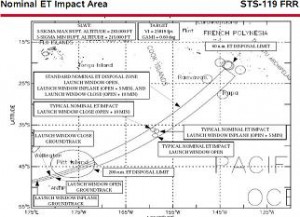 As always, every part of Discovery’s flight plan has been thoroughly scrutinized by mission managers, including the nominal ET (External Tank) disposal area in the Pacific Ocean.

For STS-119, assuming a nominal ascent, ET-127 will reenter Earth’s atmosphere over the southern Pacific Ocean, with a ground disposal track stretching from just east of Pitt Island northeast to the French Polynesia.

The predicted ET disposal area for the ten minute launch window is in the center of the disposal track, hundreds of miles away from any landmass.

For Discovery’s ascent, all nominal abort modes will be available for the crew in the event of an engine or systems failure.

Current projections indicate that the first opportunity to perform a Trans-oceanic Abort Landing (TAL) will occur 145secs (2mins 25secs) after liftoff and would result in an abort to Moron, Spain, while the first opportunity to perform a TAL abort to Zaragoza, Spain – which is the primary TAL site for STS-119 – occurs 150secs (2mins 30secs) after launch.

As always, a Return to Launch Site (RTLS) abort is available to the crew from liftoff through the first four minutes of flight, at which point Discovery will be traveling too fast and be too far down-range from KSC to perform that type of abort.

As has become custom now, Discovery’s crew will perform the standard inspections of their ship’s Thermal Protection System (TPS) Wing Leading Edge (WLE) panels and upper surfaces on FD-2 – the same day the Russian Progress 32 vehicle docks to the ISS.

For rendezvous and docking operations on FD-3, the maximum altitude at which Discovery can successfully dock to the ISS is 195nm based on the vehicle’s weight.

Following Discovery’s docking, the crew will get right to work on FD-4 preparing for their first EVA on FD-5. 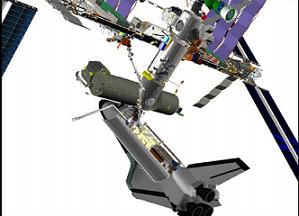 On FD-5, Steve Swanson and Rick Arnold will conduct the mission’s first EVA, installing the S6 truss to the end of the Starboard truss. This operation will include connecting power and data umbilicals and preparing the FVRs (Photovotaic Radiators) and SAWs (Solar Array Wings) for deployment.

Also part of EVA-1 activities will be the jettisoning of four thermal shrouds on the S6 element.

The shrouds are identical to the ones jettisoned during the STS-117 mission – which installed the S3/S4 truss element – in June 2007. Those shrouds re-entered the atmosphere very quickly, in about 10 days, and were fully trackable by USSTRATCOM. Therefore, jettisoning these shrouds is not a hindrance to Discovery after she undocks from the ISS. 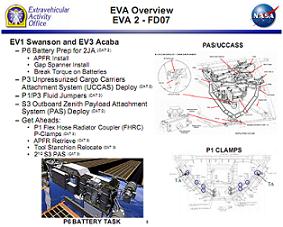 EVA-2 will be performed on FD-7 by Steve Swanson and Joe Acaba. During this spacewalk, Swanson and Acaba will perform several tasks to prepare the P6 truss for a battery R&R (Removal and Replacement) on STS-127 later this year, as well as a fluid jumper operation between the P1 and P3 trusses.

FD-8 will see the deployment of the SAWs on S6, followed by EVA-3 on FD-9 by Joe Acaba and Rick Arnold.

During EVA-3, Arnold and Acaba will relocate a CETA cart, Lube LEE B, and install thermal covers on the Dextre robot.

After a much deserved break on FD-10, Steve Swanson and Rick Arnold will perform the mission’s fourth and final spacewalk on FD-11. During that EVA, Swanson and Arnold will install a GPS antenna on the Japanese Experiment Module, photograph the S1 and P1 radiators, and deploy three payload attach structures (PAS) on the S3 truss.

On FD-14, the Flight Crew will perform a checkout of Discovery’s Flight Control Surfaces, a hot fire test of the Reaction Control System, stow the Ku Band antenna, and prepare the crew module for reentry and landing on FD-15.

Major Mission Objectives include the CAT I priorities of rotating ISS crewmembers Sandy Magnus and Koichi Wakata, installing and activating the S6 truss, and transferring critical items and water by FD-6. 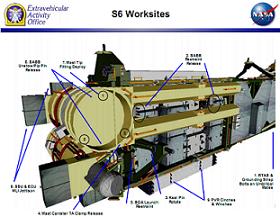 By FD-11, all CAT II priorities must be complete. These include deploying the S6 PVRs and SAWs on the S6 truss, the relocation of one CETA cart, and P6 battery R&R preparations.

Finally, by FD-14, all CAT III priorities must be complete, such as the deployment of the S3 Upper Outboard PAS, deployment of the P3 Nadir UCCAS, ISS payload research, and the transfer of nitrogen from Discovery to the ISS.

All CAT IV priorities are get-ahead tasks that must be performed by FD-11. These include Dextre thermal cover installation, installation of insulation on Node-1 forward SSPTS (Station to Shuttle Power Transfer System) floating connectors, and the deployment of the S3 Lower Inboard PAS.

After Discovery leaves the station, the Expedition 18 crew will continue sampling the Water Recovery System to ensure processed water quality, continue troubleshooting of the Urine Processing Assembly, perform checkout operations on the Japanese Remote Manipulator System and the Japanese Experiment Module airlock, and prepare for the arrival of the Expedition 19 crew in late March – approximately six weeks after Discovery’s mission.