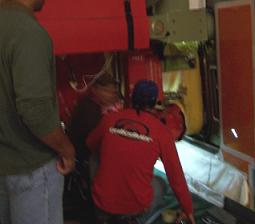 Shuttle Discovery as the STS-119 stack will undergo the Shuttle Interface Test (S0008) on Sunday, although engineers had to work through issues with the mating of the orbiter/ET umbilicals – which have since been resolved.

The STS-119 stack is being worked through Orbiter/ET mate (S0004 operations) since Discovery was transitioned over to High Bay 3 (HB-3) inside the Vehicle Assembly Building (VAB), with soft mate and hard mate going to plan – bar the issue with the umbilicals.

“Hypergolic preparations for propellant loading at Pad A are in work. APU Carts have been transported to FSS 135′ level and OMS/RCS flow meter R&R is complete. Cryogenic propellant storage tank (LH2) replenish has begun in preparation for launch. Payload transfer to Pad A preparations has begun.”

Currently, the Shuttle Interface Test is set to take place on Sunday, along with preparations to transfer STS-119’s payload to the Payload Changeout Room (PCR).

Following hard mate operations, three umbilical studs are tensioned on each side of the tank – LH2 and LOX sides – two of which are drawn together between the External Tank and the orbiter.

This operation has been an issue free operation for over 100 matings. However, as seen on a couple of recent matings, problems were again encountered with over-tensioning.

During mating and connection operations, MEQ engineers monitor the studs to ensure they are correctly tensioned during the procedure. They observed problems on the LH2 side, as the stud torque was deemed to be above maximum allowable levels.

Engineers stopped the operation (see image left from L2’s live STS-119 processing coverage) and asked the hydraulics engineers to make sure the hydraulic retract actuators were free and not locked up. The LO2 side was proceeding nominally at the time. Troubleshooting was continuing through Saturday, although it is not known if there will be a delay to Sunday’s S0008.

No root cause has been found as to the reason why the studs are over tensioning during this operation – which was most notable on Atlantis’ mate with ET-127, when an umbilical plate was damaged due to the issue. While Discovery is now using that same tank, the problem is believed to be on the orbiter side.

UPDATE: LO2 and LH2 umbilical mates and stud tensioning and verification are complete as of early Saturday afternoon, allowing the on schedule start to S0008 operations.

Meanwhile, good news is being noted on the effort surrounding the Flow Control Valves – which will be replaced on Discovery shortly after she arrives at the pad, following the problem observed on Endeavour during STS-126’s launch.

“Had a good session on FCV poppet anomaly. Delivered the spare poppets to Huntington Beach, and examination is complete. Electron-microscope investigation reveals no cracks in these units,” noted JSC Orbiter on the latest Shuttle Stand-up/Integration report on L2. “This is very good news, as they are scheduled for installation for the next flight.

“Will complete dye-penetrant analysis, and expect to have the parts back to vendor for reassembly. Delivery to KSC will follow. Received a good status from M&P area; they believe the issue is high-cycle fatigue, but testing will continue. Are pursuing testing to better understand effects of H2 embrittlement and how this would affect propagation of the flaw.”

The Orbiter Project – also at the Johnson Space Center (JSC) – continued the positive tone on the path towards a resolution.

“Had good meeting. To date, we have examined eight poppets that have flown (three from OV-104 (Atlantis), two from OV-105 (Endeavour), and three spares). All we are seeing is a machining/grinding artifact of roughly four mils. This is an order of magnitude less than the 40 mils seen on the failed items.

“There are 22 spare poppets that are unflown. These will be examined for machining artifacts. If what is found on the unflown items matches the others that have been studied, it will provide additional confidence that we are not growing these cracks in flight. Analysis is in work. Results are expected mid-February. The next meeting on this topic will be next Tuesday.”

Discovery’s two sisters are enjoying smooth proceeding flows, with Atlantis patiently waiting for confirmation of a May launch date for the realigned STS-125 mission to the Hubble Space Telescope.

Endeavour, however, is at a busy stage of her processing, which was marked by the removal of her three SSMEs (Space Shuttle Main Engines), following their role on STS-126.

“SSME (Pratt & Whitney Rocketdyne/KSC): All three engines have been removed from OV-105,” noted the Stand-up. “Engine number three from OV-105 has been reassigned to Discovery.” 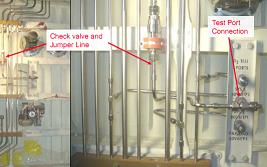 In other notable processing work, Endeavour’s MO10W Panel O2 System number 2 line is undergoing replacement, following the temporary installation of a jumper line for one mission – required after an anomaly was noted ahead of last year’s mission.

The new MO10W is installed; with engineers now working to reconnect all the associated fittings.

Other work taking place revolves around checking Endeavour’s TPS (Thermal Protection System), in order to plan out any required repairs and replacements. The current stage of that process involves thermography on chin panel and nose cap – which has been completed.

Endeavour is being readied for the multi-role of once again being the STS-400 LON (Launch On Need) shuttle in support of STS-125, and her primary mission of STS-127. The tank Endeavour will use – ET-131 – is enjoying a smooth processing flow at the Michoud Assembly Facility (MAF) in New Orleans, and remains on schedule to support.

A decision on aiding Ares I-X’s launch date by utilizing Pad 39A for both STS-125 and STS-400 – as opposed to holding on to the current plan of hosting STS-400 on Pad 39B – is still pending.

“A meeting was held to discuss single versus dual pad Probabilistic Risk Assessment (PRA),” added the Stand-up. “Agreement on methodology was reached, and input will be incorporated into the presentation. The packet will be ready for discussion soon.”

Should managers decide that it isn’t viable to place STS-400 on Pad 39A very shortly after STS-125 launches, Pad 39B will not be handed over to Constellation until at least mid-May. Such a decision would likely delay Ares I-X – due to pad work required for the test flight – from its July launch target, to around October.