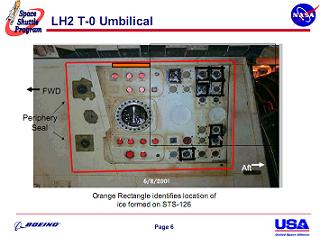 Pending work on outstanding issues, the Agency level Flight Readiness Review (FRR) have decided to aim for No Earlier Than (NET) February 19 as the STS-119 launch date, based on issues with the Flow Control Valves (FCV). Several items of interest are being looked at, mainly from the standpoint of flight rationale – which is expected to be eventually approved.

It is normal for an FRR to conclude successfully with outstanding work, with departments posting approval via “pending closure of open work, ready to proceed with the launch of STS-119/15A.”

Open work was pre-empted by shuttle manager John Shannon at the start of week on the latest Shuttle Stand-up/Integration report on L2.

“Have a little bit of open work coming out of FRR,” noted Mr Shannon. “The last two weeks have been very busy in some areas. Take care of your people; make sure that we are going to go into a flight with a well rested team that can handle any in-flight activities that we need them to. I will count on you guys to monitor.”

An issue during the pad flow – which is casuing delays to the completion of ordinance installation on the vehicle – is under resolution. With the change to the NET launch date, this operation is now on hold.

The pad flow issue is not related to the changeout of the three Flow Control Valves (FCVs), which proved to be the main item of interest with STS-119’s recent flow. The majority of the FCV work has gone to plan, with a secondary wiring issue relating to a repair of an area of kapton insulator surrounding a pyro wire.

“S5009 Final Ordnance Installation/Connection is complete up to the Interface Test and holding for work on (issue that was) picked up to repair Kapton and shield damage found on a Pyro wire located in the Aft compartment,” noted Tuesday processing information on L2. “This constrains completing the Orbiter PIC Test in S5009 and Ordnance installation.

Two challenges faced the FRR process to approve STS-119’s launch date in relation to the FCVs, with the successful changeout of the valves on Discovery, and Endeavour – the orbiter on which the issue was first observed during her launch on STS-126 – due to LON (Launch On Need) requirements.

“At the Pad, have the FCVs installed and retested. That was a very good effort all across the Program, and it went very well over the weekend,” noted the Stand-Up report. “Continuing to work on FCVs for next vehicle (Endeavour). Have two more valves that will go through source inspection at Vacco for delivery later this week.”

The FRR also heard the latest progress on flight rationale for flying with the replacement FCVs, which is not expected to be an issue long term. Flight rationale will be based on risk acceptance, with continued work being utilized to fine tune all expected conditions on the valves during launch. Managers will meet in a week’s time to discuss progress.

“Really appreciate the work by the GO team getting the three FCVs installed over the weekend,” added JSC’s Orbiter Project. “It was very important to get those specific valves installed in their specific engine slots for STS-119.

“Those valves have been chosen because they flew successfully for nine times on OV-103 in the past. Trying to pull all the data from those nine flights to show that the prediction for STS-119 would be within family of the pressure temperature throttle settings for those flights.” 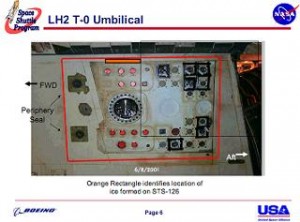 Other items of interest related to the holddown post Debris Containment System (DCS) modification, which has been completed out at Pad 39A, and the ice debris threat, discovered on the orbiter side of the LH2 T-0 umbilical.

A follow-up article – based on five PRCB (Program Requirement Control Board) presentations on L2 – will be published on the forward plan later this week.

A Launch Commit Criteria (LCC) deviation has also been approved for instances where areas of topcoat are observed to liberate from the top of the tank, when the GOX vent hood is removed and retracted around two minutes prior to launch.

“Approved a LCC deviation for this flight to ISO-9001, basically adding verbiage from 83303 about the topcoat coming off the tank whenever we pull the GOX vent hood,” added KSC’s Launch Integration Manager on the latest Stand-Up report. “There were no dissenting opinions. That deviation will be in place for this launch.”

Over at JSC, a short in the circuitry relating to the pilot seat adjustment motor in the orbiter trainer will require clearance for the same system on Discovery, which is expected to be approved. However, it may be included in the post-FRR outstanding work.

“Last week they smelled smoke at Building 9; tracked it down to the pilot seat in the trainer. Seemed to be a short in the circuitry. Got the system safe. Got the seat pulled out and sent over to the for inspection over the weekend,” added the Stand-Up.

“They have confirmed there was a short in motor brake for adjusting seat. There was some charring of external chafe protection sleeve. It looks like the Kapton on the wire was still good. Confirmed there are some differences in the circuit protection between the trainer and what is onboard for the vehicle.

“Still have to do some more work to write the non-flight constraint for OV-103. Now believe there are sufficient differences between the way the trainer is wired and the way the vehicle is wired that it can be cleared as a non-flight issue. There is still work ongoing on this. Of course, will need to figure out what needs to be done for the trainer, because we don’t want this to occur again.” 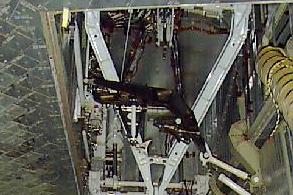 The remaining items, which include the observation of contamination on Endeavour’s Main Landing Gear Door’s thermal barrier during processing for STS-127, are also expected to gain flight rationale.

“Last week, while were preparing to install some of the MLGD thermal barrier on OV-105, a technician cut a segment and was getting ready to install it and noticed on the interior of the seal that there was some contamination, a brown discoloration and a white powdery contamination.

“Other seal lots were looked at NSLD, and we found that almost all the lots have the white powder. It appears to be left over from the manufacturing process where they make the seal by wrapping it around a salt rod and then dissolving the salt out from inside of it after the seal sets up. Think the white is just left over salt, working to confirm that. The brown discoloration appears to be something else.

“Also during inspections in association with the brown contamination, there were areas where the seal was cracked; where internally it had started cracking. Cracking of the seal material will cause a reduction in seal compression. Determined that some of those installed on OV-103 are from a lot which the inspection indicates cracking. Working some compression tests this week.

The STS-119 flight crew were set to head into quarantine on Thursday, ahead of flying to KSC on either Saturday night or Sunday morning. Due to the required sleep shift to place their body clocks in line with the mission timeline, the crew were to undergo a “180 sleep shift” and “will be up all night” on Saturday. However, this is on hold, pending a new launch date.

Discovery on track as STS-119 heads into Agency FRR