While the majority of engineering concentration on the Flow Control Valve (FCV) flight rationale for Discovery and her STS-119 flight, Atlantis – and Endeavour as her rescue support – currently remain on track for their May date surrounding STS-125.

With STS-119’s NET (No Earlier Than) only slipping my a matter of a few weeks during the drive to gain flight rationale, no downstream fallout has been suffered by the flagship mission to service the Hubble Space Telescope in May.

STS-125, which will be conducted by Atlantis, is still tracking a May 12 launch date, with Endeavour ready to support as the STS-400 LON (Launch On Need) rescue vehicle.

Although the single vs dual pad debate is yet to reach a conclusion, and the replacement Science Instrument Command and Data Handling (SIC&DH) unit – which is undergoing Thermal-Vac testing at the Goddard Space Flight Center (GSFC) – is awaiting a firm shipping date, only a call to redesign the FCVs via STS-119’s continuing discussions would directly threaten the May 12 target at this time.

That’s mainly thanks to the smooth processing of both Atlantis and Endeavour, and the lack of pressure from the shipping of the required External Tanks (ETs), previously one of the main concerns with the downstream schedule.

ET-130, which will fly with Atlantis, is already mated with its twin Solid Rocket Boosters (SRBs) inside the Vehicle Assembly Building (VAB), and last week was “rolled around” from High Bay 1 to High Bay 3, in order to make room for the build-up of the STS-400 (STS-127) stack on the Mobile Launch Platform (MLP-3).

Atlantis herself – over in Orbiter Processing Facility High Bay 1 (OPF-1) – is in the process of completing final closeouts, which include the closure of the Payload Bay Doors (PLBDs) ahead of rollover to the VAB.

This coming week will involve the removal of the strongbacks from the doors, which are used to allow OPF mechanisms to open and close the doors, as the orbiter’s own door motors are only strong enough to work in the micro G on orbit.

“Airlock waterline installation continuing. The water lines are installed and are now awaiting o-rings and filter installation. The work is expected to continue through Tuesday of next week.”

The only issue of note relates to the fleet as a whole, and was noted on Atlantis’ processing notes.

“Removed window carrier panels from windows 1 and 2, performed window fastener torque checks, and are waiting for Engineering’s evaluation,” which in turn speaks of an issue found with Endeavour’s windows.

Endeavour, processing for her primary mission of STS-127 – which will follow the standdown from her LON requirements in support of STS-125 – has undergone usual replacement work on a number of her windows, including the window which was damaged by a Micrometeoroid Orbital Debris (MMOD) strike during the latter part of STS-126.

During this work, engineers noticed that some of the window fasteners broke away under low torque conditions. Evaluations are taking place on whether a modification, noted as a new locking feature design, will be required on all windows, across the fleet.

Work has already taken place on installing the new design on some windows on the fleet. However, if evaluations call for it, two windows on Discovery will require work ahead of STS-119. Such work would not cause an additional delay to the current NET date of February 27.

“A potential issue came up with windows. Were doing torque checks on OV-105 (Endeavour) and found some fasteners with low break-away torques,” noted the Orbiter Project Office in notes on L2. “Decided to check the torque in the ‘on’ direction, and did not understand that data.

“So, they got some data they didn’t understand when they looked at the torque of these fasteners. It is not clear if there is a problem, because the data received is highly influenced by the pattern in which they took the date. Torquing the fastener will affect the reading on the fastener next to it.

“A worst case potential is that we might have to go out and do some retorque on two windows on OV-103 (Discovery) that have this new locking feature mod, Window #7 and #3.” 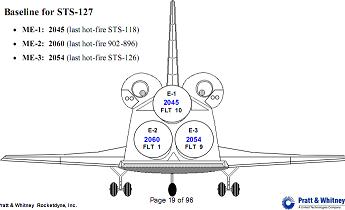 Over in OPF-2, processing has been proceeding to plan, with the milestone of SSME (Space Shuttle Main Engine) installation set to take place in around two weeks.

Engines ready to install on OV-105 on March 1 include 5045, 5060, and 5054,” noted Pratt & Whitney Rocketdyne/KSC on L2 processing information. “These are through their major milestones and into final walkdown.”

Work on Endeavour over the weekend has been associated with her Thermal Protection System (TPS), with Monday marking the testing of her Station to Shuttle Power Transfer System (SSPTS).

“SSPTS overvoltage PTU (Power Transfer Unit) 1 & 2 testing pre-ops were worked. Testing is to begin on Monday,” added processing information. “NH3 boiler tank servicing has been rescheduled until next Tuesday due to a servicing cart issue.

“The APU GN2 QD (Quick Disconnect) heater mod work has been rescheduled for Monday and Tuesday next week. The MPS CV16/PD9 validation test was successfully completed yesterday. Orbiter docking mechanism functional is complete to date and will continue.”

Endeavour will be using ET-131, which – unlike the tanks over previous years – will arrive in plenty of time, arriving on dock at the Kennedy Space Center (KSC) somewhere between the 23rd and 25th of this month.

Once again, it’s been a superb effort by the engineers at the Michoud Assembly Facility (MAF), despite being aided by several delays in the downstream manifest, which earned deserved praise from shuttle manager John Shannon.

“Expect to complete all build activities by February 14. The tank will be weighed and rolled to the barge on Sunday for departure to Gulfport, MS,” noted Lockheed Martin/MAF processing information.

“Mr. Shannon congratulated the team at MAF for all of their hard work on getting this tank ready ahead of schedule.”

All tanks due to launch throughout the 2009 schedule are also on – or above – schedule on their shipping dates.