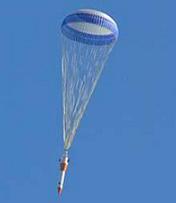 The Jumbo Drop Test Vehicle is in final preparations for a February 26 drop, as part of the Ares I First Stage parachute tests. Meanwhile, the little-known Max Launch Abort System (MLAS) will conduct its first test in March.

The first test of the giant parachutes that will be tasked with easing Ares I’s five segment Solid Rocket Motor First Stage’s return to earth for splashdown in the Atlantic didn’t go fully to plan, with damage sustained to the JDTV – which mimics the Ares I First Stage, if not by appearance – during its debut drop test last summer.

An Integrated Product Team (IPT) conducted a design and analysis review of modifications to the JDTV, which resulted an increase to the strength of the buckled components, following its hard landing, and the inclusion of break-away fins – which were re-manufactured prior to the upcoming test.

This should avoid future damage to the reusable test vehicle, which is deployed out of the back of a US Air Force C-17 transport on an extraction pallet.

Teams successfully completed the tow tests of the new C-17 air drop extraction (pallet) system to be used on the upcoming JDTV parachute drop tests. A new extraction system was required since the standard extraction system utilized by the Air Force has a 60,000-lb extraction limit.

“The test consisted of towing the modified drogue and extraction chutes with the Vectran rope behind a C-17. The test objectives were to measure and record the tow forces of the parachutes at various air speeds and parachute reefing positions and visually record their proper deployment.”

The drop will take place at 10am on February 26 – weather permitting – at the US Army Yuma Proving Ground, located close to the Arizona-California border, which has been the site for most of the drop tests for the Constellation program.

Last summer, the Orion Parachute Test Vehicle (PTV) – a truncated looking Orion – suffered a failure, ripping off its parachutes and crashing to the ground, after it became inverted following extraction from a C-17 aircraft.

The vehicle is now scrapped, located in the “boneyard” of the Army base.

In 2007, the third Parachute Drop Test (PDT) – which was testing a pilot parachute for the Constellation program – resulted in the Drop Test Vehicle (DTV) being destroyed.

The test vehicle hit the ground with such velocity, special excavation equipment was required to recover the nose of the DTV – which was buried 30 feet below the surface. All other tests have been deemed a success. 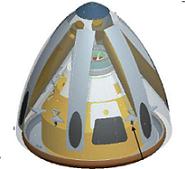 Specially funded outside of the Constellation program, under the leadership of former Constellation head Scott Horowitz and NASA Engineering and Safety Center (NESC), the MLAS is confirmed to be just a month away from an opening salvo of tests.

First revealed by NASASpaceflight.com last year, several presentations on L2 outline the concept that appears to have grown out of the LAS trade studies in 2007.

The trade study presentation – also on L2 – shows a ‘hand drawn sketch’ by former NASA administrator Mike Griffin, dated March 22, 2006, that is believed to be the origin of MLAS.

The “alternative” Launch Abort System was originally set to carry out a pad abort test in September, 2008. However, concerns the system is far too heavy for Ares I, and the continued push to baseline the traditional “tower’ LAS, initially led to rumors the project had been cancelled.

Although never specifically noted as anything other than an alternative “fall back position” system, it is possible MLAS is part of a backup plan for a Human Rated Ares V, given initial studies into man-rating the huge vehicle note it would be impossible to stack with the current LAS tower, due to height restrictions regarding vehicle integration inside the Vehicle Assembly Building (VAB).

With MLAS on top of Ares V, the vehicle could be stacked within current restrictions. A Human Rated Ares V would only become a reality if Ares I development was ceased, and the alternative options of EELV and Direct’s Jupiter vehicles failed to win approval under such a scenario.

For now, the Constellation program are only classing MLAS as an “alternative” to the LAS tower, even though it would be near unthinkable to make such a large change to Ares I at this stage of development. 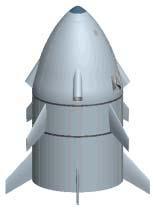 “Like the leading NASA launch abort concept, MLAS offers a safe, reliable method of pulling the spacecraft capsule and crew out of danger in the event of an emergency on the launch pad or during the climb to Earth orbit,” noted NASA in releasing the date of the pad abort test.

The dates listed involve a parachute drop test of the MLAS on March 5, followed by the pad abort test on March 27.