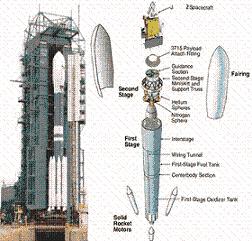 A United Launch Alliance Delta II rocket has launched with the NASA NOAA-N Prime spacecraft at the third attempt to launch from Space Launch Complex-2 at Vandenberg Air Force Base in California – at 2:22am PST – following two scrubs due to technical issues.

Problems with re-pressing first stage nitrogen – relating to a GSE solenoid – caused a scrub around 30 minutes prior to the scheduled launch time on Wednesday.

Engineers repaired the issue in time for a 24 hour turnaround, before another technical issue with the payload fairing air conditioning compressor at the pad put pay to attempt two.

The third attempt had a 60 percent weather constraint, but launched without issue.

The Delta II tasked with launching the NASA spacecraft is the 7320 configuration, which involves a two stage vehicle with three solid rocket motors on the first stage and a 10-foot diameter composite fairing.

The launch marks the 20th anniversary month of the first Delta II launch. That launch occurred Feb. 14, 1989, from Cape Canaveral. The Delta II successfully delivered the NAVSTAR II-1 satellite for the Air Force. NAVSTAR is now known as GPS.

NOAA-N Prime is the latest and final spacecraft in the Advanced TIROS-N (ATN) satellite series. All have been designed and built for the National Aeronautics and Space Administration (NASA) and the National Oceanic and Atmospheric Administration (NOAA) by Lockheed Martin since the first Television and Infrared Observational Satellite (TIROS) weather satellite launch in April 1960.

Most of the spacecraft in the series have operated far longer than originally expected, earning them a reputation as the workhorse of the civil space Earth-imaging inventory.

“Our long-standing partnership with our NASA and NOAA customers is a source of genuine pride for Lockheed Martin.”

As it orbits the Earth, NOAA-N Prime will collect data about the Earth’s surface and atmosphere that are vital inputs to NOAA’s weather forecasts. NOAA-N Prime has imaging and sounding capabilities that are broadcast around the world and recorded on board for playback over the NOAA and European Organisation for the Exploitation of Meteorological Satellite ground stations.

NOAA-N Prime will replace NOAA-18 in a 2:00 pm local solar time orbit as the primary afternoon spacecraft. NOAA-N Prime will carry the same primary instruments as NOAA-18 plus an Advanced Data Collection System and an improved Search and Rescue Processor provided by France.

NOAA-N Prime will be renamed NOAA-19 after achieving proper orbit. The comprehensive on-orbit verification period will last for 45 days.

“Within the US and around the world there is a growing demand for reliable coverage and accurate data from satellites that can tell what’s happening in the environment,” added Mary Kicza, assistant administrator for NOAA’s Satellite and Information Service. “Launching NOAA-N-Prime will help meet the demand.”