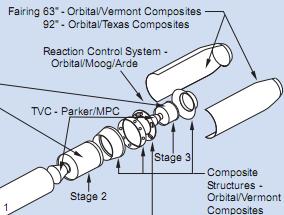 Orbital Science’s Taurus XL rocket lifted-off from Space Launch Complex 576-E at Vandenberg Air Force Base, California, carrying the Orbiting Carbon Observatory (OCO) this morning. However, the mission was deemed as a failure during or slightly after third stage flight, after it was noted the fairing failed to separate as required.

“OCO did not achieve orbit successfully,” noted PAO George Diller in an anomaly update. “We are still looking at the telemetry, and it appeared there were indications of problems with fairing sep, but we not sure at this time.

“Controllers are checking the status of the spacecraft, to confirm location and orbit. However, the data around fairing sep is not what we expected to be. We believe that is what happened during the failure.

“Right now we do know we have not had a successful launch and will not be able to have a successful mission.”

A later update confirmed the vehicle had failed to make orbit – due to lack of Delta V that would have been gained by the loss of the heavy fairing,  resulting in the spacecraft eventually splashed down near Antarctica, it is believed.

“When fairing comes off, little wires that are looped back break. We did not get indications that those broke,” noted Taurus Program manager John Brunschwyler.

“Temps did not change after it should have separated. And fairing is pretty heavy, so jump in acceleration. We did not get that jump.”

The failure – the first under the watch of NASA’s Launch Services Program (LSP) – will lead to an investigation board being set up, whilst evaluations take place into the amount of flight spares, should NASA decide order a new OCO.

Taurus’ next mission, with the GLORY satellite, will remain on hold, pending the conclusion of the investigation.

The Taurus series of launch vehicles are based on the three stages of the Pegasus vehicle – minus the wings – with a new upper stage. Versions which have flown include the Taurus 1110 and Taurus 2110, with Taurus XL used for launching OCO.

Taurus XL, which debuted on May 20, 2004, uses a Thiokol Castor 120 driven solid motor, an Orion 50SXL as the second stage, an Orion 50XL as the third stage and a Alliant Tech Orion 38 solid as the final stage. It is capable to placing a 1363 kg payload into low-Earth orbit. OCO will be sent to a polar orbit of 438 miles.

Orbital Sciences is also as developing Taurus II, a medium-lift design that utilizes a liquid fuel first stage. This vehicle is at the center of the company’s CRS (Commercial Resupply Services) contract.

Orbital Sciences also built the OCO spacecraft, which will make the first space-based measurements of atmospheric carbon dioxide (CO2), a well-known as a greenhouse gas.

The mission will be conducted under the management of NASA’s Earth System Science Pathfinder (ESSP) program during the spacecraft’s 24 month lifetime.

Each carbon dioxide molecule includes one carbon atom (C) sandwiched between two oxygen (O) atoms, forming a linear molecule, with the structure O=C=O, which is where the spacecraft gained its name.

Scientists will analyze OCO data to improve our understanding of the natural processes and human activities that regulate the abundance and distribution of this important greenhouse gas. This improved understanding will enable more reliable forecasts of future changes in the abundance and distribution of CO2 in the atmosphere and the effect that these changes may have on the Earth’s climate.

The measurements will be combined with data from ground stations, aircraft and other satellites to help answer questions about the processes that regulate atmospheric carbon dioxide and its role in Earth’s climate and carbon cycle.

“It’s critical that we understand the processes controlling carbon dioxide in our atmosphere today so we can predict how fast it will build up in the future and how quickly we’ll have to adapt to climate change caused by carbon dioxide build-up,” said David Crisp, principal investigator for the Orbiting Carbon Observatory at NASA’s Jet Propulsion Laboratory.

The Observatory will fly in loose formation with a series of other Earth orbiting satellites known as the Earth Observing System Afternoon Constellation, or the A-train. This coordinated flight formation will enable researchers to correlate OCO data with data acquired by other instruments on Earth observing spacecraft.

“OCO’s carbon dioxide measurements will be pivotal in advancing our knowledge of virtually all Earth system land, atmosphere, and ocean processes,” added Michael Freilich, director of NASA’s Earth Science Division in Washington. “They will play crucial roles in refining our knowledge of climate forcings and Earth’s response processes.”

The Orbiting Carbon Observatory’s three high-resolution spectrometers spread reflected sunlight into its various colors like a prism. Each spectrometer focuses on a different, narrow color range, detecting light with the specific colors absorbed by carbon dioxide and molecular oxygen.

The less carbon dioxide present in the atmosphere, the more light the spectrometers detect. By analyzing the amount of light, scientists can determine relative concentrations of these chemicals. The data will then be input into computer models of the global atmosphere to quantify carbon dioxide sources and sinks.