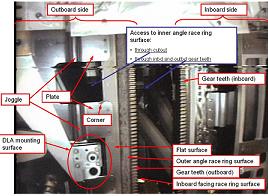 The work conducted by the STS-126 on the International Space Station’s Solar Alpha Rotary Joints (SARJs) continues to reap rewards, following the latest positive status update to NASA managers. Meanwhile, Flight Directors have given a status overview of the work required to ensure they are ready for a potential launch of STS-119 in March.

NASA have continued to build plans to solve the SARJ issue on the Station – centering around an ambitious plan to replace the race ring on the starboard hardware that rotates solar arrays to track the sun, by installing SARJ XL on one of the 2010 shuttle flights.

Several flights – depending on requirements – will have the additional EVA tasks of cleaning and lubing the starboard SARJ. However, downstream plans continue to be modified, via the positive results gained after STS-126’s activities.

“After the STS-126 crew cleaned and lubricated the stbd SARJ, even though the race ring is damaged, the current required to rotate the joint was much lower than previously required,” noted an 8th Floor News update to MOD staff, acquired by L2.

“Because of this situation, there is higher confidence that this inboard race ring will be available for future operations.”

And future operations via use of the inner race ring on the SARJ, is deemed as capable of operation throughout the lifetime of the Station, in tandem with a mitigation plan involving the outer race ring.

“Lifetime analyses indicate that the inner race ring structure is good for the life of the Program. However, since the ring is damaged and may contribute to a somewhat higher degradation of the rolling equipment attached to the ring.

“The Program is seriously considering modifying the Stbd SARJ to provide a full redundant option where the joint can be rotated using the outer race ring.

“This would open up the option to operate the Stbd SARJ using the outboard race ring with the inboard race ring used as backup. This would require moving both of the Rotary Joint Motor Controllers (RJMC) outboard of the rotating joint.”

To enable this plan, an EVA task would be required on a future flight – or during an Expedition EVA – in order to create an installation location for the a second RJMC.

“The proposed solution includes developing two new interface boxes which would be installed at the current RJMC inboard location,” added the update. “This would provide a means for the S3 MDM to acquire joint resolver data from the inside of the rotary joint.”

It is not yet know if this would negate the need to fly SARJ XL to the station.

Meanwhile, when next orbiter due to arrive at the orbital outpost remains in the balance, as managers and engineers push forward on creating flight rationale for the Flow Control Valves (FCVs) in order to launch around March 12, just a few days prior to the Soyuz cut out.

Confidence is high that an engineering solution via testing will result in flight rationale being accepted at next month’s latest Flight Readiness Review (FRR). However, all elements that support the mission are having to work along the fluctuating timeline.

“As you all know, the Space Shuttle Program and our partners are working hard to develop a plan to go forward toward a launch,” noted Kwatsi Alibaruho from the Flight Director Office to MOD staff.

“That plan is coming together nicely, and our Shuttle Program Manager has been doing a great job articulating the status of the development of that plan to the community and to management as we progress.

“Officially, a launch date has not been set for STS-119 / ISS-15A; however, it’s obvious from the press releases and other information that folks are working toward a March 12, 2009 launch target.

“There is still a great deal of open work to close out before we can fix a launch target that everyone has high confidence in. There will be management reviews next week to assess our capability to meet March 12th or subsequent targets.

“Because so much of our work requires a significant lead time of several days to complete, we must be prepared to support our nearest possible launch target.”

Additional work required for the latest NET (No Earlier Than) launch date includes a switch from a Descending to Ascending Node landing.

The Ascending node entry path is usually preferred as it involves the orbiter return to track mainly over water, whereas a descending node entries occur much later in the flight day, and crosses over the heartland of the United States.

“I know there are also ISS Power, Thermal, and Attitude analyses that must begin at this time. Please proceed.

“In summary, that work that we must do to prepare for a 3/12/09 launch, we should do. If there is any work that can be deferred until the management reviews next week, I recommend you defer.”