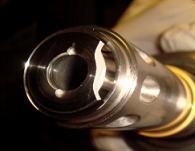 Another delay to STS-119’s NET (No Earlier Than) launch date is deemed a possible outcome of Friday’s Flight Readiness Review (FRR), with test results – some negative – still arriving on manager’s desks on Thursday.

The main issue relates to more data being required on how a broken piece of Flow Control Valve (FCV) may behave under high flow conditions, when it impacts the first downstream 90 degree bend in the orbiter’s plumbing.

Sources were reporting positive progress on the test data required for flight rationale required prior to STS-119 launching – currently a NET of February 27.

However, by Thursday morning, at least two managers due to meet at the FRR at the Kennedy Space Center (KSC) were telling their departments they would be voting “No Go” at the meeting, citing the impact test results on the 90 degree “elbow” in the Main Propulsion System (MPS).

As outlined in previous FCV articles, the issue first arose on STS-126, when part of the poppet on the valve broke away. Endeavour managed to continue her ride into orbit without issue. Marking, but no damage, was found inside Endeavour’s plumbing during post flight investigations.

In order to create flight rationale, managers have been looking through data and test results based on a more serious liberation, and the probability of such an incident occurring.

Via the collection of 19 presentations – available on L2 – outlining the FCV issue, one document looked at the potential LOV/C (Loss Of Vehicle/Crew) threat, focusing on the probability the External Tank could be forced to vent during first stage – which would result in mission failure due to the ET catching fire.

This event would be caused by a severe failure with one of the FCVs, which results in the hydrogen vent-valve opening on the ET. Such a severe failure risks the ET from over pressurizing above 35psia, with the other two FCVs unable to cope.

With the tank spewing LH2, its reaction to the atmosphere and the firing Space Shuttle Main Engines (SSME) would set the ET’s Thermal Protection System (TPS) foam alight, resulting in failure. However, this can only occur during first stage flight, providing the FCV failure happened immediately after launch.

Such a major failure of tank pressurization management – which could only be caused by one of the FCV’s poppet heads being entirely ripped off – is deemed to be as low a risk as 1 flight in ever 1,300 (mean).

“The venting story also has not changed much, but the community has definitely become more comfortable with this hazard because there is a very low likelihood of venting,” noted a summary of the associated presentations. “The consequences of venting are very bad and everyone agrees with that assertion.

“However, two key summary points stick out: It takes a single poppet debris size two times bigger (than STS-126’s event) to cause venting and the window of exposure ends in the (early) seconds of the flight.

As to the risks outlined on the potential size of a liberation from the FCV, a maximum of half of the poppet lip – or 180 degrees of the circumference – is the current thinking. However, this is one area engineers are working on correct analytical models, given there are disagreements on the findings – and thus a problem for approving flight rationale.

“The bottom line from the analysis is that the stress concentration could grow a crack around the circumference of the poppet and create a break somewhere in between 140 deg to 180 deg,” noted the summary of specific presentation dedicated to this area of concern – which also outlined the root cause.

“The rationale for this is based on the fact that an analytical method would have predicted a 140 to 180 deg poppet debris piece for STS-126, yet it ended up at 87 deg. This work has obvious uncertainty in it and the community does not yet know how to interpret his conclusions and some members of the community do not agree with this conclusion.” 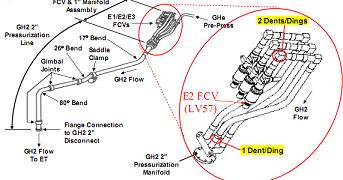 The key area of concern at present is how much damage a serious liberation could cause to the “guts” of an orbiter. Specifically, the latest concern on Thursday was noted as relating to an impact from a large – larger than during STS-126 – piece of FCV damaging to the plumbing inside the MPS.

Again, risk is low for all threats, given the likelihood is this event will not occur again, following the focused inspection of the valves installed into Discovery. For flight rationale, understanding is the key word.

The main impact concern relates to the first elbow immediately after the FCV in the MPS, which has been undergoing testing at the White Sands Test Facility and other centers.

“The community has been trying to analytically determine the velocities of a liberated poppet will attain inside of the orbiter and ET repressurization lines so that this data can be used to anchor impact tests,” the summary continued. 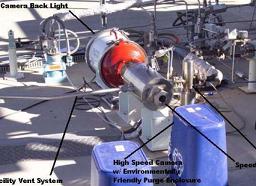 “They acknowledge there is some over-conservatism in the initial 2 bends in the line immediately downstream of the FCV and they are working to better bound their answers. The results for the downstream 1 inch and 2 inch line within the orbiter is still in work, but the Aero Panel experts are confident they will have credible results soon.

“The ET velocities are available, but Stennis impact test data will be used to refine that data. The bottom line is that the team needs more time to better refine the information across all elements (orbiter and ET). Some discussion as to what parameter is more significant – mass or velocity – and the answer is both can have significant effects on the impact answer.

“The mass flow rate will increase significantly for large pieces of poppet lip that has liberated and the flow will not choke completely. The initial assumption thus far has been anchored to STS-126 debris sizes and a lot of iteration would be required to assess larger poppet pieces.”

Testing has continued at various NASA centers throughout the risk, with presentations still being created as of Thursday night. If more time is required for testing, the FRR will be able to move the NET date to the right without any impacts on the next flight – STS-125.