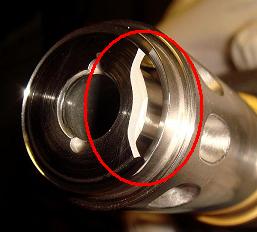 STS-119’s latest NET (No Earlier Than) launch target of February 22 remains the target, as engineers work through the Flow Control Valve (FCV) issue with the goal of approving flight rationale. Testing and documentation are being ramped up ahead of Friday’s special PRCB (Program Requirements Control Board) meeting.

Processing at Pad 39A is now holding for the outcome of the latest meetings, which will hopefully lead to a Delta Flight Readiness Review (FRR) on February 18. That in turn will decide whether to proceed towards the latest refined launch target of February 22.

“Sent out note last week announcing the schedule for STS-119 – PRCB this week on February 13; targeting an FRR next week on February 18; and launch NET February 22, obviously pending success as we go along,” noted information on L2. “When it firms up, we will send out an official letter with the actual dates and times.

“(Shuttle manager) John Shannon added that would be a Special PRCB on Friday just to talk Flow Control Valves (FCVs). Will have the normally scheduled PRCB on Thursday to do org clean-up items that we need to get to before flight.”

With the 22nd used as a planning date, processing flow realignments have set the preparations for the additional loading of Discovery’s Forward Reaction Control System tanks – called for the reboost the orbiter will carry out for the International Space Station (ISS), and final ordinance installation.

“Are also in the process of re-laying out their schedule, the overall plan to get to the February 22 launch date. Flight Design folks are still working to look at increasing forward RCS load; will have that answer no later than Wednesday morning.”

In order to launch this month, engineers are conducting a series of tests – along with the evaluation of risk assessments – which will ultimately result in the flight rationale required by the FRR.

Tests and evaluations are continuing this week at no less than six facilities, involving NASA and numerous contractors relating to the systems linked with the FCVs.

“On FCV testing, did get 20 runs off,” noted the latest on testing at the Stennis Space Center (SSC) on the Space Shuttle Main Engines (SSMEs), as efforts continue on understanding the behavior of a liberated part of the valve, following the loss of an area of FCV poppet during STS-126. Efforts include attempts to film a liberation event.

“Two were activation runs, trying to figure out how to operate the system and to be able to catch the particle as it went by the camera. Think we’ve been successful in doing that. It is a matter of data review to make sure we actually captured the particle going by the camera. We got velocities. Will install a camera on the downstream side of the elbow and will hopefully be able to get a shot at upstream and downstream velocities.”

Leak checks on the SSME systems have now started, which will work on ensuring such a liberation has not caused a leak in the two inch tubing that the FCVs are associated with.

Post flight inspections on Endeavour show the liberation did impact several areas of tubing, but only left “marks” where it impacted. It is deemed as unlikely that a liberated piece of material would be able to travel far, thanks to an “elbow” bend in the system, and the protection for pre-valve screens that are used to capture material inside the lines and plumbing inside the MPS and the ET.

Also included in the status update were NASA’s Orbiter Project at the Johnson Space Center (JSC), who have been at the center of working the FCV issue since the anomaly on STS-126.

While Test Readiness Reviews are set up for the benefit of the PRCB and FRR meetings, updated are being noted on the concern relating to marking that was observed on some of the valves, which – it is feared – could be crack indications, which would point to a weakness in the valves.

The markings, believed to be machining grooves – are being polished down to check for any obscured cracks. This is the key issue surrounding the potential need to standdown for around two months in order to allow for a redesign of the valves, though sources are confident this will not be required.

“Had a Test Readiness Review for the two Special tests at SSC and WSTF, and gave them both a ‘go’ to proceed with testing.”

“People need to remember that we may clear things via analysis, not just via test. The primarily purpose of WSTF testing is to anchor velocities coming out of FCV and through the first 90 degree bend to see if the modeling ‘meshes up’. We have some CFD (Computational Fluid Dynamics) work to try and validate some of that flow velocity.

“We got into polishing 361 poppets over the weekend. Did have a few crack indications on 361s with dye penetrant tests. The real purpose of this polishing is to see what kind of cracks we could detect; if we do a finer polish, we could remove some of the machining marks and do a more thorough dye penetrant inspection and another sim. 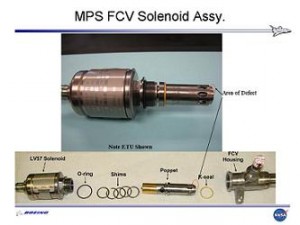 “We have a twelve-flight poppet from our current assets, and a ten-flight poppet. If we know we cannot remove very much material, we go look at those and see if we have any cracks. We will also study the one that failed on OV-105. We cut the back of that off to make an example and didn’t see any cracks there, so it will be very important as we go forward to understand the cracks in the complement of our flight poppet.

“Have a test plan we are working on for that. On the GOX poppet, with eleven flights, we did do dye penetrant on it at Huntington Beach over the weekend and did not find any indications. Would characterize that material as more difficult to work with; it’s a softer material so there are more machining marks.”

Another FCV risk relates to the potential of venting from the External Tank during first stage flight, which may cause the ET’s Thermal Protection System (TPS) foam to catch fire. Assessments are continuing.

“ET presented their assessment of H2 fire and what they had on O2. They were going to do some testing over the weekend to get a better understanding on how a 100 percent O2 environment burns with foam,” noted NASA Systems Engineering and Integration (SE&I).

“Assigned an action to put together a task to better understand the H2 fire. They will come back with a schedule in the next few weeks and we will decide if we really want to do that or not.”

The combination of the testing and evaluation data will be overviewed in steps during this week, which opened with a management tag-up on Monday, to be followed by another on Wednesday. Friday’s Special PRCB will be the key for knowing if they are in a position to press forward towards the Delta FRR that will then decide on if February 22 is viable.

“We have a lot of work in front of us. The team has done a really nice job of laying out what is required to get to flight. Now we have some data to collect, and think about that data once we get it. If we think we have sufficient data, then we will press forward; if not, we will go collect more data.”

Mr Shannon again repeated his backing for the teams working the issue, and requested they take their time to ensure the confidence is in place for safe flight. Such comments are commonplace within today’s shuttle management, where any engineer, at any level, can gain an audience with the very top of the SSP if he/she has any concerns.

“A lot of work is going on. Keep doing what you’re doing. Watch the team; at least half the team works the entire weekend. Your reward for working so hard will be a long 14-day mission,” Mr Shannon wrote.

“Let’s make sure that when we step into that mission, we are ready to go to handle any issues that might come up. If we start pushing the team too much, we will make a mistake. That has the potential for problems, so pay attention to the team.

“As Senior Managers, we have to meter that and make sure we are not putting anybody in a bad situation. Keep an eye on it and if you think we are hitting a spot where we shouldn’t, then come talk to me.”