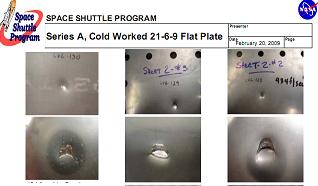 Shuttle managers have concluded the Delta Flight Readiness Review (FRR) – one of the longest in shuttle history – by failing to approve flight rationale due to concerns with the Flow Control Valves (FCVs). No launch date has been set, but February 27 is no longer the target. Teams will meet again on Wednesday to ensure full confidence in approving the flight rationale.

The main topic was – as expected – the Flow Control Valve (FCV) issue, with most of the morning and all of the afternoon and evening sessions dedicated to root cause, risks and testing status.

The FRR opened with a few outlines of recent note, such as MMOD (Micrometeoroid Orbital Debris) updates, and the subsequent increased risk following the collision of two satellites in orbit, along with a full overview of the recent Reboost and Off Nominal Soyuz issues – the latter gaining a superb US and Russian written overview presentation.

For the FCV element of the FRR, a positive note was outlined from the start, with the powerful SSP (Space Shuttle Program) documenting their stance as “go” for flight.

However, the meeting had several participants in attendance with the intention to note dissent – a regular and welcome element of shuttle meetings – with regards to proceeding towards a launch on the 27th, mainly citing test data that was classed either as negative or inconclusive.

As a result, no firm launch date has yet been decided on, although managers are expected to have a good understanding of the forward plan on Wednesday.

“I’ve been in a lot of FRRs and I’ve never been involved with one – such as this – that has gone to such technical depths,” noted shuttle manager John Shannon. “I’m very proud of the team and we’ll get it right.”

The key area of interest during the latter part of the week related to potential damage to the plumbing inside the orbiter’s Main Propulsion System, with testing showing that “Gouging and Tearing” was observed on plates used to mimic an impact from various sizes of liberated poppets (all larger than the STS-126 event) at speeds of around 425 fps.

The specific area of concern relates to the 90 degree elbow bend, downstream of the valves, being impacted during high flow conditions.

JSC Engineering, a conservative engineering group based in Houston, noted on their presentation that “understanding” on the potential impacts were close to being finalized, but remained a concern.

“Damage assessment to downstream parts from poppet debris analysis is nearing conclusion but still remains a concern,” according to their pages in the 158 Orbiter Project Office (OPO) presentation to the FRR.

The other concerns mainly relate to the venting of the External Tank during the opening stage of flight, which has the risk of causing a LOV/C (Loss Of Vehicle/Crew) scenario. However, such a failure – which would risk the ET catching fire – is deemed highly unlikely.

Other risk, such as the ET venting early and recontacting with the orbiter after ET sep, are also deemed highly unlikely.

A full outline of several new presentations dated February 22, and acquired by L2, will be published in upcoming articles. 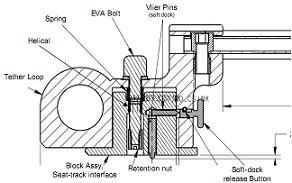 An item of interest that was cleared by the FRR ahead of the meeting related to the On-Orbit Installed Handrails (OIHs), which are EVA-certified, crew-rated handrails, used for safety tethering, translating, and worksite stabilization on ISS

OIHs are installed into “seat track” on ISS, and despite their name, OIHs can be installed on orbit or on the ground, based on their certification covers ground installation. This issue was first noted on the Shuttle Stand-up/Integration report a week ago.

“On-orbit installed handrails may have an issue regarding cycle life. During testing, the rails failed load testing. (The rails have a locking helical coil to protect for launch loads),” noted the Stand-up. “More testing will be done this week in an attempt to clear the rails for STS-119/15A. This will be an FRR topic if it cannot be cleared.”

However, as listed in one of today’s FRR documents, the issue was cleared for STS-119, but not before providing additional information into the initial concern.

“OIH EVA bolt head running torque requirement is that running torque should be at least 3.5 in-lbs. Spec for the self-locking helical insert is 3.5 – 30 in-lbs. Serves as a secondary locking feature to prevent bolt back out,” noted the FRR presentation. 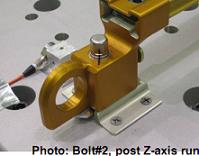 The related concerns were outlined as: “Primary concern was that ground installed OIHs may have lost pre-load of the EVA Bolt, and potentially backed out unknown number of turns due to launch vibration.

“If this is the case, the OIH cannot be qualified to sustain the EVA crew induced translation loads or safety tether load requirements. Additional concern of releasing the OIH was determined to be unlikely, because it would require the following: Both EVA bolts would need to back off (bolts are captive).

“The soft dock mechanism on each OIH post/stanchion would need fail / be released (button force is 1 – 10 lbs to release soft dock). 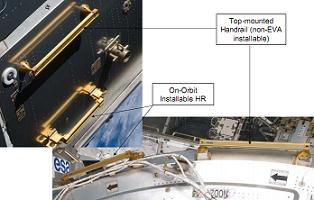 In clearing the issue, the presentation noted that on orbit OIHs are automatically safe for use, via their level of torquing during qualification, in turn clearing the majority of handrails on the International Space Station (ISS).

“Any OIH installed on orbit (not exposed to Launch vibration loading) is considered acceptable because it was torqued to 60 in-lbs which was used in Qualification. This cleared all Columbus OIHs, most S0 OIHs, and a small percentage of OIHs on the airlock, node 1, node 2, and the Lab,” added the overview.

“For OIHs installed on the ground, vibe test needed to be performed under actual flown conditions. Minimum, lower than specification running torque. Preloaded to 25 in-lbs, value determined as worst case based upon investigation of ground installed OIH bolt torques

As a result of the findings, the OIH handrail was determined, by test, to be capable of sustaining launch vibration, without losing preload, when installed with a minimum preload of 25 in-lb (worst case) and a degraded secondary locking feature.

Several articles will follow, based on the Delta FRR presentations.