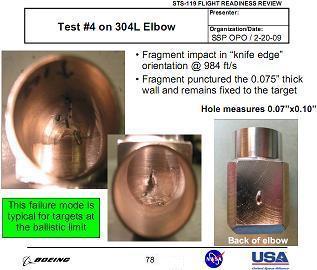 A launch of STS-119 prior to the Soyuz cut out in mid March remains on the cards, as managers prepare to meet on Wednesday for a launch date discussion. The meeting will also outline a plan to “beef up” the most vulnerable area of the MPS (Main Propulsion System) plumbing, which would reduce risk associating with launching Discovery without redesigned Flow Control Valves (FCVs).

“The FRR was a good effort by the team. Think we had most of the data we needed, it was just difficult for the broader team who had not been looking at it on a daily basis to pull the rationale out,” noted shuttle manager John Shannon on the L2 acquired Shuttle Stand-up/Integration report. “We will regroup.”

Meetings have been taking place on Monday and Tuesday, in order to create a forward plan ahead of Wednesday’s Agency level get-together between FRR level managers. By the time this meeting takes place, it is hoped all engineering departments will be fully briefed on the testing data and the forward plan towards flight rationale.

“When we have that (full documentation), we will make sure that it is vetted completely through the Engineering, Safety, and Program communities, that we have agreement before we march off and execute,” added Mr Shannon. “One of the things that has been difficult has been for folks that aren’t close to it to keep up with all the things that have been going on.

“We will have a very clear roadmap of exactly how we build the flight rationale. As we go through the process of building that rationale, we will have the day-by-day schedule and see where that ends up with a launch date.”

Notes on the favored forward plan, one which has “confidence of launching in March”, involves a two fold approach of “cherry picking” the best valves available to be replaced into Discovery, along with added protection to the most vulnerable area of Discovery’s MPS lines, via test results that have fired particles of liberated valves at mock-ups of the MPS plumbing.

Processing notes late on Tuesday confirmed engineers are now preparing to remove Discovery’s FCVs – which were themselves replacements during the early pad flow – to be replaced by valves that have flown on several missions.

It is understood these valves have shown no signs of cracking, thus are deemed as “good” valves for a least STS-119, given they are less likely to liberate parts of the poppet lip, than newer, less predictable valves.

The eventual plan is to redesign the valves – most likely involving a stronger metal that is less likely to crack – for missions to be flown later in the manifest.

Beefing up the downstream line – with the main threat area associated with the 90 degree elbow immediately downstream of the valves – will involve a “doubler” being installed around the elbow.

This should provide the additional protection required against a breach in the line, should a liberation from the FCV smash against the bend, which has been shown – via impact testing – to have some negative outcomes.

“The team is putting a concept to build a doubler that could be installed on the end of the suspect elbows on the MPS lines that are directly behind the flow control valve,” noted processing information on L2 on Tuesday.

“Currently the concept uses a plate with an o-ring that is mechanically held in place with fastener from the opposite flange. We are awaiting further information to further the design such as how thick the material will need to be to absorb an impact and how much mass can be installed on the lines.”

Teams have been working on this idea during the week, and is currently the favoured approach. However, it still needs to win the approval of the FRR members, in order to become a positive factor in the building the required flight rationale.

“We are going to be much more rigorous in the approach that we take, and make sure that the entire community’s concerns are heard throughout,” added Mr Shannon. “And wherever that leads us from a launch date standpoint, that is where we will be.

“When we go fly, we want the entire team to be confident and support the actions that we are taking. That’s the way we are going to approach it.

“Otherwise, the FRR went really well and we got everything cleared off the plates. So, I think that once we have this plan, we can get the agreement from everyone like I fully expect to, that it will be smooth sailing to our STS-119 launch date.”

Currently, Discovery is holding at a pad flow of five days to launch. Latest estimates on a potential NET (No Earlier Than) launch date is March 7, which will give STS-119 a launch window of around a week.

Should Discovery fail to launch within the window, or if flight rationale is not gained in time to launch in March, STS-119 will move to a NET of around April 7, once the Soyuz cut out restriction with the International Space Station (ISS) clears.