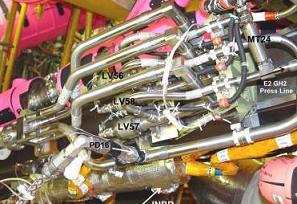 The need for additional time for the impact test data review – one of the threats associated with the Flow Control Valve (FCV) issue – has moved STS-119 to NET (No Earlier Than) February 22. Friday’s decision also noted a worst case scenario that would involve a two month delay.

As recently noted, the initial decision to delay STS-119 from February 12 to February 19 was just an initial estimate, with further delays possible to the re-aligned February 22 NET.

Currently, the realignment has resulted in next Tuesday’s special PRCB (Program Requirements Control Board) meeting being delayed to Friday, February 13 – while the Delta FRR (Flight Readiness Review) will now take place on February 18.

The latest delay of three days relates to additional time required for completing the impact test data review, which will be part of the eventual flight rationale for the FCVs.

The impact testing will study the results of liberations from the FCVs on the internal workings of the Main Propulsion System, along the lines to the External Tank.

Providing the results show the threat does not carry additional danger to the vehicle during ascent, engineers will be able to use the data to build part of the flight rationale.

The other work taking place for flight rationale relates to conditions where a failure of the FCVs cause venting from the ET during first stage flight. The worst case scenario associated with such a condition is classed as a potential fire hazard to the Thermal Protection System (TPS) foam on the tank.

It is possible that flight rationale will still be absent by the time managers meet to overview the impact test data, due to a potential problem with the analysis method of looking for cracks in the poppets of the FCVs. It was a crack in a FCV on STS-126 that caused the fault in the valve.

“Recall the new data at yesterday’s telecon that shows we could have an FCV poppet crack that is obscured by the machining grooves,” noted MOD manager Paul Hill in a memo acquired by L2. “This invalidates part of the flight rationale that was coming together.

“We now have a much higher line on impact test results since we can not assume a low probability of poppet debris release simply because we didn’t see cracks in NDE (Non Destructive Evaluation). The engineering community is gaining confidence that 90 degrees bounds the release size, but that’s still not a done deal.

“SSP deferred Tuesday’s special PRCB to Friday 2/13 to give time for impact test data review, which will come in late next week. SSP’s goal still is to close all issues before an FRR, which is absolutely the right thing to do.

“Expect an earliest launch now on Sun 2/22 with a delta FRR on 2/18. SSP hasn’t set those dates yet, we’ll see how things go early next week and could slip those dates again before the PRCB.”

Mr Hill went on to note the “worst case” scenario of having to redesign the valve – which would threaten a two month delay to STS-119’s launch date.

“It’s still possible that we’ll come out of the 2/13 PRCB without flight rationale, depending on the impact test results,” he added. “A worst case could require a redesign and maybe a two month slip. However, there are other, lower impact options also. This all hinges on the impact testing and the resultant risk level of the existing poppets.”

“Next week is an important week, that’s for sure.”

Several decisions have been made while that process continues, with managers deciding the required reboost of the International Space Station (ISS) will now be conducted by Discovery.

The January 14 reboost by the engines on the Zvezda service module caused serious vibrations onboard the Station, leading to Russian managers to postpone the reboost required for the arrival of the next Soyuz vehicle. NASA managers have noted no serious damage was sustained by the orbital outpost.

“Further analysis cleared this hardware for strength and life. Reboost cancelled to give more time for Russians to analyze.”

In order to help Discovery carry out the reboost, additional propellant will be loaded into her Forward Reaction Control System (FRCS).

“S0024 Propellant Servicing Run 2 has been scheduled for this weekend,” noted processing information on L2. “This load will provide additional propellant in the FRCS which will be used to boost the ISS during the STS-119 mission.”

It is not yet known if the additional delay of three days to the NET launch date will delay the run, or the final ordinance installation – which has been rescheduled for next Monday.

“S5009 Final Ordnance Installation/Connection will pick up on Monday evening,” added processing information. “S1287 Orbiter Aft Closeouts and S0007 Launch Countdown pre-ops will both pick back up on Tuesday.”

The only issue being worked on Discovery relates to the bent LO2 sense line. If the line needs to be replaced, it is not expected to cause a hit of more than a few days at most on the pad flow.

“MPS (Main Propulsion System)-1826 bent LO2 sense line update: Mass spec leak checks will be performed on the line today (Friday). These will determine if the line must be replaced or if an MR (Material Review) may be pursued.”