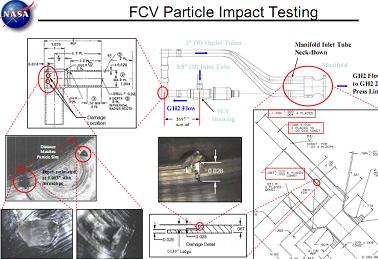 Shuttle Discovery is back into full launch processing, with the pad flow working to the latest NET (No Earlier Than) launch date target of February 27. The processing – which can be backed out of in the event of another Flow Control Valve (FCV) related delay – will also include work on one of Discovery’s windows.

With managers set to meet on Friday at the Delta Flight Readiness Review (FRR) to overview the latest work towards flight rationale for the FCVs, no firm launch date has yet been set. Regardless, engineers working with STS-119 at the pad need to “continue to work toward a targeted launch date of no earlier than 2/27/09.”

An additional item of interest – relating to the fleet’s windows on the flight deck – has resulted in a minor addition to the pad flow, which will take five shifts to complete.

As noted in a previous processing report, a concern with the torque strengths on a few of Endeavour’s windows required evaluations across the fleet. As a result, one of Discovery’s windows will require operations to re-torque its fasteners.

“The PRCB (Program Requirements Control Board) decided yesterday (Tuesday) to re-torque the Window 3 fasteners,” added processing information. “Structures and TPS (Thermal Protection System) engineering are estimating approximately five shifts of work, which is being targeted prior to S0071.

“The team is not anticipating this work to impact any milestones, including S0007, assuming there is no collateral TPS or window damage to evaluate/repair.”

The key topic for STS-119, and the fleet as a whole, remains the requirement to gain flight rationale for the FCVs. A full overview of the main areas of concern/risk will be published on this site on Thursday, based on content contained within 19 expansive presentations available on L2.

Summarizing the state of play, engineers are looking into the root cause of why – as observed on STS-126 – a piece of the poppet on the valve managed to liberate.

The liberation is caused by tiny cracks in the valve, believed to be related to high cycle fatigue, and an acoustic environment which is coupling with the structural mode of the poppet.

While the entire root cause may not be “fully” understood by the time STS-119 flies, flight rationale will be based on “risk assessment” – which relates to ensuring a full understanding of potential LOV/C (Loss Of Vehicle/Crew) and the “probability” of such an outcome.

The main concern is associated with the External Tank venting due to a lack of pressure management during the first 120 seconds of launch (first stage) via a serious FCV failure, would result in the ET catching fire, and LOV/C. However, the probability of such an incident is classed as a “mean” of 1 in 1,300.

Shuttles fly all the time with multiple LOV/C risks. However, they are able to fly due to the low probability associated with the risks of a failure.

The other main risk associated with a liberation of part of the FCV – the outcome of the valve debris impacting and causing a breach in the downstream line/plumbing – has also resulted in extensive testing.

“Excellent progress has been made since the Agency Flight Readiness Review (FRR) on February 3rd and the Agency Delta FRR is scheduled for 2/20 with launch NET 2/27.” summarized the L2 acquired 8th Floor News this week – which is weekly memo to shuttle managers.

“The effort to determine whether there is adequate flight rationale to fly as is for STS-119 has focused on bounding the size of the poppet lip that can liberate, assessing the risks associated with a poppet failure, and investigating whether there is common cause on the GO2 side. Work continues on refining the bounding particle size.

“The venting risk is considered low due to the small window of exposure and fracture size required to result in venting during the region of concern. Significant progress has been made with the particle impact testing. Although some negative margins were computed, the testing was based on conservative particle velocities.

“Additional analysis is being performed to understand and possibly reduce the conservatism before conclusions can be drawn from the impact testing. Because of the differences between the GO2 and GH2 valve/poppet design (three of each), the same issue with poppet failure on the GO2 side is not considered credible.

“The team is doing a great job approaching this issue in a thorough and methodical manner. Stay patient and remain focused! We’ll get there!”