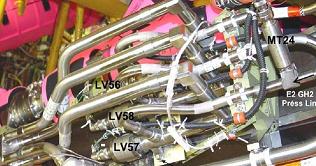 The major effort to facilitate a March launch for shuttle Discovery is continuing on a seven day week, as vendor Vacco prepare to ship the three replacement Flow Control Valves (FCVs) to the Kennedy Space Center (KSC) by Monday. Flight rationale is also being built ahead of next week’s crucial meetings.

The effort involves almost every element of the shuttle program, with next week’s meetings – that include a Special PRCB (Program Requirements Control Board) and another Delta Flight Readiness Review (FRR).

Out at Pad 39A, work was completed on removing the three FCVs, all of which have since been sent back to Vacco. Initially one valve was set to remain at KSC as a spare, before that decision was reversed.

The three replacement valves – which have previously flown between four of five flights with Discovery – are expected at KSC as soon as Monday. These valves are deemed as cherry picked, given their faultless flight history.

“Vacco is holding on the March 2 ship date for the FCVs with four and five flights previous use for OV-103,” noted KSC Logistics. “The vendor will try to ship these by March 1 if possible.”

The second effort that is expected to take place on Discovery later next week is the installation of a doubler on the most susceptible area of the vehicle’s MPS (Main Propulsion System) plumbing – the 90 degree elbow immediately downstream of the FCVs, which is deemed a risk of being punctured by a liberated piece from a valve.

Engineers have produced two back-plate doublers, each of a different thickness, which have been undergoing testing late in the week. One mock-up doubler plate underwent fit checks on Discovery on Wednesday.

This protection would be deemed as a failsafe, as only a large – over twice the liberation seen on STS-126 – would be capable of punching a downstream line.

“Doubler concept work is progressing and a preliminary mock-up has been built. Following an installation fit-check on the vehicle, several design modifications were made,” noted the Engineering notes on L2. “The O-ring has been eliminated from the concept, and the doubler was honed out to allow the elbow to fit more snugly.

“Both the backing plate and the plate into which the fasteners screw-in have also been beefed-up. The final plan and certification will be reviewed on March 3. The final doubler design concept will be tested using heightened velocities. An improvised shake-test will also be used to provide additional reassurance for the g-load and the vibratory load.

“(Shuttle Manager) John Shannon congratulated USA (United Space Alliance)-Logistics for all of the outstanding machining work performed to date and expressed his appreciation for the quick turnaround on design concepts and test fixtures. It has been some really good work.

In tandem with the doubler work, Space Shuttle Main Engine (SSME) engineers are working at the Stennis Space Center (SSC) on the impact testing such a modification would be tasked with protecting against.

This effort will continue over the next few days.

The final element of flight rationale is based around root cause and risk analysis. Exactly what causes a FCV poppet to liberate – as it did on STS-126 – is close to being understood, with the focus on what causes the tiny cracks the form on the valve, and what size of liberation the cracks threaten.

“Information being developed on the cracks in the FCV poppets is helping to better develop our understanding. This data is being evaluated by many experts in an attempt to correlate crack growth to numbers-of-flights,” noted JSC Engineering.

“The major goal is to develop a means to determine how to gage fragment size that may result from cracking.

“There has been discussion on performing eddy-current testing of the poppets. But with two of the four-flight poppets already assembled and the five-flight item to be done, there is reluctance to continue tearing down the FCVs.

“The team at Vacco is concerned about exceeding the design parameters for tearing down the FCVs, especially since the eddy-current testing does not have 100 percent confidence among the community. This issue will be discussed further in an off-line forum.” 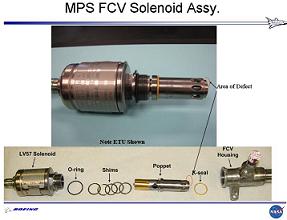 Testing old, flown, FCVs for gaining data on when the cracks form remains a challenge, although engineers are working off conservative estimations of risk, which will be used as a buffer zone in flight rationale risk assessments.

“Finding cracks in the two poppets (used during testing) may change the distribution selected for probability testing. The most conservative was chosen, based on random flight life. But with the wear out theory, including a 12-flight item in the testing may skew the results.

“Two tests, one using a random failure rate and the other using a wear out failure rate may be run to determine the mean probability of crack formation.

“Statisticians are now assessing this issue, to support OPO (Orbiter Project Office). Both the 361 and 1301 poppets will be studied. One three-flight 361 poppet has been inspected and shows no cracks. Several more of this type will be inspected.

“Two more valves are at Vacco and have been assembled. Another went through fit-check yesterday with no issues. This unit will be assembled and put through testing as well.”

Meetings are taking place over the weekend, in order to discuss the latest results gained from testing. The goal is to have documented findings presented to the Special PRCB next week, which will finalize the findings to be discussed by the FRR.

“A Loads Panel will review the Orbiter capability inputs Saturday, February 28 and with OPO on Sunday, March 1, prior to being seen at the SICB (System Integration Control Board) on March 2 “