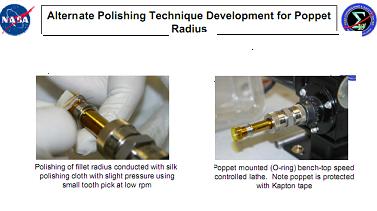 The latest target for STS-119 is a short launch window, opening March 12, following a meeting between shuttle managers that confirmed the forward plan of replacing Discovery’s three Flow Control Valves (FCVs). A Program Requirements Control Board (PRCB) meeting, followed by a Flight Readiness Review (FRR), will take place early in March to confirm the launch date.

Engineers out at Pad 39A have been removing the valves from Discovery, ahead of their replacement by three valves that are being shipped from contractor/vendor Vacco next week.

“Forward plan on the flow control valves (FCVs): Valves will be removed today and shipped to the vendor for inspection,” noted processing information on L2 on Tuesday. “One Valve may be kept at KSC as a back-up. The replacement valves will be installed after they arrive in early March, followed by leak checks and retest.”

Also noted is the plan to add protection to the most sensitive parts of Discovery’s Main Propulsion System (MPS) lines, downstream of the FCVs, notably the 90 degree elbows, that are in the direct line of fire of an impact, should there be a repeat event of the liberation from a FCV.

“Doubler plates will be installed on two 90 elbows in each line to strengthen them in case debris is liberated from a flow control valve.”

At the Johnson Space Center (JSC), managers met again to finalize their forward plan of approving flight rationale, in time to support a March launch possibility. They concluded by setting a Special PRCB on March 4, to be followed by a Delta FRR two days later.

This plan aligns with a new NET (No Earlier Than) launch date of March 12, which will allow Discovery a couple of launch attempts prior to the Soyuz Cut Out, which is due – pending potential negotiations with the Russians – around that time.

“The plan is to fly the 4/4/5 FCVs since they have fewer flights than those currently on the vehicle (better if fatigue is contributor) and they’ve flown in these locations (flown before and didn’t break so addresses the acoustic/structural mode coupling theory).

“These will not be inspected with the higher fidelity inspections (i.e. they won’t be polished and reinspected) due to concerns with flow balancing.”

Ironically, that means the “5” valve was only recently removed from Discovery shortly after she arrived at the pad, ahead of replacement. This valve will now be reinstalled.

“Two of the valve’s coming off Discovery will be inspected with the higher fidelity inspection on their poppets, the third will likely be held back as a spare. They are pursuing a potential mod to beef up at least the first elbow.”

However, making a March launch is still at the mercy of flight rationale, which is awaiting full results of impact testing on the key areas of the MPS downstream of the FCVs. However, this is expected to be completed in time for the Special PRCB or at least the FRR.

“Particle impact testing, Dyna analysis, and Monte Carlo factoring in variability in the particle velocity, particle size, and particle orientation be completed in time to review next week – this is the key piece of the flight rationale,” added the memo.

Should the testing find areas of concern, or if members of the FRR remain uncomfortable with the findings, STS-119 will be delayed until at least April.

Back at KSC, Discovery is continuing to be prepared for a potential launch in March, pending FRR approval, holding at a pad flow that requires five days to process towards a launch date..

“GH2 blank off plates will be installed today in preparation for leak checks and dew point and conditioning,” added Tuesday processing information.