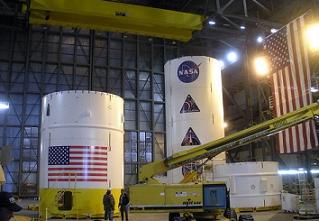 With the Hubble mission still tracking a May launch date, the STS-125 stack – consisting of External Tank ET-130 and the twin Solid Rocket Boosters (SRBs) – will exit High Bay 1 (HB-1) Vehicle Assembly Building (VAB) on Tuesday morning, before heading back into HB-3. Atlantis herself is undergoing final preparations for rollover, on a date to be determined by the several ongoing evaluations.

The STS-125 stack is vacating HB-1 in order to make way for the stacking of STS-127, which includes the initial requirement of supporting STS-125 as the STS-400 Launch On Need (LON) vehicle.

Atlantis was originally due to launch with ET-127, before rolling back, de-staking, and allowing Discovery to take the stack ahead of STS-119.

Atlantis, over in her Orbiter Processing Facility (OPF-1), used the time between being destacked for several processing get-aheads, which has included a modification to her APU-3 heater system. The orbiter is now undergoing a series of closeouts ahead of rollover to the VAB.

“Payload bay cleaning and inspections in support of the HST payload continue; Payload bay door closure for OPF rollout is planned for Friday.”

The schedule surrounding the HST payload continues to be determined by the arrival of the spare Science Instrument Command and Data Handling (SIC&DH) unit, which is undergoing testing at the Glenn Flight Research Center (GFRC).

The successful completion of the tests taking place on the near-20 year old unit, and its timely arrival at the Kennedy Space Center (KSC), will play a key role in deciding when Atlantis will launch en route to Hubble.

Then it becomes complicated. Firstly, managers have to decide on utilizing either the dual pad or single pad options for STS-125 and the supporting STS-400. This plan will only be approved if the replacement HST hardware arrives on time, and if there are major benefits to Constellation’s use of Pad 39B for Ares I-X.

“As you may know, Gerst held a manifest/launch date meeting with (various departments), not a decision meeting, just a status overview,” noted one associated memo based on the upcoming decisions. “Coming out of that meeting, we have the following “work to” dates to continue: STS-125/HST on 5/12. STS-127/2JA on 6/13.

“This plan protects Ares 1-X still occurring as early as July. By waiting until April 1 on single vs. dual pad decision, this gives Ares more time to continue ground processing to see if they can meet July 11.”

However, while build up of the vehicle in the VAB is ramping up, budget issues are causing problems with the ability for Ares I-X is to launch in July, which would effectively remove the Constellation pressure on accommodating the required turnover of Pad 39B for test flight modifications, and thus the need for the Single Pad option.

Secondly, the fall out from the Flow Control Valve (FCV) evaluations could result in modification work being undertaken on the valves, which might result in a two month delay to STS-119.

Although Discovery’s mission is still favorite to launch in February, such a slip would ultimately knock on to STS-125’s plans for a May launch.

Atlantis will likely require replacement FCVs herself, although that process only takes a matter of a day or two, and can be carried out in the VAB or at the pad if required. However, the forward plan for the fleet is waiting on the ongoing evaluations into risk assessment for the purpose of flight rationale.

“The FCV anomaly has received a great deal of attention since it occurred during the STS-126/ULF2 mission,” noted Mission Management Team co-chair Leroy Cain on the latest Shuttle Stand-up/Integration report on L2. “We will take the time we need to get to the point where we are comfortable to fly. There is a great deal of work being done regarding the FCV.

“If you are not directly involved in working this issue or supporting it, use this time wisely to consider all of the different areas that are necessary for us to fly safely, so we don’t miss anything. The end goal is that we are ready to fly as soon as we reach a satisfactory resolution on the FCV issue.

“Be sure you are keeping an eye on your teams; be sure that they are not getting burned out. We need everyone performing at their peak for this to be a successful mission. Be smart on how you manage your people. There has been great work done so far. Let’s keep it up!”

Atlantis has at least two more missions on her schedule after STS-125, with STS-129 scheduled for November 12, and STS-132 tracking May 13, 2010. Further missions may be added, based on the outcome of the shuttle extension decision this Spring/Summer.