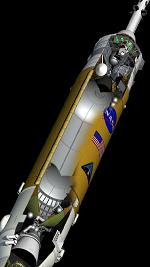 NASA’s Constellation Program (CxP) will conduct a “Content and Schedule” summit meeting in the next few months, after it was evaluated their current schedules are “broken”. The meeting will aim to protect against a slip that is estimated to be as serious as 18 months, or outright cancellation for Ares I. Meanwhile, the push for extending the shuttle program by at least two years is gaining serious momentum.

Constellation’s schedules have been slipping at an alarming rate over the past few years, with the last PMR (Program Milestone Review) confirming a 12 month slip in the IOC (Initial Operational Capability) to March, 2015. This date relates to Orion 2, with Orion 4 – currently classed as the first crew rotation for the International Space Station (ISS), otherwise known as FOC (Full Operational Capability) – launching one year later in March, 2016.

While these dates continue to be the official timeline, internal reviews have found those schedules to be “broken”, with CxP departments across the program reporting they are at “zero percent confidence” for keeping to the March, 2015 (IOC) timeline.

The problem isn’t just funding – which has become problematic for CxP over the last few years – but also what is described as “serious disconnects” between related departments, such as Orion, Ground Ops and Ares.

While continued changes to the designs of Ares and Orion are part of the natural development cycle, issues such as Thrust Oscillation and vehicle performance have come at a price for both schedule and costings, despite fine work from the engineering teams tasked with mitigating the issues.

CxP attempted to protect the schedule and budgetary pressures by offsetting these additional strains by deleting test items – notably on the Upper Stage. However, this only proved to cause further disconnects throughout the program.

Issues with the Ares I Upper Stage engine, J-2X, have also been noted, although no specific information has been made available due to the classified nature of certain vehicle elements.

“Disconnects” have been previously noted on various stages of the vehicle, such as with a key Launch Abort System (LAS) test, cancelled with just 24 hours notice due to additional testing requirements being cited by the Orion program, adding months to the realigned test schedule, which in turn added further strain to the already heavily-delayed Orion PDR (Preliminary Design Review).

Orion contractor Lockheed Martin were already complaining last year about continued changes to the requirements of vehicle, which is likely to undergo another major change during the upcoming summit meeting, after it was noted the switch from a crew of six to four will be a lead item for discussion.

Several vehicle systems have been progressing through their development cycle to plan, but have subsequently suffered via waiting for related systems to catch up due to technical challenges, or return to a steady funding cycle, in turn causing a schedule mismatch “ripple effect” through the master timeline.

The summit will attempt to realign all the individual schedules, find potential funding ‘get-wells’, and create a viable timeline to try and bring Ares and Orion back into the March 2015 IOC target. However, confidence this can be achieved without a major boost to Constellation funding is classed as low.

The serious nature of the “broken” schedules have been known for a few months, with an immediate slip of six months added internally to the master schedule, during a period when CxP were evaluating acceleration options. This occurred prior to the latest estimate of a slip of between 12 to 18 months – in total – on top of the current schedule.

Those acceleration options have since fallen by the wayside, with the worst case cost estimate coming in at around $7 billion just to bring the program back to the 2007 tatget of a 2014 launch of Orion 2. The priority now is to attempt to find a “magic solution” of bringing Ares/Orion in with a shot of making the March, 2015 IOC date. Avoiding further slips to the right is the goal, as opposed to acceleration of the schedule.

The situation with Ares is known in key areas of the Agency, with a “9th Floor” NASA HQ effort already taking place to evaluate the viability of cancelling Ares I, and replacing the launch vehicle with an EELV (Evolved Expendable Launch Vehicle) – such as an Atlas V Heavy or a Delta IV Heavy – whilst moving the Marshall Space Flight Center (MSFC) effort towards concentrating on Ares V.

NASA managers have alternative options, including COTS-D, which would initiate SpaceX into bringing their Dragon manned vehicle on line as a bufferzone during the gap. However, while NASA are supportive of SpaceX’s efforts, sources claim it would take a major leap of faith to hand the task of buffering the gap to such a ‘new’ space flight company.

Building up a head of steam is shuttle extension, with wide-scale support at both the program and political level. Initially curtailed by former NASA administrator Mike Griffin – who was firmly in the Ares camp – the strongest wording in favour of extension, at a program level, was seen this week on the Shuttle Stand-Up/Integration report, on L2.

“Last week, around 200 prime contractors and suppliers went to Washington D.C. and got briefs from the Hill and key NASA people,” noted the report. “They went over to the Hill and talked to over 100 Congress representatives or their staffers.

“The message was that the Shuttle is operating well and is safe to fly.”

That “message” directly counters Mr Griffin’s efforts to warn against extending the shuttle, after citing safety numbers that intimated a disaster was on the cards if the vehicles flew past 2010. It also makes the point the shuttle is an operating vehicle, whereas the alternatives remain out of sight.

The report goes on to note the need to avoid CxP from falling yet further behind its originally schedule – whereas previous statements have alluded to the possibility of acceleration – which is no longer viable without additional billions being pumped into the program, potentially the same amount it would take to extend the shuttle by two years.

“To close the gap it would be necessary to hold the funding to make sure the CxP does not move any further to the right, and to add additional funding if Congress deems it necessary to fly into 2011 and 2012,” added the report. “It was well received but these are tough budget times.”

There are conflicting numbers on how much it would cost to extend the shuttle program, with various options available. Most of the options opt for two orbiters flying though the extension, with one grounded as a ‘near flight ready’ orbiter that can supply spares to her two sisters. 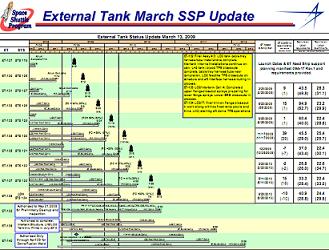 Program milestone charts acquired just this week by L2 confirm that the Michoud Assembly Facility (MAF) ‘additional’ tanks have been set up the purpose of pre-empting extension, with opening work completed on at least two brand new tanks past the yet-to-be-approved STS-134.

Should extension receive the required funding, MAF would be able to build new tanks, as all the shuttle related tooling has been protected via the outlines in the recent Senate Bill. However, a decision will need to be made soon, with layoffs of key skill set workers already taking place in New Orleans, and a systematic shutdown of shuttle related contractors soon to head past the point of no return.

The end of April has been deemed as D-Day for the shuttle program’s potential to extend. However, the in-built protection from the Senate Bill is understood to have gained enough time for the cut-off to be as late as the summer.

A lot will depend on what the next NASA administrator prefers, and more so the political will to find the best solution to ensure the United States does not suffer from a lack of domestic manned launch capability for over half a decade.