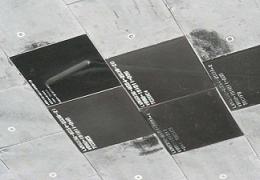 Following her 13 day mission in space on STS-119, Discovery is being deserviced inside her Orbiter Processing Facility (OPF-3), ahead of her next mission, STS-128. Close inspections of her Thermal Protection System (TPS) created a list of work that will be carried during her 101 day processing flow.

Discovery touched down on KSC runway 15 at 15:14:45 local time on Saturday, completing a successful mission installing the final solar array truss to bring the ISS to full power.

Once safed at the Shuttle Landing Facility (SLF), S0069 Integrated Roll-In operations picked up. Orbiter tow first motion from the SLF to OPF3 was at 18:46 local, before she was spotted in OPF-3 at 20:55. Fuel cell shutdown/ground power transfer was completed at 00:30 on Sunday.

TPS assessment began at 15:40 on Saturday, with engineers documenting most areas of Discovery’s heatshield, prior to being towed back to the OPF.

“Overall vehicle looked good. There was one protruding Ames gap filler, it was the gap filler seen on orbit,” noted the TPS assessment report on L2. “There were three instances of missing putty repairs.”

A special Boundary Layer Transition (BLT) Detailed Test Objective (DTO), which involved one tile on Discovery’s belly protruding slightly, was also inspected, with no damage reported in the local area.

Also reported were the thermal barriers on the Nose Landing Gear Door (NLGD), which provided close up views of an item of interest found during Flight Day 3’s RPM photography.

“On orbit ‘fray’ on Forward NLGD thermal barrier was actually frayed edge of patch, no damage to weave of fabric noted,” added the report, before listing other areas of interest on the forward section of Discovery. 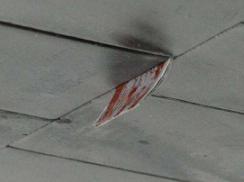 “Gap filler on the left hand inboard elevon was still present. The protrusion appeared to be the same as on orbit with no obvious effects of overtemp. The gap filler was confirmed to be 3 plies of Ames.”

“Left hand inboard elevon damage appeared to be the same as on orbit, with and estimated depth of .3-.4”. Rounding of damage edges indicates evidence of possible heating.*

Other items of interest included missing putty repairs on three tiles – which can be expected, a broken “piano key” tile on the body flap, and a protruding gap filler on one of Discovery’s OMS Pods – which have performed well since the couple of incidents with torn stitching between the tiles and the blankets.

“Discolorations noted on orbit aft of the LH ETD were not noted as abnormal on the runway,” the report added. “Piano key tile above the body flap had a large portion of the cantilever broken off. 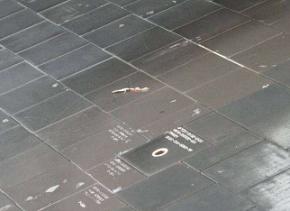 “Tile between engines 2 and 3 had an edge broken off. Piece of material debris identified on top of the RH (Right Hand) side of the body flap. Source unknown (see left image).

“OMS protruding gap filler noted on orbit as 500-001 was visibly frayed. It is notable that this portion of the gap filler was not noted as protruding on orbit.”

Further inspections on Discovery’s TPS are being conducted in the OPF, ahead of final deservicing tasks and preparations to enter her into the STS-128 processing flow, which has technically started with post STS-119 work.