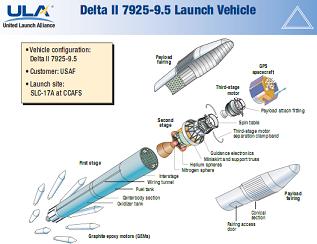 A United Launch Alliance (ULA) Delta II rocket has launched this morning, carrying GPS-IIR-20, the penultimate spacecraft of the current block of GPS satellites. Lift-off from Launch Complex 17A at Cape Canaveral was on time, at the start of a window running from 08:34 to 08:49 GMT (04:34-04:49 EDT).

GPS-IIR-20, which is also designated GPS-IIRM-7, is a navigation satellite which will be operated by the United States Air Force. It was the last Block IIR GPS satellite to be built, although one more remains to be launched.

GPS-IIR-20 will replace the GPS IIA-27 satellite, which has reached the end of its design life. In addition to the normal navigation systems, the new satellite carries an experimental L5 signal, which will serve as a technology demonstration for future aircraft navigation systems.

The next GPS launch will be of GPS-IIR-21 on 21 August, followed by the first launch of the next block of satellites, IIF – which is scheduled for 22 October on a Delta IV.

The Delta II will fly in the 7925 configuration, with an Extra-Extended Long Tank Thor first stage, nine strap-on GEM 40 solid rocket motors, a Delta-K second stage, and a Star 48B upper stage. The payload fairing is the standard configuration, with a diameter of 2.9 metres, or 9.5 feet.

The first stage is powered by an RS-27A main engine and two verniers, which will ignite about two seconds before launch. At lift-off, six of the nine SRMs will also light. These first SRMs will burn out and separate a little over a minute after launch, seconds before the remaining three ignite for their minute-long burn.

Just under four and a half minutes after launch, the first stage main engine will shut down, followed by the verniers. The first stage will then separate, and the vehicle will coast for five seconds before the AJ-10-118K engine of the second stage ignites for its first burn. Separation of the payload fairing will occur about twenty seconds later.

The first burn will last for six minutes and twelve seconds, before shutting down and initiating a coast phase that will last for a little under fifty two minutes. Following this, it will restart for forty two seconds, and then initiate third stage spin-up.

Subsequently, the second and third stages will separate, and the solid-fuelled third stage will ignite for an eighty-seven second burn. Once the stage has burnt out, there will be another two minutes of coasting, before the spacecraft separates.

From lift-off to payload separation, the launch will last about sixty-eight minutes, and will leave the satellite in a 193 by 20,370 kilometre orbit, with an inclination of 40 degrees. The spacecraft will then use its onboard propulsion system to reach its operational medium Earth orbit.

The Delta II first flew in 1989, and today’s launch will be its 142nd flight. Of these launches all but two have been successful. Both of the failures were due to problems with the solid rocket motors.

In August 1995, one of the solids failed to separate from the rocket launching Mugungwha-1. The payload was placed in a lower orbit than was planned. The satellite was able to raise itself to the correct orbit by means of its onboard propulsion system, however at the expense of much operational life. This launch was considered a partial failure.

The other failure was on the first launch of a GPS-IIR satellite, in January 1997, when a crack in the casing of one of the solid rocket motors resulted in the rocket exploding thirteen seconds after launch.

Despite these failures, the Delta II is one of the most reliable carrier rockets in service. This is its third flight this year, following February’s launch of NOAA-19, and the launch of Kepler earlier this month. The next Delta II launch is planned for 5 May, with the STSS-ATRR satellite for the US Air Force.