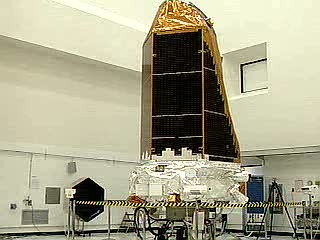 Launching on board the reliable Delta II rocket, Kepler’s journey to space will last just under 62 minutes.

Following ignition, the first stage of the Delta II rocket’s launch will last for four and a half minutes. During that time, the nine strap on Solid Rocket Motors (SRMs) – six of which are ground start SRMs and three of which are air-start SRMs – and the single RS-27A main engine will propel the rocket through the initial stage of placing Kepler into its proper orbit.

Finally, the third stage’s solid-fueled engine will burn for one and a half minutes, propelling Kepler out of Earth orbit and into her primary Earth-trailing solar orbit.

The reason for placing Kepler in such an orbit is to ensure that the Earth will never occlude the stars in Kepler’s field of vision or create light interference. Also, by placing the telescope in this orbit, the science teams will ensure that the constant gravitational tugs and wobbles that are prevalent in earth orbit will not affect Kepler, therefore creating a more stable viewing platform.

In this orbit, Kepler will orbit the sun once every 53 weeks. As such, will fall one week behind Earth every year.

Dedicated to the detection and study of extra-solar terrestrial planets that orbit their parent stars inside the habitable zone, the Kepler mission is the first in proposed series of missions that will study the characteristics of Earth-like extra-solar planets.

The habitable zone – or an area where water can exist in its three forms (most importantly in a liquid state) – is the main area of interest for Kepler and its science team, with Kepler’s main objective to determine whether rocky planets are a common natural formation.

To accomplish this task, the science team has broken down the Kepler objectives into six distinct questions:

“How many terrestrial planets (large and small) are there in or near the habitable zones of stars of varying spectral types; What is the assortment of sizes and shapes of the orbits of such planets; How many planets are contained within multiple-star systems; What are the various characteristics (i.e. orbit size, luminosity, mass) of short-period gas giants; Are there additional planetary members in already discovered extra-solar systems; and what are the properties of stars that harbor planetary systems?”

Unlike previous observations conducted by orbital and ground-base telescopes, Kepler will look at a swath of the sky roughly equivalent to the size of one’s hand if held at arm’s length. This area of observation will yield approximately 100,000 stars for Kepler’s science team to monitor for any trace of the tell-tale “dimming” effect that is caused when a planetary body passes in front of its parent star – a detection method known in the scientific community as the transit method of detection.

However, this form of direct observation requires that the extra-solar systems be inclined in a direct, or near direct, line of sight view with the telescope. If the supposed planetary systems are inclined at too great an angle, any planets they could contain would not pass between the observed star and Kepler, therefore negating the firm detection of any planets around those stars.

Thus, Kepler is well suited to answer the question “How frequent are Earth-like planets?”

However, the Kepler telescope will not just detect terrestrial planets during its mission. The telescope will also provide valuable data on larger, gaseous planets, of which over 300 have already been discovered in the last ten years.

In fact, this idea was incorporated into Kepler’s mission statement, which declares that the spacecraft’s purpose is to “explore the structure and diversity of planetary systems” in our galactic neighborhood.

While Kepler’s mission is slated to last for three and half years, the science team has taken the necessary steps to preserve the possible extension of Kepler’s mission for an additional three years.

This could prove vital to our search for Earth-like planets as the science team needs to observe three transits of a “detected planet” before they can confirm that they have, in fact, discovered a new planet.