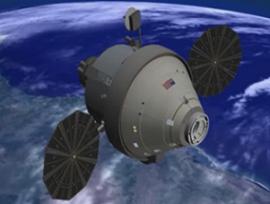 Lockheed Martin have recommended a switch of a 8Mbs Phased array on its Communications and Tracking (C&T) system to a combination phased array S-Band at low data rates with a High Gain Antenna – called Hybrid “Lite” – due to Orion’s mass and power issues.

The decision for the change was made in February at an Orion version of the Program Requirements Control Board (PRCB) meeting. However, the initial decision to stop work on the previous C&T architecture was made 10 months ago.

The primary reason for the change of the C&T system was based on the need to bring down Orion’s mass, due to shortfalls in Ares I’s performance.

“C&T Architecture Design Decision: Some history is that the Orion C&T sub-system received Program Direction in May ’08 to stop work on the 606E Comm system architecture and instead pursue a phased array, high rate S-Band system and delete Ka/High Gain antenna for mass savings,” noted an overview via MOD’s 8th Floor on L2.

Further issues with an interim replacement system led to Lockheed Martin – who are the contractor for the Orion vehicle – being instructed to perform trade studies on three alternative options.

“C&T then spent June to Oct ’08 doing a requirements realignment activity for submission back to Lockheed. Lockheed’s answer back to C&T in Dec ’08 identified unacceptable mass/power impacts to the vehicle under this new 8Mbs Phased array system.

“The Program then redirected C&T to have Lockheed go off and perform trade studies on three separate comm architectures to find a path forward. LM traded three main architectures:

“1. 606E – the baseline design from May of ’08 that included an S-Band system and a Ka-Band system (this design was broken from an ops assessment due to hot switching issues and being very power in-efficient).

“2. Hybrid ‘Lite’ – a combination of phased array S-Band at low data rates with a High Gain Antenna for both S-Band and Ka-Band at higher rates (fixed the hot switching issues and a lot better on power).

“3. 606E Modified – an improvement of 606E involving moving S-Band electronics out to the antennas themselves, thereby reducing line losses (also fixed hot switching, better on power but risky from a design maturity standpoint).”

Option 2 was recommended as the forward plan, which will have the appearance of a small satellite dish that will be deployed on the outside of Orion.

“The recommended architecture was Option 2, the Hybrid Lite system, which is also the design that Ops rated as most favorable,” added the 8th Floor. “With this system, Orion will have a High Gain Antenna (HGA) deployable dish that can be used for both S-Band and Ka-Band comm simultaneously.

“This will be in addition to a small phased array S-Band system that will nominally provide 72/192k data rates (with the ability for a 500kbps return data rate possible).”

Meanwhile, unconfirmed rumors are circulating about a potential baseline change to the ISS Orion, which would involve a reduction in the crew size the vehicle will be capable of transporting to and from the International Space Station (ISS).

While the Lunar Orion is already set to carry four crew on moon missions, studies have been created into looking at impacts of changing ISS Orion being reduced from a crew of six, to four. No specific reasons – such as new problem with Orion’s mass – are currently noted.

However, the potential change is not believed to be directly related to plans to install a cargo pallet in the place of one or two seats, which would allow for items to large for the lockers in Orion’s aft bay to be carried in in pressure vessel.

Notes were first seen on this potential change as a “failsafe” during the Zero Based Vehicle (ZBV) process, which successfully brought Orion back into line with Ares I performance margins in 2007.

Although recent media briefings with Constellation manager have insisted there are healthy margins – required for the ongoing work to add mass to Ares I via Thrust Oscillation (TO) mitigation – very few references have been made to the previous mass stripping effort to gain such allowances. These mass allowances – via “buy backs” – are understood to be small, as seen with the notes of mass issues related to the C&T system alone.

The Orion program is plagued with budget shortfalls, in part caused by “multiple configuration changes” that Lockheed Martin complained was “adversely” affecting the design process – and is still struggling to work through to the PDR (Preliminary Design Review) – which has been postponed several times, and may stretch into 2010.

Adding to the PDR problems was the recently scheduled HT-8 (High-Thrust-8) test, which was to be the was the last scheduled sub-scale test of the LAS (Launch Abort System) motor. The test was cancelled with a just a day’s notice, after Lockheed Martin sent instructions for major changes to both the motor and test equipment, delaying the test by months. 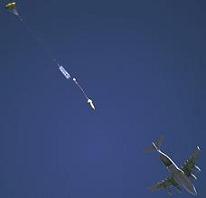 The JDTV was used to test the giant parachutes that will be tasked with easing Ares I’s five segment Solid Rocket Motor First Stage’s return to earth for splashdown in the Atlantic.

The scheduled test date (last Thursday) was postponed due to high winds – reaching over 70 knots at altitude – over the US Army Yuma Proving Ground, located close to the Arizona-California border.

Friday’s attempt – which was close to being cancelled due to high winds – was eventually postponed due to a problem with opening the US Air Force C-17’s ramp, from which the JDTV (a 50,000lbs system in total) would be rolled out of the back on a specially created pallet.

However, last Saturday, with the winds at an acceptable level for the JDTV to hit the 1×3 mi. of graded desert drop zone, and the use of a pry-bar to deal with the C-17’s ramp doors – the test was carried out successfully. 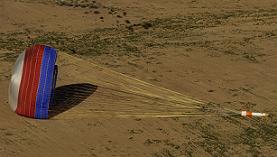 The JDTV – which is designed to be reusable – suffered only the expected dings of the desert impact, the pallet/cradle is also reported to be in good shape, and all the Ares parachutes are deemed to be without significant damage.

This was the seventh in an ongoing series of flight tests supporting development of the Ares I parachute recovery system, which includes a pilot chute, drogue and three main parachutes.

At least two more tests are scheduled for the JDTV and the giant Ares I parachute system, whilst the program awaits approval on studies conducted by Boeing, which have showed the C-17 aircraft can successfully drop up to 95k lbs using the pallet extraction technique.

In other news, the test schedule for the Max Launch Abort System (MLAS), has been moved slightly to the right, with the pad abort – utilizing a “boilerplate” Orion capsule – now set to take place in early April. Testing will be carried out at NASA’s Wallop’s facility.