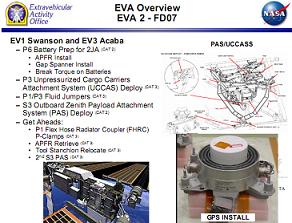 Due to the deletion of EVA-4 from the docked phase of STS-119, spacewalkers Joseph Acaba (EV3) and Steven Swanson (EV1) were tasked with a packed EVA-2 on Flight Day 7. Meanwhile, Discovery continues to perform like a champ, with no issues of note being worked.

Saturday’s EVA saw the spacewalkers prepare for the replacement of solar array batteries as a get-ahead for STS-127 – with Endeavour – later this year.

The work was carried out on the opposite end of the Station than EVA-1’s work on installing the S6 integrated truss, which allowed for an opportunity to take infrared photography of two sets of radiator panels, one of which has suffered a delamination.

As noted ahead of EVA-1, the spacewalkers had the additional protection against potential shock hazards, as they worked on the “end” of the ISS, which is more susceptible to the plasma environments the Station travels through in space.

Other tasks included the major goal of installing a GPS antenna on JAXA’s JEM module, which will aid the upcoming debut flight of the HTV resupply ship, slated for launch later this year.

The Mission Evaluation Room (MER) are currently working no additional IFAs (In Flight Anomalies) or “Funnies” of interest with Discovery, as the flight passes the half way mark.

One new – but still minor – issue was noted at the Mission Management Team (MMT), relating to the SSPTS (Station to Shuttle Power Transfer System), which suffered from a loss of a channel on its OPCU (Orbiter Power Conversion Unit).

“OPCU Channel 2A telemetry remained off-scale low indicating that there was no input power,” noted the MER summary of the issue as one of the presentations presented to the MMT (all available on L2). “This signature is indicative of a PTU (Power Transfer Unit) fault isolator trip.”

The SSPTS system can tolerate 3 OPCU channel failures and still remain operational, meaning no mission impact for this particular issue.

The most probable cause is likely due to a nuisance trip of the PTU channel 2A fault Isolator, though consumables assessments indicates there is adequate margin to support nominal end of mission without this channel. 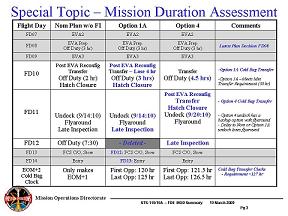 That nominal end of mission remains on track for a March 28 landing. However, the MMT have decided on a refinement to the end of the docked phase, in order to protect human samples that have been collected on the ISS over the last six months.

The samples need to remain at a certain temperature, and have been packed in special ice packs for their ride back on Discovery, being handed over to scientists on the ground.

Known as Option 4 on the MMT evaluation, hatch closure will be delayed to the morning of the nominal undock day on Flight Day 11, as opposed to the day before – which was the previous nominal option.

Following a flyaround of the ISS – along with the first real look of all four arrays in full display – Discovery will head for late inspections, which will ultimately clear the heatshield for re-entry.

Only one minor area of interest remains under the evaluation of the DAT (Damage Assessment Team), which relates to a gap filler which is protruding from the left elevon.

Due to its location, a peer review is double checking the gap filler won’t cause issues for the local TPS (Thermal Protection System), though this relates to Discovery’s processing flow work, as opposed to a vehicle safety issue. 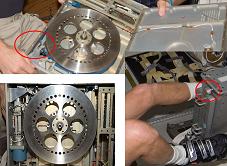 The only other issue that has gained attention during this mission related to the exercise bike onboard Discovery, known as the Shuttle Cycle Ergometer (SCE). While it may appear trivial, it is important for the crew to be able exercise, in order to protect their bodies from muscle loss whilst on orbit.

“IFM (In Flight Maintenance) procedure was performed and the crew called down that the calibration strap was moved and the ergometer is now working,” noted one presentation to the MMT. “The Project team has been informed that the crew successfully exercised after the EVA using the powered ergometer.

“The photos tell a slightly different story, but as the equipment is operating nominally for the crew, no further IFM is needed.

“Forward work: The team will review the video and perform further analysis of the photos as part of the root cause investigation. The team will be evaluating possible impacts to the STS-125 mission.”