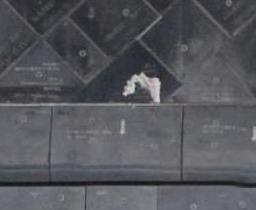 A complex ballet of robotics between the Shuttle and Station arms took place on Wednesday, as the S6 is transitioned out of Discovery’s payload bay ahead of installation on Thursday. Engineers on the ground have also cleared Discovery’s Thermal Protection System (TPS) from requiring a Focused Inspection.

The performance of Discovery continues to impress, with only two new issues – both very minor and with no mission impact – noted as of Wednesday morning.

Known as “Funnies” – the Mission Evaluation Room (MER) list now has a total of 11 items of interest, which is extremely low, with only a slight communications issue being added to the list, along with transient dropouts on the Laser Dynamic Range Imager (LDRI) on the Orbiter Boom Sensor System (OBSS).

On the ground, the DAT (Debris Assessment Team) worked through the hundreds of images gained from Flight Day 3’s RPM (10s of mbs of photos available on L2), in order to clear Discovery from a Focused Inspection.

So far 138 Regions Of Interest (ROI) have been found via the inspections that have taken place on Discovery’s TPS, which is slightly above average. During this stage of STS-126’s mission, Endeavour had 85 ROIs listed by DAT engineers.

No concerns were raised with any element of the heatshield, which has resulted in clearance for re-entry – via a call to remove the need for a Focused Inspection – being given during Flight Day 4.

The MMT did take a closer look at one tile at the aft of Discovery (port elevon) which has suffered some damage, but it is not a cause for concern.

Already cleared earlier in the day by the DAT engineers were all areas of Discovery’s RCC (Reinforced Carbon Carbon) panels on both wings of the orbiter.

“138 ROI’s required PRT disposition. All ascent threats cleared,” noted DAT. “One region of missing coverage has been addressed. As a result of this review the LESS is GO for entry. FD2 results will serve as the baseline for late inspection.”

The performance of Discovery’s External Tank during ascent will once again be highlighted as a major contributor to the healthy TPS, as the mitigation of foam liberation threats show a continuing trend of improvement.

However, it may never be known just how clean ET-127 was after the eight and a half minute ride to orbit, due to a problem with Discovery’s umbilical well camera flash, which was needed due to the dark conditions during ET sep.

The flash was programmed to trigger 22 times during separation. However, it is understood that it only flashed once.

“The Camera/Flash System did not appear to function within expected norms,” noted one outline to the Mission Management Team (MMT). “The Tank Centerline Camera appears to show some flash actuations, but the Main Bus B telemetry does not indicate flash operation.

“Additionally, the crew has been unable to establish contact between the Camera and the PGSC (Payload and General Support Computer) laptop. Subsequently, the images have not been downloaded.”

Alternative options for acquiring images of the tank post-sep are also unavailable due to the dark conditions for this particular launch. 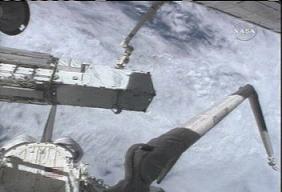 Whilst Discovery’s robotic arm held S6, Canadarm2 translationed to the S6 installation worksite along the Mobile Transporter (MT), before the SRMS passed the S6 Truss back to Canadarm2.

Due to lack of SRMS clearance with JEM Module and length of the ISS truss, robotics ops for S6 maneuvering are complex, as seen via the robotic movements as laid out in the Flight Readiness Review (FRR) documentation.

“SRMS uncradles and maneuvers out of the way to an S6 unberth viewing position. With SSRMS on MBS PDGF-1 (MT WS 6), SSRMS unberths S6 from Orbiter PLB. SSRMS maneuvers S6 to the handoff position,

The process of installing S6 will be focused on EVA-1 tasks on Flight Day 5, prior to the deployment of the arrays – which may take place on Flight Day 6, should managers decide against the need for a Focused Inspection on Discovery.

The importance of smooth robotics throughout the task ahead of installation are paramount, as outlined in the FRR documentation.

“Robotic failures during maneuvers to S6 install could lead to Inability for ISS to sustain Docking Loads,” noted the FRR. “Zero-failure tolerant during SRMS maneuver to S6-to-SSRMS handback

“SRMS is 0FT to achieving S6 handback position. SSRMS has capability to grapple S6 given any SRMS joint failure and allow the shuttle to depart. ISS unable to sustain subsequent Docking Loads unless S6 structurally mounted. 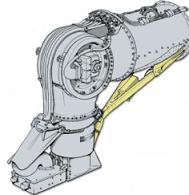 Also a late item of interest for the robotic operations – specially with the SRMS – was noted via an early release of the Shoulder Brace that holds the Shuttle Robotic Arm in a stable configuration during launch.

The arm is healthy and working within is required parameters. However, engineers have been working on models to ensure this remains the case, especially during high load operations, such as the S6 transition out of the Payload Bay.

“Analytical effort undertaken to verify structural health for launch with shoulder brace out. Confirmed Installation Issue,” noted a Flight Day 4 MMT presentation – which has been updated since Flight Day 2.

“All hardware remained within load indicator limits. As expected the shoulder inner sleeve load indicator showed the greatest increase in load due to the brace-out condition – 84 percent of its indicator load limit.”

As protection, it is understood that managers requested a slight decrease in the transition rates for the S6 operation with the SRMS. However, engineers are mainly utilizing time on issues – such as above – to refine their lessons learned to aid their understanding in the event of a more serious issue on a future flight.