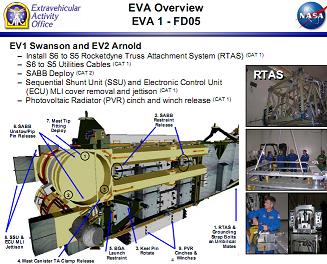 While the first truss segment to be installed to the ISS was the Z1 truss in October 2000, construction of the Station’s permanent Integrated Truss Structure began in April 2002 when the crew of Space Shuttle Atlantis’ STS-110 mission installed the S0 truss element to the Destiny Science Lab.

The Z1 truss element – installed during STS-92 – was designed to support the initial power configuration of the Space Station and provide a temporary berthing place for the P6 truss element and associated solar arrays before the P6’s relocation to the end of P5 during the STS-120 mission in October 2007.

For the first EVA of STS-119, the primary objective will be the installation of the S6 element to the end of the currently installed S5 element.

For the installation process, Swanson and Arnold will complete several prioritized Cat I and CAT II mission objectives – a prioritization schedule that has come into play on this mission because of the Soyuz crew rotation at the end of the month and Discovery’s later-than-expected launch date.

While S6 is the last truss element to be launched to and installed on the Station, it was, in fact, the first truss element built and tested on the ground – used as a prototype to debug issues before the its sister trusses were cleared for launch.

Once installed, the S6 truss will enable the Station to utilize full power from the solar arrays – a critical step toward the eventual increase of crew size from three people to six people this coming May as well as the installation of the JAXA Kibo exposure facilities this summer.

Highlighting the evolving nature of space flight operations are several updates to the “Caution, Warning, and Emergency” EVA procedures because of new power channelization on the ISS.

Noted in the SSP FRR documents is the risk of electrical shock for EVA crewmembers. “Electric Shock to EVA Crewmember from EMU Arcing to Plasma (Positive Charge and Negative Charge).”

In an attempt to mitigate this situation, the ISS Program has considered reorienting the station to the ‘YVV’ attitude; however, final thermal assessments will drive this decision.

As noted by the SSP FRR, the STS-119 crew can expect negative plasma “voltages worse than ULF-2 (STS-126) due to increase in solar activity and the addition of the S6 truss.”

One of the central issues surrounding this debate is the potential failure of the Plasma Contactor Units (PCUs) on the truss structure.

“Shunting not sufficient outboard of SARJ. Approximately -45V exceeds -40V limit after both PCUs fail. Operationally, this means EVA can continue after 1 PCU failure with at most 2 channels actively sun-tracking.”

A further improvement to EVA procedures is a change to the ever-evolving EVA glove configuration. 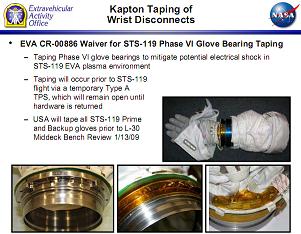 For STS-119, Kapton tape has been added to all glove wrist disconnects to provide additional margin against potential electrical shock when EVA crewmembers are in the plasma environment.

All the primary and backup gloves for STS-119 were taped back in January during the initial L-30 day preparations for launch. Furthermore, additional time has been added to the tool configuration timeline to ensure extra attention to the tethering of EVA equipment.

Analysis of STS-126 video and interviews with the Flight Crew indicate that all tether hardware performed nominally during that flight. As such, the new tool configuration timeline (complete with Intravehicular assistance) was added to STS-119 for extra safety margin.

Analysis indicates that all on-orbit trouble-shooting procedures are more than sufficient to accommodate this issue. As such, no further work is planned on this anomaly.

Finally, no SAFER rotation will be required during this mission. The three on-orbit SAFERs are ‘GO’ for STS-119 and are capable of supporting the mission’s EVA content.