Shuttle manager John Shannon has described Discovery’s performance as “amazing”, ahead of Wednesday’s undocking from the International Space Station (ISS). Discovery is now heading to Late Inspections of her Thermal Protection System (TPS) on Flight Day 12 of STS-119.

Final Shuttle/Station transfers took place prior to undocking, mainly relating to human samples stored in cold bags, which was the cause of the change to the plan relating to the departure timeline.

Normally the hatches would be closed the day before undocking, but to ensure the samples remained within their “thermal clock” ahead of being handed over to scientists on the ground, hatch closure was delayed to as late as was viable.

Rendezvous tools checkouts also took place ahead of the farewell between the crews of Discovery and the International Space Station, before hatch closure and leak checks.

Following undocking, Discovery performed a full, one lap, flyaround of the Station, which provided the first images of the ISS with all four of its solar arrays deployed – thanks to the successful delivery and installation of the final integrated truss segment, S6.

ISS Commander Mike Finke was asking for video of the flyaround, eager to see his newly grown Station.

Once the flyaround was completed, Discovery performed separation burns to increase the distance between herself and the ISS.

Refer to the live update pages for up to the second events, images and video.

Late Inspections will be completed before the distance between Discovery and the ISS are too great, allowing for the orbiter to return to the ISS in the event of serious damage being found during the final check of the Thermal Protection System (TPS). 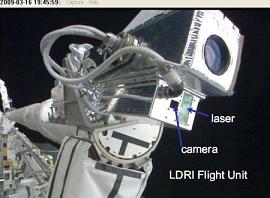 This procedure, utilizing the Laser Dynamic Range Imager (LDRI) and sensor suite package on the end of the Orbiter Boom Sensor System (OBSS), will take place on Flight Day 12.

Given the lack of damage observed during Flight Day 2’s opening inspections and Flight Day 3’s RPM (Rbar Pitch Maneuver) – which only found a handful of items that required clearance by the DAT (Damage Assessment Team) on the ground – the procedure will provide a “before and after” overview of Discovery’s heatshield, in order to check for any damage during her docked phase of the mission.

This is required in case Discovery suffered a MMOD (Micro-Meteoroid Orbital Debris) hit whilst docked. While serious damage is highly unlikely, due to the protection provided by the ISS when docked, orbiters can still be susceptible to hits, especially on their windows and radiators – as seen on previous missions.

The critical area of the RCC (Reinforced Carbon Carbon) Wing Leading Edges (WLE) also have the ability to “feel” impacts on their panels, via the WLE Impact Detection System (IDS). Daily presentations on the WLE IDS have noted no “triggers” of concern during the docked phase.

The importance of ensuring the TPS is in good condition for re-entry is obvious, with the teams on the ground literally inspecting ever inch of the heatshield. 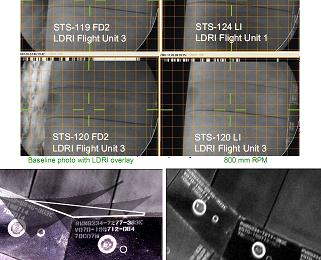 Due to the methodical nature of the inspections, even the slightest anomaly with the scans is raised to the Mission Management Team (MMT), as was one issue during Flight Day 2.

“Picture matching at the start of Stbd (Starboard) scan 2 while at pause pt 13 to image FD2 LDRI missed coverage of lower T-Seal (R7),” opened a technical presentation to the MMT on L2, which also relates to Flight Day 12’s Late Inspections.

The missing area of coverage, caused by a slight oscillation on the sensor package, is only a matter of inches across. However, thanks to the arsenal of data gained via the RPM and the WLE IDS – and flight history since Return To Flight – engineers on the ground already know the area in question has not suffered any damage of note.

“800 mm RPM imagery showed no damage (Detection Resolution 0.3”). No ascent WLE IDS triggers at the 7/8R interface. Coating damage in this region is acceptable due to increased lock side RCC thickness and redundant RCC on the Tee. Minor corrections to late inspection will adequately cover this area.

“To reduce the risk of this reoccurring for late inspection, we will make real-time adjustments to point the LDRI more like what was flown on STS-117 and STS-123 FD2. 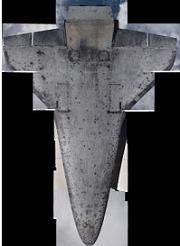 One of the last items to be cleared was a gap filler on the left elevon area of Discovery, which was observed to be protruding.

The concern with protruding gap fillers relates to their potential to disrupt – or “trip” – the flow of the super hot gases the orbiter will race through during entry interface. Such an event is not a crew/orbiter safety issue, instead it relates to the possibility of increased TPS re-works once she returns to her Orbiter Processing Facility (OPF).

This final item was cleared over the weekend, following a peer review to ensure the gap filler presented no concern to the orbiter.

“On the mission, the TPS was cleared on Saturday. The team did a great job of working through the gap filler,” added the Orbiter Project at the Johnson Space Center (JSC) . “Looking forward to late inspection on Thursday.”

Such has been the “clean” performance of Discovery during STS-119, Mr Shannon once again praised the teams, before rallying them to one final push to return the orbiter and crew home safely.

“We couldn’t have a better vehicle on orbit. It’s just amazing,” Mr Shannon noted. “Great mission. Let’s keep our focus. We’re going to be flying this entire week. It’s been going extremely well, and we just want to finish it up the right way. Thanks for everything you’ve done.”