The second launch attempt for STS-119 will take place on Sunday at 19:43pm local time, pending the expected resolution of the leak related to the Ground Umbilical Carrier Plate (GUCP) – which caused the scrub of Wednesday’s attempt. Engineers are currently in S007.300 scrub turnaround procedures, but are eight hours down on the timeline – according to a Saturday processing update.

Shortly after 2:00 PM EDT, as the hydrogen tank on the External Tank was nearing the 98% filled level, a hydrogen leak was detected in the Ground Umbilical Plate (GUP).

The GUP vent valve was cycled a number of times to see if the hydrogen leak could be reduced to acceptable levels, but without success. At approximately 2:25 PM EDT, the launch director decided to begin draining the External Tank and scrub the launch attempt.

Noted on the Booster console inside the Launch Control Center (LCC), an IPR (Interim Problem Report) was filed on the GUCP, due to high concentrations of Hydrogen – an observed LH2 leak at the GUCP ET Vent, at a concentration of 5.5 percent.

“LCC (Launch Commit Criteria) allows for leaks less than 4 percent (but not expected). Greater than 2 percent leaks require an IPR and starts the preplanned contingency.”

“During LH2 ET tank transition from fast fill to topping a leak (red line high) was detected by both LH2 leak detectors at the GUCP. Tank fill was stopped and the vent valve was cycled to try to eliminate the leak with no success,” added another memo outlining the procedure undertaken. “The line was purged with helium to reduce the concentration of Hydrogen.

“Following this, the valve was cycled with hydrogen and the concentration increased confirming the leak was still present. The IPR was transferred to ET Mechanical Engineering for further disposition. Troubleshooting began after boil-off was complete and the area was cleared for access.”

Once the tank had boiled off the residual LH2 – a process that was required in order to inert the tank – engineers gained access to the work area, and have been following a pre-planned procedure of finding the origin of the leak, along with preparations to repair the area in time for the Sunday launch.

Engineers are currently eight hours down on the timeline, following a problem with pivot assembly relating to the GUCP. Re-torque operations are now set to be completed at around 18:00 local time on Saturday. Sunday’s launch attempt remains on at this time.

In parallel, engineers have been working on PRSD (Power Reactant Storage and Distributation) cathode activation, which is now complete, as is the GH2 Recharge.

FWD RCS (Forward Reaction Control System) Tyvek cover removal and replacement for Sunday’s launch is currently in work, while LH2 and LO2 tanker replenishment is also being carried out.

Sunday’s attempt will – in effect – be a test of the remated GUCP, although it is hoped that a confirmed hardware fault will be found in order to add confidence there won’t be a repeat issue during Sunday’s tanking, allowing for Discovery to launch as planned.

At present, the issue appears to be related to a gasket between two ground side components, near the end of the GH2 vent arm, which is a relatively short fix. A misalignment of the seal – which is possible when the stack has been out at the pad for an extended period of time – would also be solved by the remating of the GUCP.

“The indications lend themselves to a seal leak due to misalignment or failure at the GUCP interface,” noted a memo from the Mission Management Team (MMT). “The preliminary plan they laid out was for a seal repair timeline which has them R&R the seal Friday, remate on Friday, reconnect ordinance and closeout, get back into the sequence.”

Allowing the Sunday attempt is boost for the mission duration, which is restricted by the Soyuz cut-out. A full four EVA mission is no longer possible, although only one EVA is required for the primary task of installing Discovery’s payload – the S6 truss – to the International Space Station (ISS). 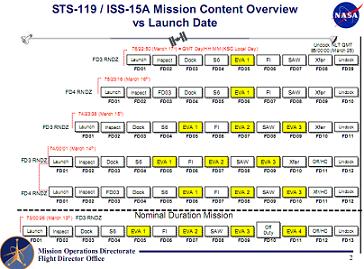 Thus, launch attempts are available on both Monday and Tuesday – if required – before the mission would have to be deferred to after the Soyuz cut-out – which is released on April 7.

The preference for a shorter mission duration, as opposed to waiting until April, relates to ensuring STS-125’s flagship mission to the Hubble Space Telescope remains on its current May 12 target.

“(MMT) will also discuss the mission implications at a high level for a Sunday, Monday, and Tuesday attempt. We get down to 3 EVAs for Sunday, two for Monday (which is refined from the original three EVA potential), and one for Tuesday, so we are in a mission content reduction mode,” added the MMT memo.

“ISSP (International Space Station Program) reenforced their desire to launch up through Tuesday, even with the one EVA content. We have mission objective priorities laid out and on this mission we will definitely use them.

“I know the day to day unknowns aspect is difficult for the team but given the limited window, each day lost carries significant mission content impacts so it is prudent to be ready when the vehicle is ready.”